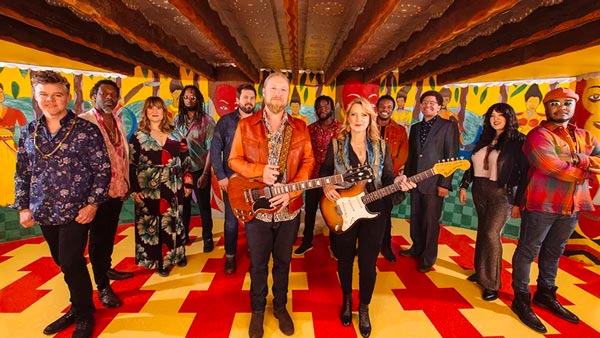 The 2022 residency run already included four shows at The Chicago Theatre this past January, and the 2022 Beacon Theatre shows mark the group’s 11th multi-night Beacon run, and will include their 50th lifetime show at the famed theatre on October 3. Tedeschi Trucks Band’s annual tenure in the Big Apple is a destination event – featuring surprise sit-ins, special guests, and set lists that go deep in the band's catalog – and has become a can't-miss concert experience.

“The Beacon is always a place for us to stretch out and explore musical territory,” says Derek Trucks. “We have an incredible amount of new material coming out this year with I Am The Moon and The Beacon shows will be some of the first where we'll be able to draw from all of it and have the space to really dig in."

The 2022 residency will feature support from Amy Helm on Thursday, September 29 and Ruthie Foster on Thursday, October 6.  Monday, October 3 will mark the band’s 50th show at The Beacon. Friday and Saturday night shows will feature two sets of Tedeschi Trucks Band. The Beacon run will also be one of the few opportunities in the U.S. to catch the band live after all four albums of I Am The Moon are released.

Susan Tedeschi adds, "I Am The Moon is a creative milestone for us – and we've got our 50th show at The Beacon, another milestone. We're looking forward to celebrating both and all the hard work that went into getting here –  it's not something that just happens."

Operatic in scope, and epic in scale, I Am The Moon is the most ambitious studio project of Tedeschi Trucks Band’s storied career – comprised of four albums – I. Crescent, II. Ascension, III. The Fall, and IV. Farewell – and four companion films, all of which will be released in successive months throughout the summer. The first film debuts Tuesday, May 31 followed by the first album release available digitally and on CD, Friday, June 3. Inspired by a mythic Persian tale of star-crossed lovers, the thematic I Am The Moon totals more than two hours of music unfolding across a robust tapestry of genre-defying explorations that propel the treasured American ensemble into new and thrilling creative territory.

Tickets for all seven Beacon Theatre shows will be available for purchase by the general public beginning at 11:00am (ET) on Friday, May 13 via ticketmaster.com. Tickets will also be available at the Madison Square Garden, Radio City Music Hall and Beacon Theatre box offices on Saturday, May 14. Prices range from $29.50 to $135.00.