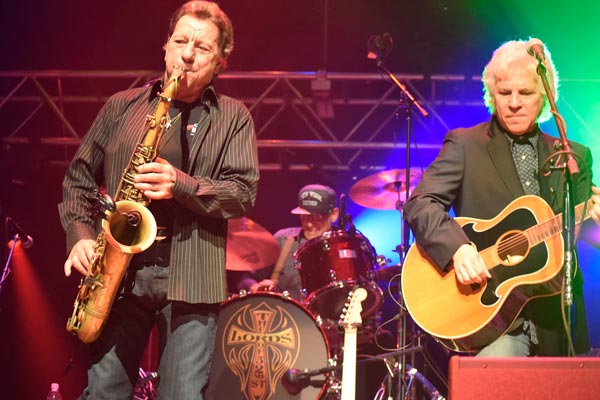 (MORRISTOWN, NJ) -- Enjoy the music of Billy Joel as performed by his original band members! Featuring Richie Cannata on tenor saxophone, Liberty DeVito on drums and Russell Javors on rhythm guitar, The Lords of 52nd Street are the musicians who performed with Billy Joel in the 1970s and 1980s and were heard on albums such as The Stranger, 52nd Street, Glass Houses and The Nylon Curtain. The Lords perform at Mayo Performing Arts Center (MPAC), Friday, June 10 at 8:00pm. Tickets range from $29-$65.

Before they were The Lords of 52nd Street, you could find them playing at local clubs in Long Island under the band name, “Topper.” Topper was a 1960s high school rock and roll band originally formed by Russell Javors on guitar and vocals, Doug Stegmeyer on bass, and Liberty DeVitto on drums. The band was drawing a large audience at the time, but bassist Doug Stegmeyer quickly flew out to California to audition for the “Piano Man,” Mr. Billy Joel.

Joel was looking to form a new band that will record and tour with him regularly. Stegmeyer was immediately accepted into the Billy Joel Band, and Joel asked if Stegmeyer knew any other players, specifically a New York style drummer. Stegmeyer recommended his Topper bandmates, Russell Javors and Liberty DeVitto, for the part. DeVitto frequently played gigs with Joel’s high school band “The Hassles” at Plainview’s My House. To say the least, Joel and DeVitto were not foreign to each other’s playing. No one ever expected these musicians would cross paths again, and help form one of pop music’s most famous bands.

Doug Stegmeyer, Liberty DeVitto and Russell Javors joined Billy Joel in studio to record his 1976 album Turnstiles. Billy Joel was also looking specifically for a saxophone player who can play keyboards. Al Stegmeyer, Doug Stegmeyer’s father, was a sound engineer on the album, and recommended Richie Cannata to play saxophone and keyboards on the album. Cannata walked into Ultrasonic Studios in Hempstead, New York, and heard for the first time the legendary hit, “Angry Young Man.”

The Turnstiles album was a huge success because Joel and his new recording and touring band performed the songs with such a fresh, and young driven beat. DeVitto, Javors and Cannata blew away audiences with their playing, and helped Joel sell millions of albums.

Phil Ramone and Joel coined DeVitto, Cannata, Javors and Stegmeyer as The Lords of 52nd Street, and went into Columbia Studios to record, The Stranger. The album was a commercial success, it holds a RIAA diamond certification (10x platinum), and several #1 singles including, "Only The Good Die Young" and "Just The Way You Are."

Joel and The Lords of 52nd Street returned to the studio, and recorded Grammy award winning albums including, 52nd Street, Glass Houses, and The Nylon Curtain. The band recorded and toured with Joel for over a decade, and it wasn’t until their induction into the Long Island Music Hall of Fame where they decided to reunite after a 30-year separation. After their 2014 hall of fame induction, The Lords of 52nd Street picked up their instruments yet again, and began performing in front of live audiences together.

Fans declared that The Lords’ live performances sound just like the original recordings with Billy Joel, if not better. The Lords of 52nd Street perform regularly for live audiences in public and private events, and continue to awe fans from around the world.

They are New York’s favorite band, they sold more than 150 million records, they helped establish Billy Joel’s formidable sound, and they continue to perform their legendary hits still to this day. Look no further; The Lords of 52nd Street are here!