Music lovers are ready and waiting this Tuesday, September 20, 2022 at Holmdel, NJ’s PNC Bank Arts Center for an afternoon concert by the legendary singer and producer, Jay Siegel, and his Tokens, along with Staten Island, NY entertainer Vinnie Medugno.

A free event presented by the Garden State Arts Foundation, VP Ron Gravino welcomes the audience joking, “Today is ‘Staten Island Day’ at the PNC Bank Arts Center!” Cheers emanate from the crowd composed primarily of senior citizens along with a group of students seated in the front of the open-air amphitheater. 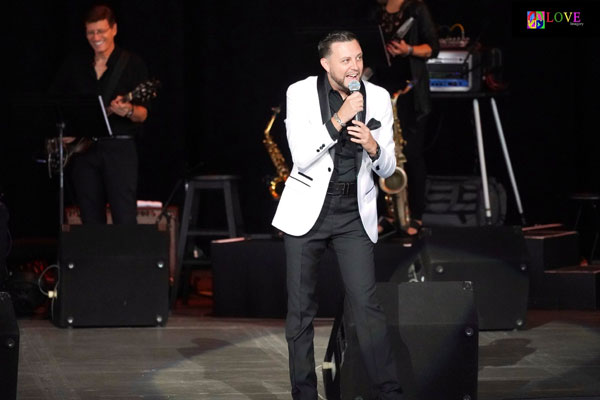 Getting the crowd clapping along to Andy Williams’ “More,” Medugno croons, “More than the greatest love the world has known,” his warm baritone and charming demeanor entrancing the audience before he asks, “Are you ready for a great show today?”

The crowd replies in the affirmative and Medugo exclaims, “PNC, make some noise!” as he introduces The Chiclettes — Deanna Caroll, Susan Marten, and Sarah Tracey — a trio of backup vocalists who add three-part harmonies to Medugo’s bouncy rendition of Lou Christie’s “I’m Gonna Make You Mine.” 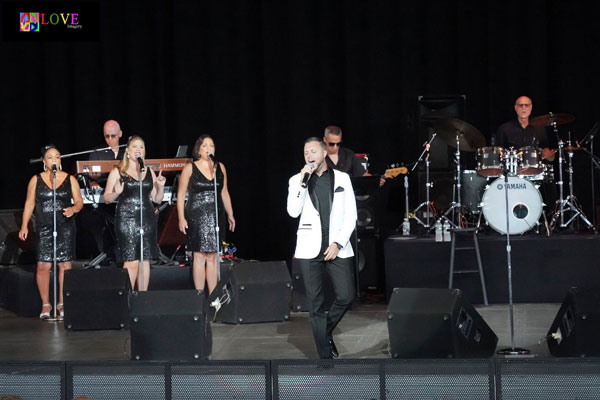 Medugno — who, in addition to being a singer and radio DJ, is also a high school media studies teacher — exclaims, “My school is here today!” prior to launching into the Herman’s Hermits’ arrangement of “Silhouettes.”

Holding the mic out for audience members to sing along on the tune’s catchy “Took a walk and passed your house/Late last night” lyric, Medugno engages his students who are here to learn, first-hand, about live entertainment and musical performance.

Medugno addresses his students, explaining to them that, today, they will be hearing “good music,” describing it as “music that was cool back when most of today’s audience was in high school.”

Following “Volare,” his tribute to singer Bobby Rydell, Medugno launches into one of the highlight numbers of his set, his interpretation of Gene Pitney’s “Town Without Pity,” which he recently performed on TJ Lubinsky’s PBS television show, Doo Wop, Pop, and Soul Generations. 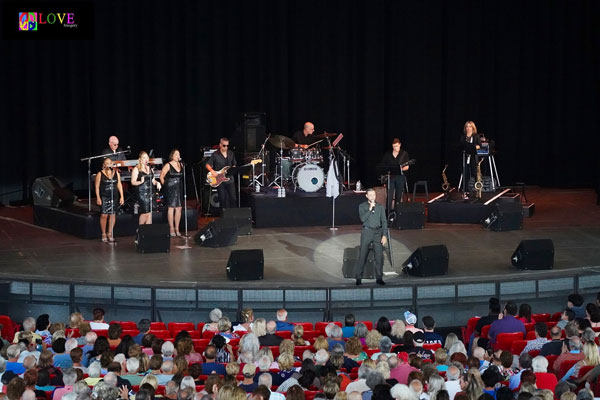 Mary Beth Ryan-Mastropaolo’s sax wails and The Chiclettes sing haunting background lines before Medugno follows up with an emotional performance of the Gene Pitney ballad, “I’m Gonna Be Strong,” which elicits cheers from music lovers in the crowd.

Following his rendition of Paul Anka’s “Tonight, My Love Tonight” and a vocal duet with The Chiclettes’ Deanna Caroll on Anka’s “I Believe There’s Nothing Stronger Than Our Love,” Medugno sings in both English and Italian on his next selection, “Il Mondo.” Dedicating the song to a couple in the audience celebrating their 53rd wedding anniversary, Medugo serenades the pair as they dance in the aisle to the music. 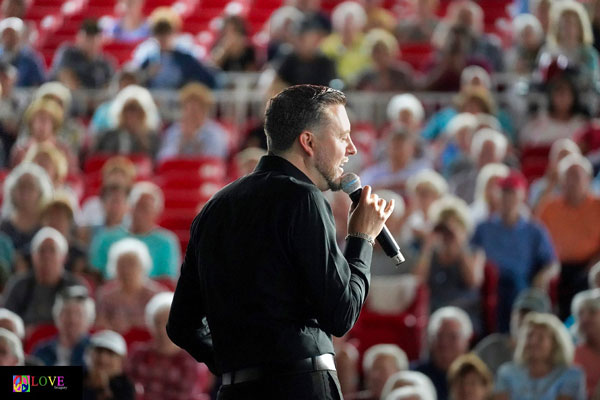 A powerful and emotional rendition of Elvis Presley’s “Hurt” has audience members on their feet, and a sparkling performance of The Archies’ “Sugar Sugar” has concertgoers clapping and singing along as Medugno makes his way down into the audience to sing, dance, and shake hands with fans in the crowd.

Music lovers happily sing along with Medugno on Dion’s “Runaround Sue” as he continues to stroll through the PNC Bank amphitheater waving to fans and greeting them. Making his way back onto the stage, he dances with saxophonist Mary Beth Ryan-Mastropaolo. 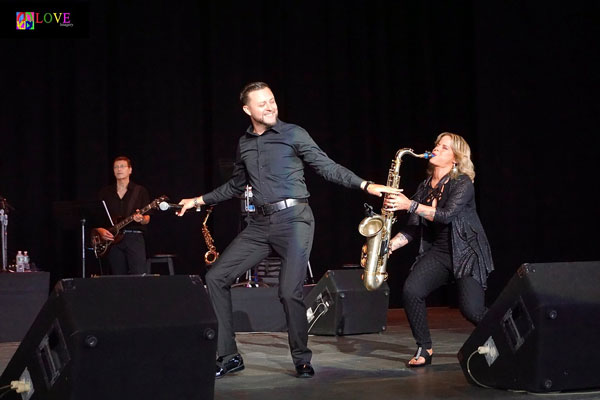 Music lovers cheer when Medugno sings his signature song, “Cara Mia,” a number which was originally recorded by Jay and the Americans. Using his full voice along with his falsetto, his powerful performance provokes a standing ovation from the crowd.

Medugno concludes his set with an up-tempo rendition of Sam Cooke’s “Twistin’ the Night Away,” which has concertgoers of all ages up on their feet and having a great time.

“Give it up for The Coda Band and The Chiclettes!” announces Medugno as he makes his way offstage to enthusiastic cheers and applause.

During a short intermission, we chat with several of Medugno’s students about their teacher’s performance this afternoon.

Says Gabriella from Staten Island about Medugno, “As always, his singing was amazing!” revealing, “He always walks around singing in the hallways in school.” Alexa from Staten Island concurs, divulging, “He dances all the time in school, too,” prior to noting, “His stage personality is exactly the same as it is in school when he’s teaching us about television and media.” 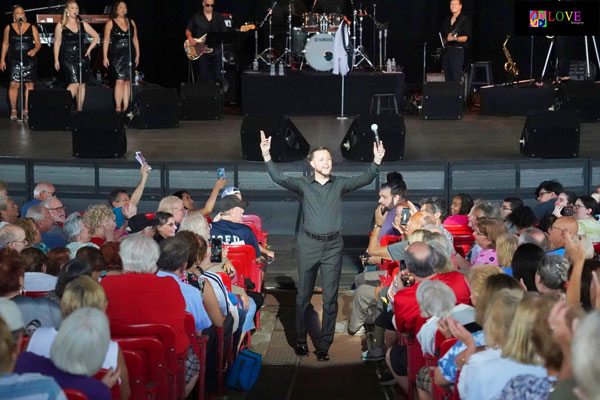 Notes Frank from Staten Island about Medugno, “He really inspires all of his students. He teaches us that we can get anywhere with hard work,” prior to acknowledging, “I was really surprised by his singing today. I never really heard him sing like that before!”

Lastly, we chat with Brandon from Staten Island who calls Medugno “the best teacher in the world,” exclaiming, “He was excellent today — I was blown away!” Continuing, “I’d seen clips of him performing on video, but a live experience is on a whole different level,” Brandon concludes by noting, “He has a true passion for music and performance — plus I thought all the instrumentalists and backup singers were great, as well.”

The audience claps along to The Tokens’ 1961 hit, “Tonight I Fell in Love.” Music lovers sing along on the “Dom, doobie dom, woo-ooh, doobie, doobie” refrain before Jay Siegels’ trademark falsetto rings out on the “Tonight, tonight I fell in love” lyric. 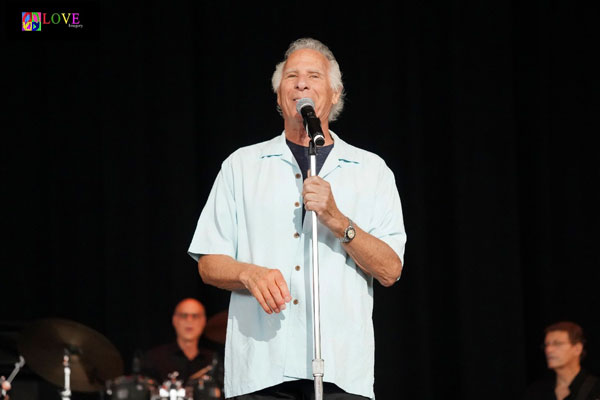 Crooning with style and ease, Siegel, 82, makes the years melt away for many in the crowd who fall in love all over again with the music of their youth.

Siegel talks about the “B-side” of “Tonight I Fell in Love” before he and the group perform “I’ll Always Love You.” On this number, his stagemates’ rich, lush harmonies float out over the audience as they accompany Siegel’s clear falsetto voice. 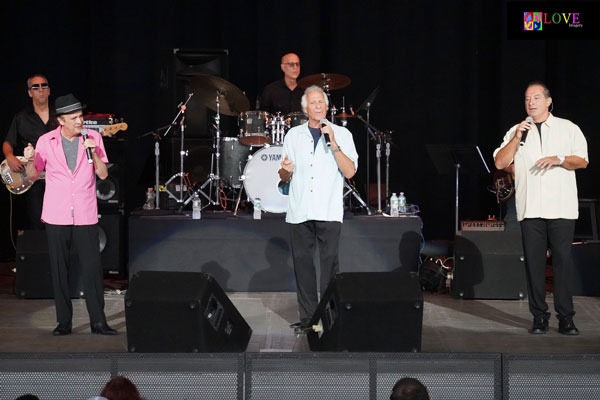 After joking, “We’re going to do a new song — which we recorded in 1967!” Siegel prepares to sing one of The Tokens’ best-loved recordings of the era when his musical director, Dennis DeBrizzi, comes downstage with his iPad to remind Siegel of the name of The Tokens’ song, “Portrait of My Love.” 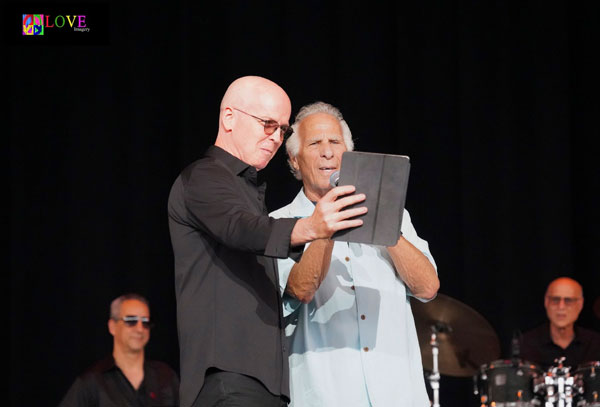 Singing, “There could never be/A portrait of my love/For nobody can paint a dream,” Siegel and his Tokens provide a record-copy rendition of the group’s 1967 Top 40 hit which brings avid cheers and applause from the audience.

Kurt “Frenchy” Yahian is featured on the trio’s interpretation of The Temptations’ “My Girl.” His soulful vocal impresses concertgoers, and Siegel gets everyone to sing on the song’s “Hey, hey, hey” lyric. The group follows up with two hits which Jay Siegel worked on as a record producer — The Happenings’ “See You in September” and The Chiffons’ “One Fine Day.” 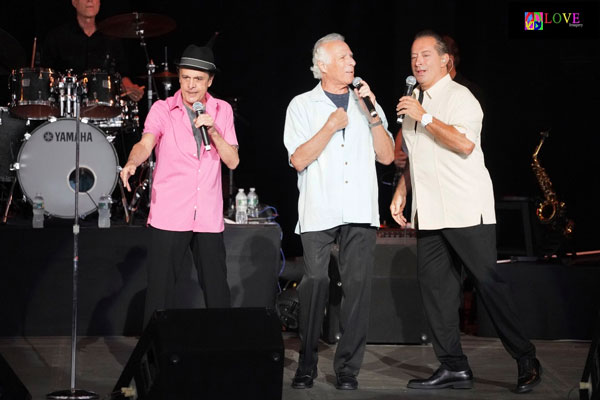 Siegel introduces the group’s newest member, Gabe Dassa, as The Tokens launch into a medley of ’50s love songs including The Rays’ “Silhouettes,” The Penguins’ “Earth Angel,” Sam Cooke’s “You Send Me,” Robert and Johnny’s “We Belong Together,” and Johnnie and Joe’s “Over the Mountain, Across the Sea.” Concluding with Don and Juan’s “What’s Your Name,” the crowd responds with avid cheers and applause. 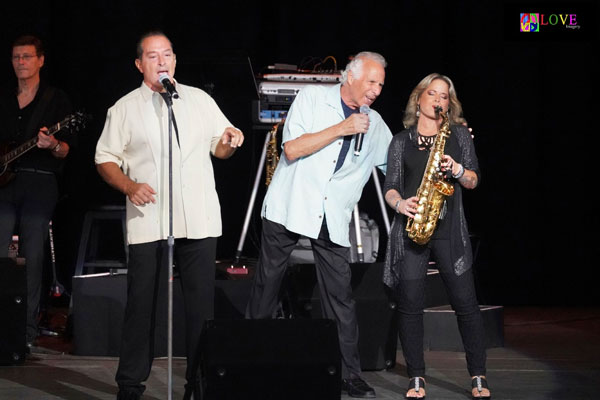 Siegel introduces the rest of The Coda Band — Dennis DiBrizzi on keyboards, Joe DeAngelis on guitar, Paul Page on bass, and Pete Mastropaulo on drums — before launching into “Please Write,” a Tokens’ song which Siegel dedicates to all veterans and their families.

After Siegel talks about growing up in Brooklyn and singing on the beach with his high school friends, he and the Tokens thrill the audience with their timeless rendition of the group’s biggest hit, “The Lion Sleeps Tonight.” Their extended live version of the song has music lovers throughout the PNC Bank Arts Center on their feet clapping and singing along before Siegel and the Tokens wave goodbye and exit the stage to the sounds of The Coda Band. 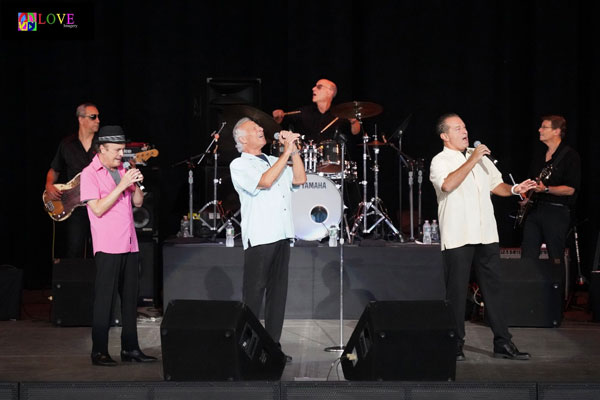 As audience members file out of the amphitheater, we chat with several music lovers in the crowd who share their thoughts on today’s show. Exclaims Caroline from Manalapan, “Jay Siegel’s Tokens were superb — they put on a phenomenal show!” Her husband, Bob — who originally hails from Brooklyn — reveals, “I was in the same class as Jay Siegel in high school,” before noting, “I loved his performance, and I loved Vinnie Medugno, too!”

Sharon from Marlboro declares, “Today’s show was amazing — this kind of music lifts all of the people!” Acknowledging, “Jay Siegel is a great performer. He has a wonderful voice and personality, and I loved hearing ‘Portrait of My Love,’ which was my wedding song!” Sharon adds, “and Vinnie Medugno has a special gift, too! He’s a great singer and performer who really knows how to work a crowd.” 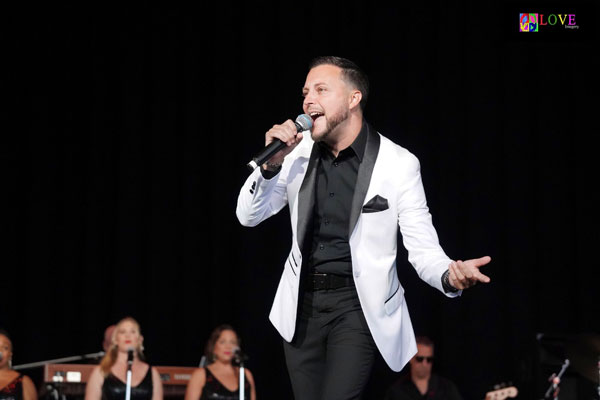 Whereas Judy from Mullica Hill calls today’s event, “One of the best shows I’ve seen here — such amazing voices!” Ross from Mullica Hill contends, “I was happy to see Vinnie Medugno’s high school students here today,” explaining, “I went to that same high school myself, and I think kids need to see performances like this which can really broaden their exposure.”

Stephen from Rockland County, NY calls Jay Siegel’s performance this afternoon, “Amazing!” adding, “The crowd just loved him!” His young son, Ben, reveals, “I liked all of the songs today, but ‘The Lion Sleeps Tonight’ was my favorite,” explaining, “I liked when he sang high — that was exciting!”

Lastly, as we make our way out of the PNC Bank Arts Center, we chat with Jay Siegel himself who, when asked how he enjoyed performing here today, replies, “I hope you can see that when we’re on stage, we have as much fun as the audience!” Continuing, “You can’t explain the feeling we get from the crowd,” Siegel concludes by declaring, “We just love what we do!”’ 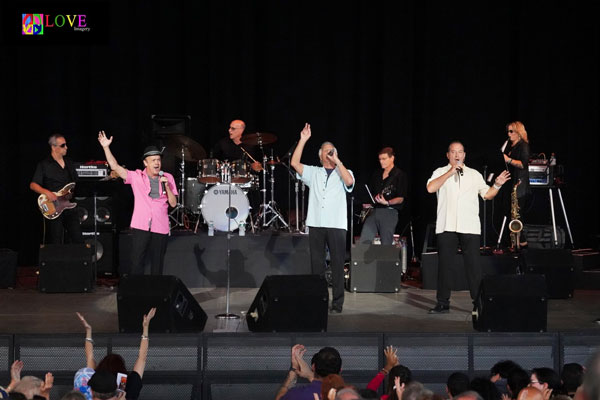