Makin Waves with The Smithereens: 'It's Love We Need Everyday' 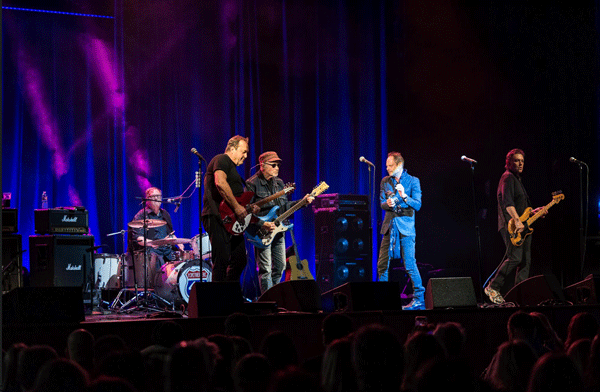 The Smithereens are back and busier than ever!

In September, surviving members Jim Babjak, guitar; Dennis Diken, drums, and Mike Mesaros, bass released “The Lost Album,” an LP originally recorded in 1993 for self-release after they no longer were on Capitol Records but shelved when they got picked up by RCA. They also reissued 2007’s “Christmas with The Smithereens” on green vinyl. Both releases were on L.A.-based Sunset Blvd. Records.

In addition to that Jim, released the original Christmas single, “It’s Love on Christmas Day” b/w “Christmas Eve, without Your Love,” as well as the deliciously smooth Babjax Coffee, a new brand of brew that sold out its first run.

The following chat with Jim previews The Smithereens’ second annual homecoming appearance on Dec. 3 at URSB Carteret Performing Arts & Events Center with fellow Carteret favorite sons and New Jersey Hall of Famers Dennis Diken and Mike Mesaros. Once again, longtime friend and collaborator Marshall Crenshaw will be filling in on vocals on behalf of the late, great Smithereens front man Pat DiNizio, as will several special guests. The Smithereens also will play March 16 at Ardmore Music Hall in Ardmore, Pa., with Marshall on vocals. Robin Wilson of Gin Blossoms also fronts the band from time to time, including The ’80s Cruise in March.

Why and how is Carteret important to The Smithereens?

Carteret is where we learned how to play our instruments and get serious about becoming professional musicians. It was a great town to grow up in. Having blue-collar work ethics is how we were raised.

How has the town changed since you grew up here, and why do you think that is?

Change is necessary with the times. It can never be like it was in the 1960s. Even back then, some of the buildings were over 100 years old. It’s just impossible to renovate them. Mayor Dan has been doing a great job moving the town forward with all the improvements by the river and especially with the new Carteret Performing Arts and Events Center.

It has a state-of-the-art sound system, and there’s plenty of parking, which is a problem in a lot of other towns.

Would The Smithereens like to play CPAC every year?

It’s always nice to come home and see old friends and new friends. So, yes, I would love it!

Who will be singing with The Smithereens this year at CPAC?

Marshall Crenshaw is singing with us. There might be some surprises.

The Smithereens recently released ‘The Lost Album’ on L.A.-based Sunset Blvd. Records, but the original idea back in 1993 was for the band to release it own their label after parting ways with Capitol Records. Why didn’t that happen back in 1993, and why did it take another 29 years for it to come out?

We were then signed to a contract with RCA Records in 1994, and it was only for one album. By the time we recorded another album, we had already written new songs and as an artist, you always want to use your most current songs. After our lead singer Pat DiNizio died, I was listening to some of my archived cassettes and realized that our fans would love to hear these songs.

What do you like most about ‘The Lost Album’ and why?

For me, it’s a time capsule. Songs that were frozen in time and forgotten now have a new life.

Do remember what it was like producing yourselves for the first time, and are there any lessons from that you still utilize today?

We always had a hand in producing our recordings, even when we had a producer. Everyone in the band has good musical sensibilities. We always had a good balance in the studio knowing when to be serious and when to let loose. We would always eat together, have some laughs, talk about everything and anything, and then get down to business to make a record. It was natural for us. Still is.

In releasing it, how much was the album changed since you first recorded it?

It is untouched from where we left it in 1993. The original master tapes were destroyed in a fire, and all we had was a DAT cassette mix, which we remastered.

Are The Smithereens writing new songs, and if so, will you be releasing them?

We are currently writing new songs with Marshall Crenshaw and Robin Wilson. Hopefully, we will be able to record in 2023 and release a brand new record. We still have a lot of music in us.

How did Babjax Coffee come about and why?

I have a friend who is a coffee roaster, and I jokingly asked him one time if he can blend bourbon with coffee. That didn’t work out, but he did blend it with rum flavor, and it was fantastic. About six years ago, I incorporated Babjax Coffee Co. My original idea was to open up a café that also sold vinyl records. I gave that idea up for various reasons but then decided to just sell coffee online. 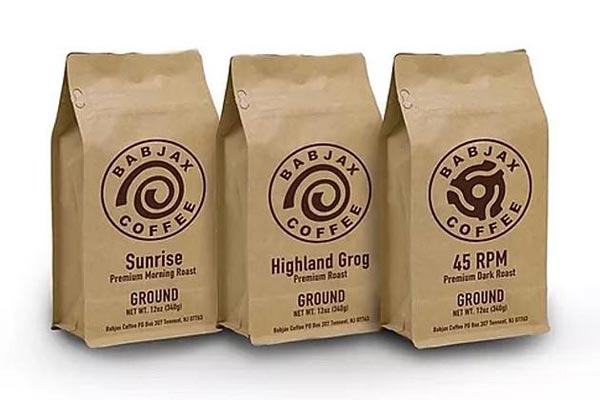 Smithereens guitarist Jim Babjak now can add coffee brew master to his resume with his new Babjax Coffee, a smooth cup of joe that sold out its first batch. PHOTO COURTESY OF BABJAX COFFEE

How is Babjax Coffee unique?

It has a smooth taste and isn’t bitter. It puts you in a good mood and smells like heaven. It’s a good way to start the day.

What has the response to your coffee been?

I sold out of the first batch and it takes about three weeks to have more roasted. It’s small batch, so it’s always fresh. Response has been very positive.

What else are you and the other members of The Smithereens up to outside of the band?

There are two new Christmas releases available. One is an album that we recorded in 2007 which has been out of print for a long time but is now available on green-colored vinyl and on CD. I’m also releasing a solo Christmas 45 called, ‘It’s Love on Christmas Day.’ They are available from our website at officialsmithereens.com.

For me, Christmas has always been a time of peace and reflection. And in this time of COVID-19 and divisiveness, my song’s message couldn’t be more simple: ‘It’s love, we need it every day.’