(RED BANK, NJ) -- Two River Theater celebrates the tenth season of one of its most popular programs, A Little Shakespeare, with one of William Shakespeare’s most iconic plays, Romeo and Juliet. This production asks the question, “What if Romeo and Juliet were not the first Montague and Capulet to fall in love?” This fresh adaptation by Diana M. Fathi explores the audacity of a new generation to defy an inherited family feud. A Little Shakespeare: Romeo and Juliet will run December 2 - 11, 2022 as a 75-minute abridged version performed and supported backstage by local high school students and directed and designed by theater professionals.

“It’s hard to believe that this will be our tenth Little Shakes production!” muses Director of Education Kate Cordaro. “So many students over the years have explored these brilliant plays with us and we are incredibly proud to have worked with all of them. This cast and team are bringing their A game; it is no easy feat to bring to life a new point of view for this play, but I believe that this production is truly special. You won’t want to miss it.” 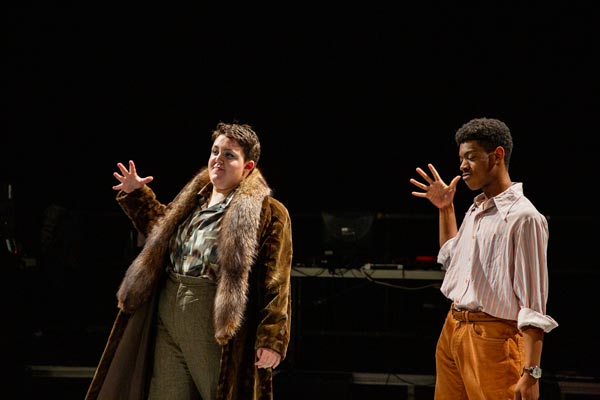 A scene from A Little Shakespeare's Much Ado About Nothing. Photo by Lauren Klain Carton

Learn more about all of Two River’s Educational offerings at https://tworivertheater.org/education/

Two River Theater produces a theatrical season that includes American and world classics, new plays and musicals, programs for young people, and festivals of new work. Each year, we also offer 40+ events that reflect our diverse community of Red Bank, New Jersey. Two River produces work on two stages—the 350-seat Rechnitz Theater, and the flexible 110-seat Marion Huber Theater. The theater’s recently opened Center for New Work, Education and Design is a three-story facility that includes two rehearsal studios, artist labs, classrooms, expanded shops and centrally located offices. Two River Theater has commissioned and premiered original projects including Be More Chill by Tony Award nominee Joe Iconis and Joe Tracz (the theater’s first Broadway production) and Hurricane Diane by former Playwright-in-Residence Madeleine George (which won an Obie Award for its Off-Broadway run). In June 2019, Two River was nationally recognized by USA TODAY as one of “10 great places to see a play” across the U.S. Two River serves thousands of students and community members through arts and humanities programs at the theater, in schools and throughout its region.