(BRANCHBURG, NJ) -- Raritan Valley Community College’s (RVCC) Arts & Design department will present a benefit faculty concert, Sunday, October 23, at 2:30pm, in the Welpe Theatre at the College’s Branchburg campus. Proceeds of the concert will go to the RVCC Applied Music Fund, which assists the College’s Music program and is dedicated to improving facilities and student resources.

The concert will feature pianist Anna Keiserman and violinist Robert Radliff, both of whom teach at RVCC. The program will include Ludwig van Beethoven's Violin Sonata No. 7 in c minor op. 30 #2; Nikolai Medtner's Three Nocturnes; and Claude Debussy's Violin Sonata, one of his last completed works.

Russian-born and New York-based pianist Anna Keiserman (shown at the top of this article) is known for her creative programming and polished, powerful, expressive playing. She has performed in New York City at Le Poisson Rouge, the Weill Recital Hall at Carnegie Hall, and the Fête de La Musique at the invitation of the French-American Piano Society. Other notable venues include the Strand Theater (Hudson Falls, NY) and Ateneu Barcelonès (Barcelona, Spain). Highlights of the 2022 season have included concert tours and masterclasses in Minnesota and Virginia, and a recording of solo piano works by composer Jordi Cervelló. A recording of Bercesue-Lament for saxophone, bassoon, and piano by Marc Migó Cortes is scheduled to be released this fall by PARMA Records label. 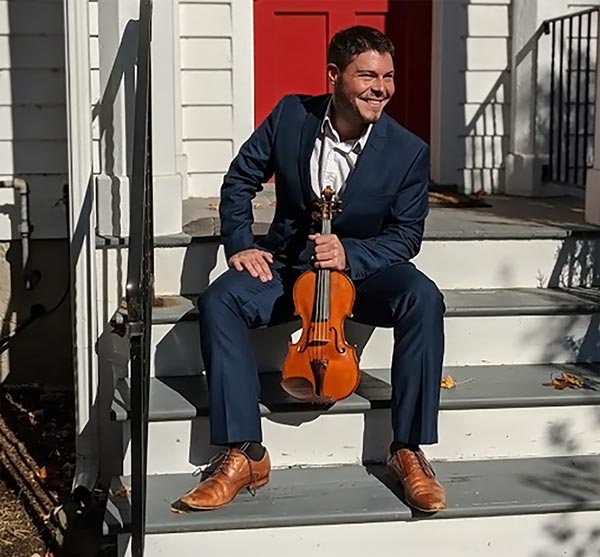 Robert Radliff (shown above) has been featured as guest soloist with numerous orchestras in Florida, New York, New Jersey, and along the East Coast, and has collaborated with such iconic musical figures such as Yo-Yo Ma, Itzhak Perlman, and Jamie Laredo. Internationally, the violinist has performed chamber music in such settings as the East China Normal University, Western District Chamber Music of Hong Kong, and the “Konzert im Kirchgarten” series in Hanover, Germany. He is currently the Concertmaster of the South Orange Symphony and performs as section violinist with the New England Symphonic Ensemble at Carnegie Hall, the Binghamton Philharmonic, and the Berkshire Opera Festival in Great Barrington. He is the founder of the New Jersey Chamber Players and the concert series known as “Music in the Library” at the New Jersey Institute of Technology’s Littman Library.

A post-performance reception will follow the performance. Tickets, at $15 for general admission, $5 for seniors (there is no charge for students), may be purchased at the box office on the day of the concert.