(BRADLEY BEACH, NJ) -- The first public reading of award-winning playwright Gary Morgenstein’s explosive new play Free Palestine - a probe into issues torn from the front-pages of newspapers: academic freedom, political correctness, free speech, and the perils of parenting, all triggered by the firing of a Jewish teacher of Israeli-Palestinian studies for not being “balanced enough”—will premiere at Congregation Agudath Achim, 301 McCabe Avenue in Bradley Beach, on Sunday, September 4 at 7:00pm.

There will be a talkback and dessert reception following the reading. Tickets are $10 made payable to Congregation Agudath Achim. 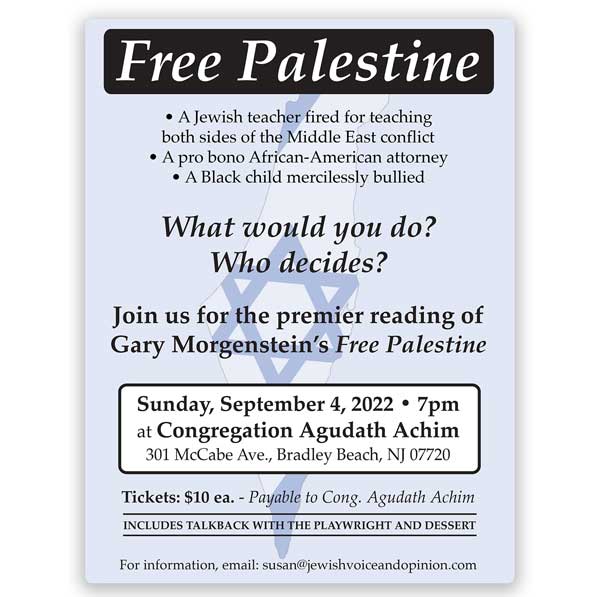 Gary Morgenstein’s novels and plays have been featured in national media from The New York Times, Entertainment Weekly, Parade Magazine, the New York Post, and Sports Illustrated to NPR. An award-winning playwright, Morgenstein’s multi-generational drama A Tomato Can’t Grow in the Bronx about a Jewish working-class family in 1968 has been nominated for six 2022 Perry Awards by the NJACT including Best Original Play following its April premiere at Center Players in Freehold. The funny drama will premiere December 2-17 at the Chain Theater in Manhattan.

Morgenstein’s Broadway World award-winning (for Best Play) A Black and White Cookie, depicting the unlikely friendship between a conservative African American newsstand owner and a politically radical Jew, premiered in July at New York City’s The Tank theater and was hailed as “fascinating” and “a heartwarming story”. An accomplished novelist, his books include the critically-acclaimed dystopian political novels - beginning in 2098 after America has lost World War Three - A Mound Over Hell (“1984 Meets Shoeless Joe”) and A Fastball for Freedom (“a dystopian Field of Dreams”), bhcpress.com.