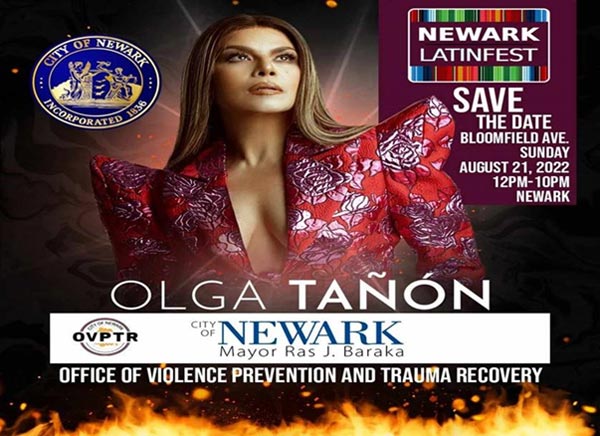 (NEWARK, NJ) -- Newark Mayor Ras J. Baraka, Deputy Mayor for Community Engagement Jacqueline Quiles, and the Office of Violence Prevention and Trauma Recovery will host the Annual Latin Festival on Sunday, August 21, from noon to 10:00pm, on Bloomfield Avenue between Lake Street and Clifton Avenue, in Newark's North Ward. The event is themed Newark Forward Minus Violence Equals Our Future. The event is free and open to the public.

"The Latino community is an integral part of our city," Mayor Baraka said. "I am pleased and honored to continue to bring Newark back together in a festival that showcases the best parts of our city: our diversity, our sense of community, and our musical and artistic culture. I invite Newark families to come out with us to celebrate."

DJ Reymo will also star at the event.

The Office of Violence Prevention and Trauma Recovery will have representatives present to give out information and connect residents with resources about mental health, employment, relocation, and services for those who have been affected by crime and violence.

"The Annual Latin Festival is a great opportunity for Newark families to enjoy a fresh and wholesome cultural experience," Deputy Mayor Quiles added. "This year's festival promises to be bigger than before. The Department of Community Engagement is determined to ensure that both children and adults can enjoy every aspect of the event."

"The Office of Violence Prevention and Trauma Recovery will be a proud host and sponsor for the Latin Festival. We will be collaborating to bring awareness and resources to the North Ward. The office will have 15 to 20 other partners supporting us with resources. We are bringing a message of hope and healing to the Latin community," said the office's director, Lakeesha Eure.

Coolers, pets, and youth on bikes or scooters are not permitted at the event. Residents and attendees are encouraged to takes advantage of the City's scooter and bike share program. They should be left on Clifton and Bloomfield Avenues, near the Latin Festival. There will be additional car parking in Branch Brook Park.

If you are interested in becoming a sponsor or participating in the Latin Festival, please contact Deputy Mayor Quiles at the Office of Community Engagement at (973) 733-4310.