There is Much to Say about 'Much Ado... 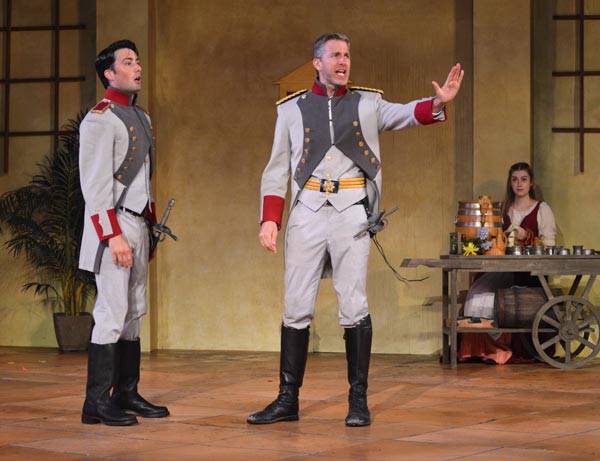 The outdoor stage summer season for the Shakespeare Theatre of New Jersey is going full blast these days with a perky, colorful production of William Shakespeare’s Much Ado About Nothing, about which there is much to say. The play is jam packed with the elements that have made the Shakespeare Theatre’s play on its outdoor, amphi-theater stage at St. Elizabeth’s University, just down the road from its indoor and permanent home at Drew University in Madison, successful. There is a gorgeous stage setting, beautiful costumes, actors running up and down the aisles in the audience, people dining on the lovely grassy grounds before and after the show and, oh yes, and it is an element, all of the airplanes, their engine roars making more noise that the applause of the audience, flying overhead.

In Much Ado…  Don Pedro’s victorious army has arrived at quiet Messina to celebrate. Its leaders will dine with Leonato, a bombastic wealthy landowner and local political figure. There, they will soon see that the battles within the house are far worse, perhaps, than the battles on the field. In the house, there is love all over the place, more than on a television soap opera, but who is loving who? There are plenty of feuds, but between who? There is a power struggle, but you have to fit that in between the feuds. Are you following all this? 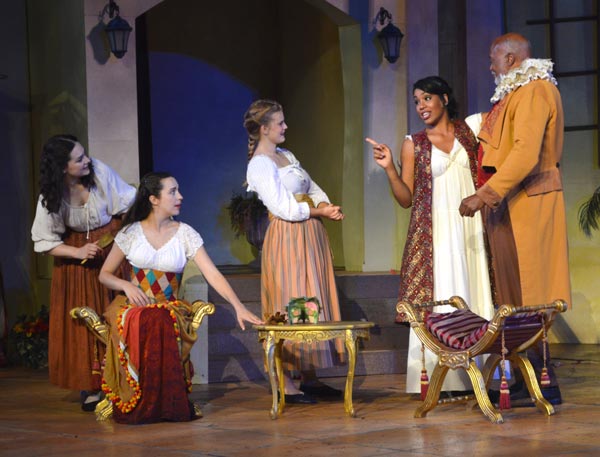 And there are airplanes, enough to win a few wars. All of the airplanes, I lost count at 15, take off from nearby Morristown airport and make a lot of noise. The beauty if them is that director Eleanor Holdridge, who has done a fine job of making this play pretty spritely and enjoyable, does not ignore them, but makes them part of the play. At first, an old man runs out of the mansion to fume about the planes, pointing at them and frowning. Then, plane after plane, the cast stops whatever they are doing to gawk at the planes (as if they didn’t see a lot of planes back in the late 1500s!).

All are there for the marriage between Count Claudio and Leonato’s daughter, Hero. In the background we have a love affair between Benedict and Beatrice, the cousin of Hero. They engage in pretty funny repartee and a lot of head shaking and eye rolling. 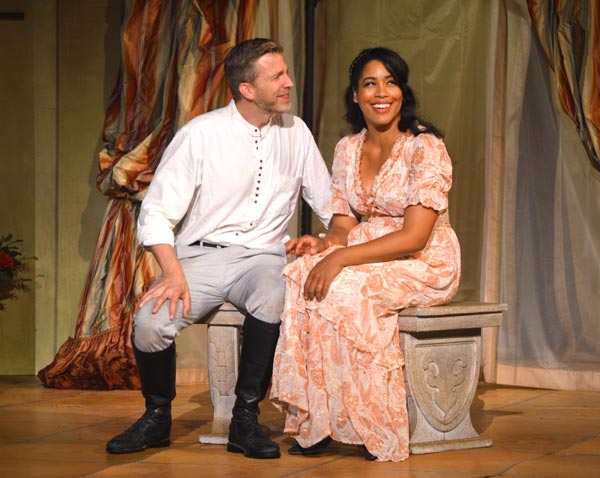 People hide in make believe bushes, rib each other, deflect lies about their relationships to each other and third parties. There is an hilarious scene in which a very military officer keep turning around the hat of an old man who lives with the family. It draws a lot of laughs.

In fact, there is a lot of comedy in the play, and not just between Benedict and Beatrice. A lot of eye rolling, too.

And of course, there are all of those planes. You see so many of them that you mistake any sound in the theater, such as a man sneezing, as the sound of a plane taking off.

Director Holdridge has done a fine job of creating a good story out of a lot of Shakespearean dramatic jagged edges. She gets fine performances from Benjamin Eakeley as Benedict, Jesmille Darbouze as Beatrice, Michael Stewart Allen as Dogberry, Raphael Nash Thompson as Leonato, Richard Bourg as Antonio, James Michael Reilly as Don Pedro, and Fiona Robberson as Hero. Other talented actors in the production are Jeffery Marc Alkins, Jabari Carter, Dino Curia, Christian Frost, Ellie Cossage, and Caroline Leys. 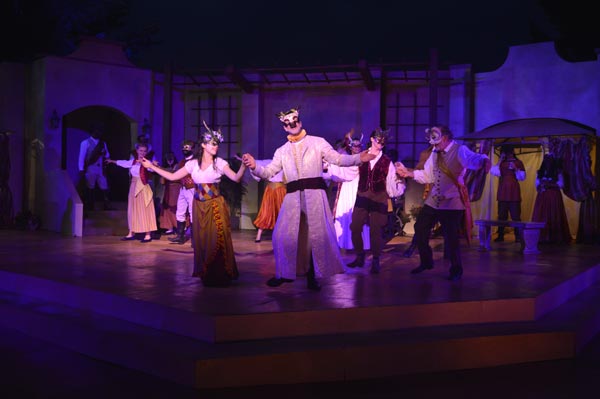 I don’t remember the names of all the planes…

All of these elements make Much Ado About Nothing a fine play to see and a lot of fun.

Director Eleanor Holdridge’s creative staff has done a superb job with this play.  Scenic designer Charlie Calvert has done wonders in creating a mansion and courtyard in old Messina.  Hunter Kaczarowski has put the performers in lovely costumes from the era, Scott Killian created a fine sound system and Matthew Weisgable did the lights. 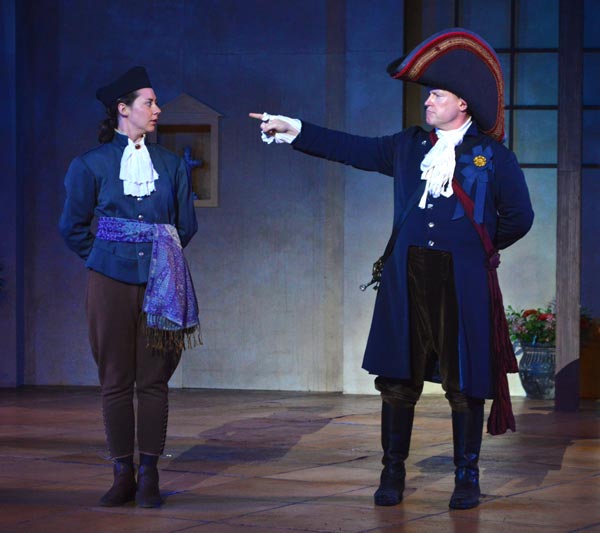 The one problem in the play is the confusion in the plot. Right away, Shakespeare has got you thinking who loves who and who is going to marry who? Is the heroine of the story, a young woman named Hero, but is she really Hero, or is some other woman hero? Or a hero, or heroine? There are visitors but are they really friends? Who’s is going to marry tall, muscular, handsome Benedict? Who does he lust after? The mix ups and confusion ruin through the play and really make you concentrate. This is not good.  Remember the old saying that you need a scorecard to follow the story? Here, you need five or six scorecards. This is not the problem of the actors or the director. It was Shakespeare’s problem. I have seen the play several times and was confused on each production. How could Shakespeare, who wrote such impressive plays, have stumbled through this one? 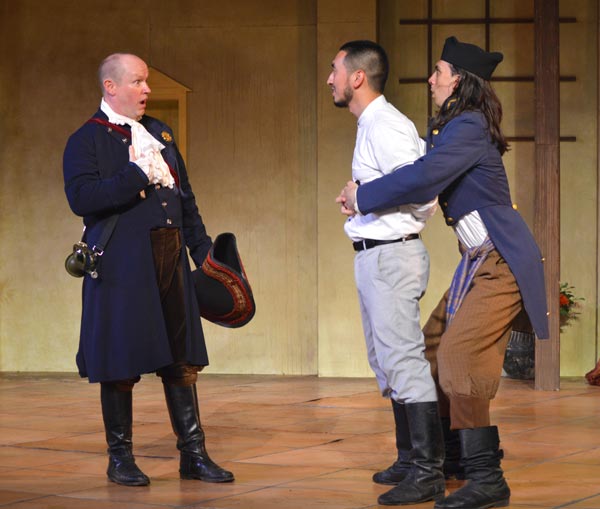 So if you want to see this charming play, get yourself to the outdoor theater – and watch out for the planes!

The Shakespeare Theatre of New Jersey presents Much Ado About Nothing on the outdoor stage through July 31st.  The outdoor stage is located at 2 Convent Road in Florham Park, New Jersey. For ticket information, click here. 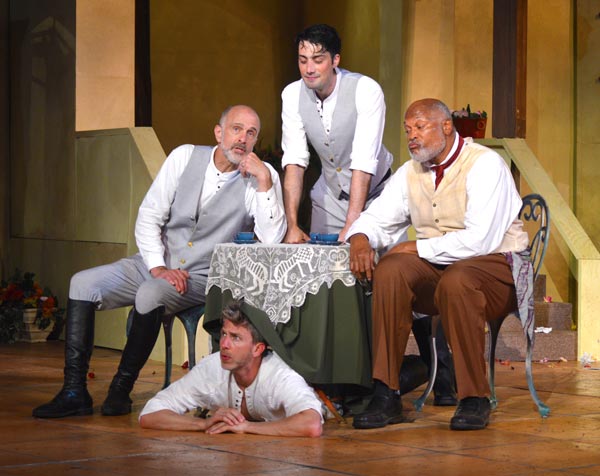 All photos by Sarah Haley