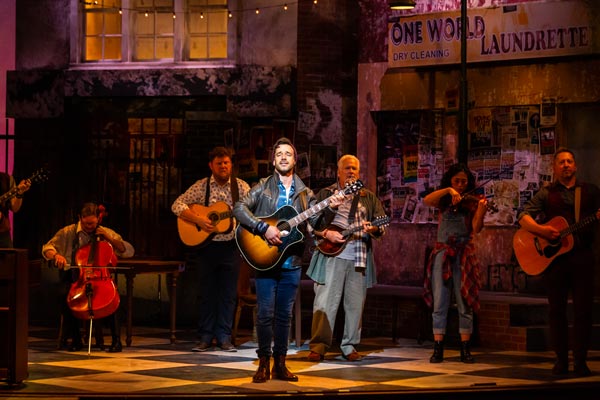 Most people loved the 2007 movie Once. Most New York critics loved it when the story opened there as a musical and grabbed several Tony Awards. I finally caught up with it Sunday at the Colonial Theater in Pittsfield, Massachusetts, in the Berkshires, where so many New Jersey resident go on vacations. For me, Once was enough.

I kept shaking my head as to why I was not crazy about a love story that had enthralled millions.

Once is the story of two people who meet on a street in Dublin and fall for each other. The relationship between the two, and two previous lovers, is tricky. The man, simply identified as Guy, and the woman, named Girl, are brought together by music. Guy, a songwriter living in Dublin, is singing one of his songs and he is overheard by Girl, who is enraptured by his music. At the end of the song he puts his guitar down on the pavement and walks away, apparently finished with all music and his old girlfriend, who dumped him and moved to America. Girl ties to get the whole story, but Guy is squeamish about it. She presses him and presses him. He mistakenly thinks she only wants sex from him and tries to satisfy her, but it’s not sex that she wants. She wants him. 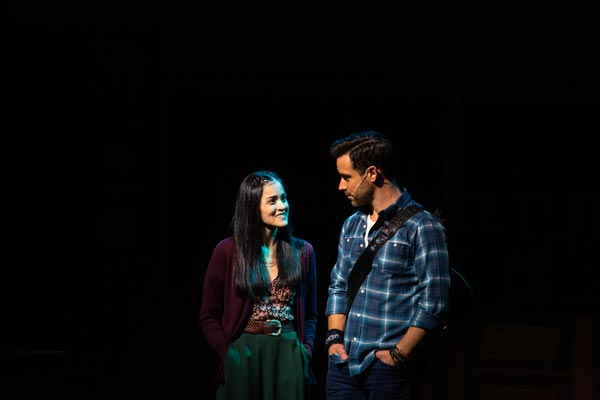 Her come on is that when he tells her he fixes vacuums for a living, she blurts out that her vacuum is broken and needs repairing.

What follows is sort of a traditional lovers’ duel of emotions on a street and in a wonderfully designed  pub in Dublin. She plays piano and accompanies him on songs he wrote. She gets him to do a demo taping in an Irish studio, with her playing the piano and a bunch of bar musicians, men and women friends of hers, joining them. He comes to think that he can be a successful songwriter, thanks to her. She comes to think she can be “whole” again, with him. 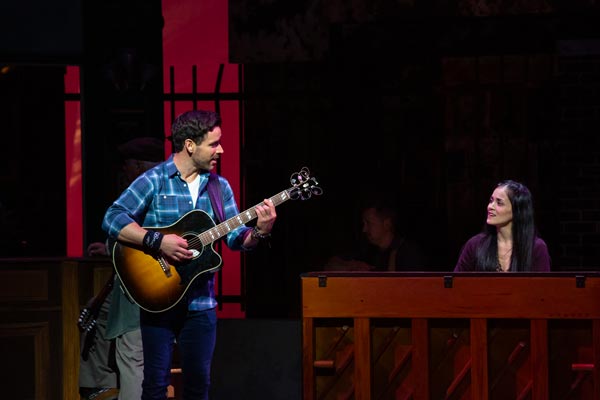 All will work out.

Well, that’s where the struggle comes in. She encourages him to become a success so strongly that he decides to leave Ireland and travel to America and go to record companies. He also wants to see his old girlfriend, who, when she appears in the play, I’m sorry, is really not worth seeing again. Love is blind, though, right?

Now, just about this whole story takes place amid group of eight Irish bar musicians who turn into   characters in the story. She wants all of them, her close buddies, to be friends with him. He tries to do that with them, too. 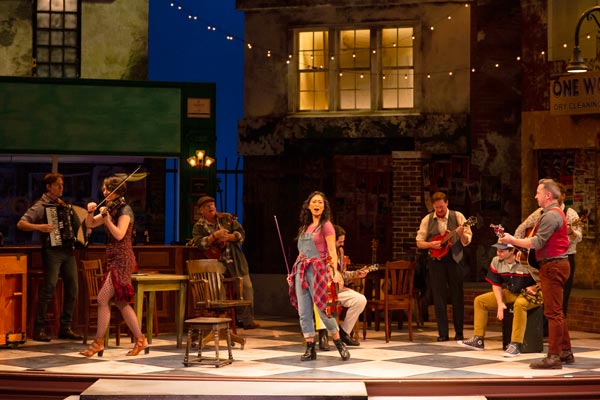 What is missing in Once are two things. The first is the music. There are lots of bouncy Irish tunes but none that you can remember once (no pun intended) you walk out of the theater doors. Movie critics have gone on and m about the music, but I found it sometimes very flat and sometimes very crazy, but not memorable The writers of My Fair Lady can rest easy.

The plays second problem is the story.

The boy-meets-girl on the streets of Dublin is at first terribly romantic, but it gets tired. Why don’t they fly into each other’s arms? Why doesn’t her friend in the bar, singing and dancing away, help her get her man? Why doesn’t he, hurt so badly by his former lover, wants to establish his new romance with a lot more vigor than he does? It is just not enough for a man to tell a woman the songs he is singing are not for posterity, but for her? He needs more than that. She also needs to wake up and smell the Irish coffee. She needs to tell him things, in an emotional way, about how she feels. 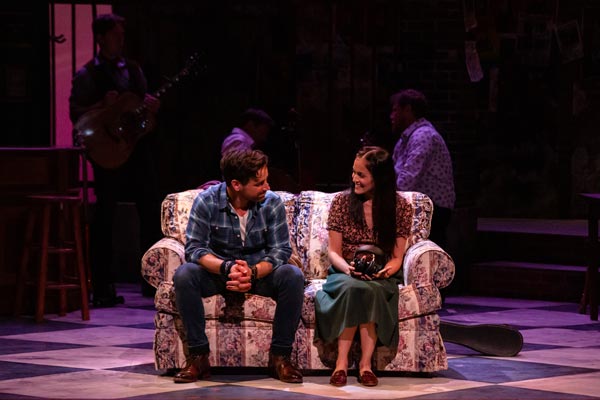 All of these things kept me from throwing my arms around Once, written by Enda Walsh with music by  Glen Hansard and  Marketa Irglova, all based on the movie written and directed by John Carney.

This is not a classic “pan” review of the musical. I did like a lot of it. There is a charm to the Dublin Pub and the characters who hang out there and from time to time burst into songs and dance. The romance itself, as complicated as it is, is enjoyable and pretty inspirational to watch. The playwright makes you think all will by rosy at the end, with a bit of energetic music, but there are many impediments to that finish. The actors on the show, particularly the stars,  David Toole as Guy and  Andrea Goss as Girl, are quite good, in fact very good. Everybody in the bar, whether banging the sides of boxes or slinking across the bar, or just huddled in bar corners chatting, are all good. The entire idea of an accidental meeting between a man and a woman, both in the rebound in Ireland, is solid and interesting. The set by Josafath Reynoso, was gorgeous. 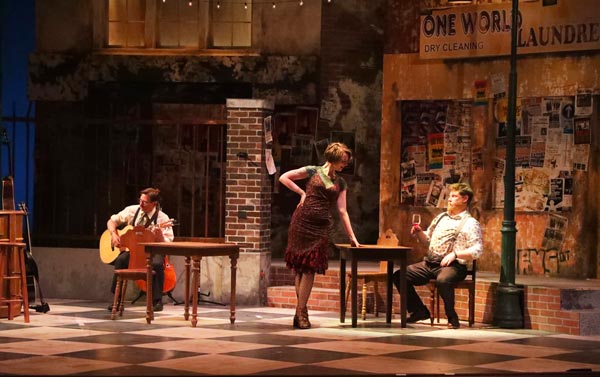 For me, though, this Once was enough.

Once is playing at The Colonial Theatre (111 South Street, Pittsfield, MA)  now through July 16.  Tickets are available for purchase online.