Remember high school? You had to read William Shakespeare’s MacBeth and F. Scott Fitzgerald’s The Great Gatsby. MacBeth was about the pursuit of power and fortunes in Great Britain and the 1925 novel Gatsby was about power and fortune in America’s Roaring Twenties.

It seems that everybody has read Gatsby. It has been made into six movies over the years. The book has had numerous printings.

I have seen it as a movie several times, most notably the 1970s version with Robert Redford as whiz kid Gatsby and the most recent one with Leonard DiCaprio as Gatsby. There was a play, a really dreadful one, at the Public Theater in New York some 10 years go in which actors just stood around and read the entire book. I went to see it.  Ughh!!

Now, Fitzgerald’s The Great Gatsby is back again, this time as another play, at the Princeton Summer Theater in Princeton where, ironically, Fitzgerald went to college. It opened last weekend, when I saw it, and continues until next Sunday.

In this staging, playwright Simon Levy adapted both the novel and movie into a two plus hour play. It is directed by Ethan Curtis Boll.

I met Boll by accident after the show and had a most pleasant chat with him. He said the hardest part of his job was helping Levy build emotion and drama into the characters, leaving the well-known story alone.

That is the whole problem with making a film or play out of any novel, in this case a great novel. You can make a long, extravagant movie because you have plenty of time to build drama in the stars of the show. On the stage, in two or three acts, that is a much harder task. Gatsby, in most plays and books, is the promise of a great story, not the great Fitzgerald story itself. You get the framework of the tale and the main characters are slipped into the story, but that is not enough. These Gatsbys don’t realize their potential. 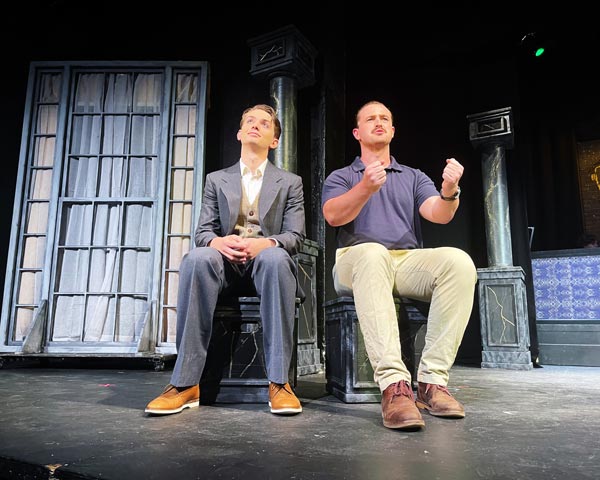 You do see it in films. You see Jay Gatsby’ fabulous mansion, his expensive Duesenberg cars and wild parties. The stage does not permit you the room for all of that and the story suffers because of it.

Levy’s play does, too, and so does the structure of it. In the book, you know early on that Gatsby, from the mid-west loved Daisy Buchanan, a girl in his home town. He goes off to World War I and she becomes an alcoholic. He yearns for her, is obsessed with her, for five years until they meet again on Long Island. They have both changed but they don’t know it. In Daisy, Gatsby sees all of the joy and happiness in the world and makes up his mind to do whatever he must to achieve it. To get her back, he realizes the American Dream of becoming rich and successful. Getting her again is difficult, though.

Daisy is happily (?) married to a physically big, brooding former college football star with a lot of money, Tom Buchanan. He knows nothing of her love for Gatsby, five years earlier, or at the time of the story. Daisy knew that Gatsby went off to war but did not know what a war hero he was or how he suddenly became rich. 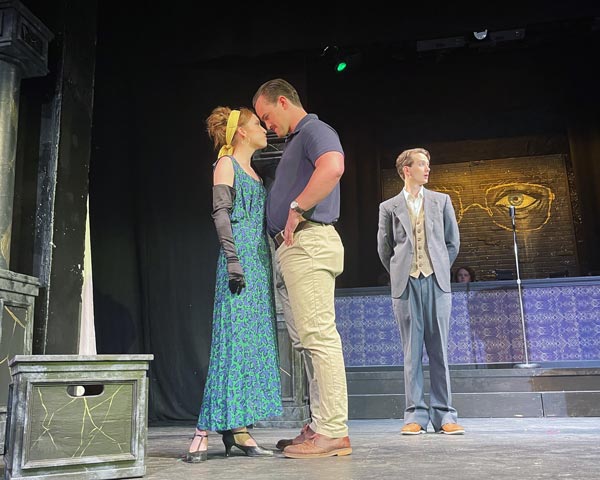 Their stories are revealed, but playwright Levy does not tell you them until very near the end of the play, not at the beginning, as Fitzgerald did in his book. So, for more than 90 minutes you sit in the audience and wonder who these people really are.

Jay Gatsby is played by an African American actor, Xavier Jefferson, but his race has no part in the story (it might have, since there were many African American gangsters in New York in the 1920s}.

The greatest failing in the play (the play itself is nicely stage) that little is done with the mysterious Jay Gatsby. All were dazzled by his personality, but he was a gangster. He worked with major gangsters of the day, including his friend, who fixed the 1919 baseball World Series, and men involved in Wall Street stock fraud, yet little is made of that. Being a gangster is how he got rich and that should be played up more. It is said in the book that he was reasonably good looking and had a wonderful smile, that his smile was in fact, “gorgeous” and made his presence anywhere just about irresistible. That should be played up more on the stage. Fitzgerald’s Gatsby was a fabulous, almost mythical character, and yet you don’t get that in the play. Things are missed. At the end of the play, when the phone rings endlessly, Fitzgerald, in his novel, explains that it is people calling to find out when the next big party is. Other parts of the novel are missed, or shortened, too. The play does not get into Fitzgerald’s scathing view of the partygoers other than to say they were “careless” people who made messes of many lives.

Right on target, though, is Levy’s portrayal of the beautiful, blonde Daisy as a heartless, vapid woman who drifts from party to party, drink to drink and and bank to bank with no moral compass. In the play, for no reason, she often bursts into song. Daisy is well played by Allison Spann, who has to work with a tough fictional character. Her husband Tom, played well by Robby Keown is seen as a brute, which he was, and his woman friend Jordan Baker, played nicely by Megan Pan, is a person who cheats at golf (and therefore cheats in life?). Nick Carraway, Daisy’s longtime friend, who tells the story, is played wonderfully by Jay White. He tells the tale but never gets in the way of it and lets all the mysteries go their own way. 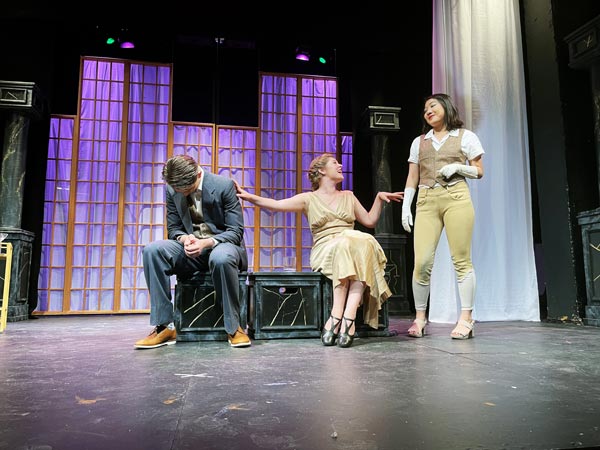 If you had not read the book or seen any of the movies, and do not know the story, you will not really enjoy The Great Gatsby. If you are familiar with the story, you might enjoy it.

After all, don’t we all still love someone we met and loved long ago? Whatever happened to her/him? Are they still beautiful? Fascinating? Would they still love me? Would they be the same as they were back then or changed completely?

It would be nice to find them again, wouldn’t it?

Then again, that only happens in books and movies. Real life is very, very different

So, was the great Gatsby really so great?

Well, he was in fiction.

The Great Gatsby has performances from June 30-July 3.  Tickets are available for purchase online. Performances take place in the Hamilton Murray Theater, located on the campus of Princeton University.

PHOTOS ARE FROM A DRESS REHEARSAL OF THE PLAY