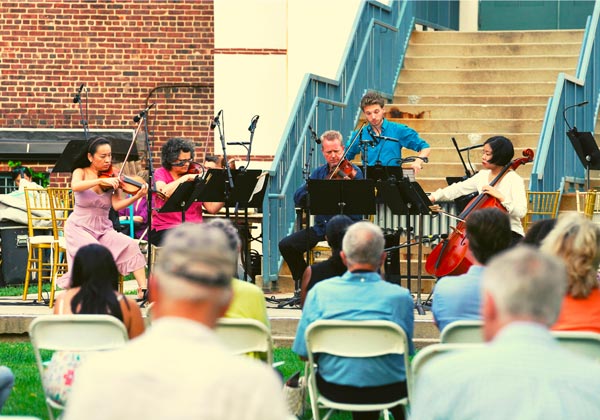 Tickets must be purchased in advance from the NMOA and NJ Symphony websites. Ticket sales will not be available on-site.

Food and drinks will be available for purchase, courtesy of Sterling Affairs and Urban Vegan Kitchen.

The Newark Museum of Art is located at 49 Washington Street in Newark, New Jersey.

June 25 @ 10:00am - Broadway in the Bricks Jr: Disney Day.  Broadway in the Bricks Jr. is a kid-friendly series that introduces families to the magic of Broadway. Local performers will sing, dance, and celebrate songs from the wonderful world of Disney. The show will feature scenes and songs inspired by musicals like Frozen, The Little Mermaid, The Lion King, Beauty and the Beast, Aladdin and more. Sing along and meet your favorite Disney characters! Come dressed up in costume for a chance to win a special prize. Performers: Xavier McKnight, Indigo B. Jackson, Isaiah Rosales, and Shannen M. Doyle. This program is organized by NMOA Visiting Curator of Performing Arts Daryl Stewart, a Newark-based theatre artist.

July 13 @ 7:00pm - Winds in the Garden. Wind music has entertained audiences for centuries. In Imperial Vienna, guests at most festive outdoor gatherings expected to be serenaded by groups of wind players, a tradition that gave us magnificent wind chamber music. The evening includes a Mozart masterpiece and music of Hummel and Gounod, but also wind music of the 20th and 21st century chosen especially for the garden courtyard of the Newark Museum of Art.  Hummel Allegro con spirito from Octet Partita in E-flat Major; Mozart Serenade No. 12 for Winds in C Minor; Amanda Harberg Hall of Ghosts; Schultz Divertimento for Wind Octet; Stacy Garrop Bohemian Café; Gounod Petite Symphonie. Programs and artists are subject to change

July 27 @ 7:00pm - Moving, Believing, and Being Together.  New Jersey Symphony Resident Artistic Catalyst Daniel Bernard Roumain (DBR) returns to the Newark Museum of Art with the New Jersey Symphony Chamber Players for a program that presents music through the lens of an emotional arc that meets the moment. DBR has curated a mix of works from amazing composers like Florence Price, Mozart, Farrenc and Barber and presents his own powerful works such as Hip-Hop Study & Etude in F Major and his arrangement of “Lift Every Voice and Sing.” The Chamber Players will perform the Ukrainian national anthem in solidarity with the Ukraine people during the unjust war that continues. Verbytsky “State Anthem of Ukraine”; Johnson/arr. Daniel Bernard Roumain “Lift Every Voice and Sing”; Farrenc Selections from Nonet in E-flat Major; Mozart Overture to The Marriage of Figaro; Terry Riley In C; Aleksandra Vrebalov Echolocations; Price Adoration; Daniel Bernard Roumain Hip-Hop Study & Etude in F Major. Programs and artists are subject to change.

July 29 @ 7:00pm - A Night of Jazz and Soul with Antoinette Montague. Hear Newark Native Antoinette Montague perform music from The Great American Songbook with Danny Mixon on piano, Melissa Slocum on bass, Bobby Sanabria on drums, and AC Lincoln on tap dance. A Night of Jazz and Soul is organized by Sheila Anderson, WBGO host and jazz event curator.

August 6 @ 7:00pm - Simply Simone: The Music of Nina Simone. Prodigy. Superstar. Activist. Exile. One of the true divas of the 20th century, vocal powerhouse Nina Simone defied classification and defined a generation. This electric musical lays bare the rich legacy of an American icon whose work spans different genres, from jazz to gospel to blues to Broadway to rock and roll. It features such definitive classics as I Loves You Porgy, Young, Gifted and Black, and My Baby Just Cares for Me. Heart-melting and hopeful, Simone’s spellbinding story comes to life through four actresses in this theatrical journey. Simply Simone is performed in two acts with one 15-minute intermission. The total run time is approximately two hours and 10 minutes. Performers: K. Desiree, Joy Brown, Kia Stewart, Rhyan McNeil; Associate Director: Kim Awon; Movement Director: Nikia Neal. This program is organized by NMOA Visiting Curator of Performing Arts, Daryl Stewart, a Newark-based theatre artist.