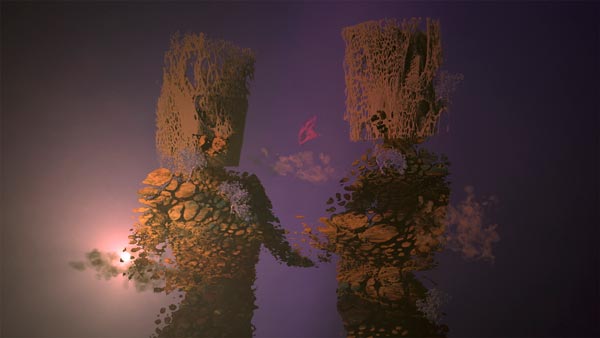 Unforgotten is a deeply effectual animated short by Sujin Kim telling stories of the harrowing plights of comfort women enslaved by the Imperial Japanese Army during World War II. The film uses other-worldly imagery and symbolism as various tales of being a comfort woman are told. The stories are devastating, detailing the harsh truths of being stolen and exploited. The animation is beautifully executed, simultaneously being impressive and impactfully haunting. Unforgotten is a wonderfully put-together, impactful collage that poignantly conveys the nightmare of being a comfort woman.

The film’s shifting of landscapes as the different stories are being told capture the magnitude and pain of each devastating account. Oftentimes, the comfort women were tricked into being enslaved with ploys such as offering caramel to a young girl, or by promising young women housing for taking a job making uniforms. The beautiful oasis we first see with women peacefully existing is disturbed by a large ominous chained figure in the distance, plotting on the women below. We are then shown red boxes struggling to stay afloat in the water, only to sink and be taken captive by a haunting stone humanoid figure, which represents the malicious captors. The sheer petiteness of the boxes in comparison to the scale of the faceless humanoid figure conveys the magnitude of power the owners of the brothels had over these young women and girls.

Threatened with being killed after disobeying, the girls are kept in rooms where they were sexually exploited. As another grandma describes when she realized she was trapped in a brothel, the red walls of the rooms shown would disperse into more small red boxes. The imagery continues to harmonize with the story in an unconventional and poetic way. The illusion of safety in these rooms erupts with this devastating reality. She then details how women would resort to taking their own lives, and a red cape falls from one of the rooms and descends into the now vacant ethereal oasis. The image of the fallen cape is incredibly affecting and lingering.

Other striking pieces of imagery were the broken hollow statues of women and the remains of female stone giants under a dim sky, signifying the impact of the horrendous abuse the women experienced. Through both images, the gravity of the disintegration of the comfort women is deeply felt and understood. The last grandma narrating expresses how now that so much time has passed, she finally has the freedom to expose what happened to her. All of these stories are told in an effort to prevent the sexual exploitation of women in wartime for good. Unforgotten is incredibly hard-hitting and innovatively recounts the stories that will prevent the suffering of women during war time in the future.

Unforgotten will be screening as part of  New Jersey International Film Festival  Shorts Program #1 on Saturday, June 4, 2022 – Online for 24 Hours and In Person at 5PM! For more info on this screening go here.

The 27th annual New Jersey International Film Festival will be taking place on select Fridays, Saturdays, and Sundays between June 3 -12. The Festival will be a hybrid one as we will be presenting it online as well as doing select in person screenings at Rutgers University. All the films will be available virtually via Video on Demand for 24 hours on their show date. Each ticket or Festival Pass purchased is good for both the virtual and the in person screenings. The in person screenings will be held in Voorhees Hall #105/Rutgers University, 71 Hamilton Street, New Brunswick, NJ beginning at either 5PM or 7PM on their show date.  Tickets: $15=Per Program; Festival All Access Pass=$100.