Now, Jodi’s life, and the lives of her parents, are on stage in American Jade, a new play, written by Long, in which she also  stars. This play is upbeat, but it also shows the dark sides of show business as seen by Asian Americans. Life was not as easy for them as it was for whites, on or off stage. At times it was exhilarating, yes, but at times it was grueling.

The play is at the Bucks County Playhouse, in New Hope, Pennsylvania, its first play of the summer season, through June 11. It’s a one woman show in which she works hard to explain how her parent’s careers helped to make hers and how their lives were, and are, a reflection on Asian American life over 60 some years – some happy and some sad.

Long has become one of America’s top actors, all culminating in her 2021 Emmy for Mrs. Basil E. in Dash and Lily on Netflix.

American Jade, the play, is about the lives of her family, as she saw them. She began writing it as a series of vignettes and stories when she starred in Flower Drum Song some twenty years ago and kept at it, filling, and tumbling out of, the drawers of her office desk. In 2004 a friend who knew of the project decided to make a documentary out of the stories. The documentary, Long Story Short, which Long helped write and co-produced. It played in numerous theaters and film festivals and won Best Documentary and the Audience Award at the Los Angeles Asian Pacific Film Festival.

She went back to her original stories and wrote American Jade. The documentary was mainly the story of her parents in show business, but the play is more about Jodi’s life in the industry – both the glamour and the troubles.

She thinks that the play will please people. “We all have ‘imprints’ in our lives- family, friends, neighborhoods, and they influence us all,” she said. “This play is the story of those ‘imprints.” 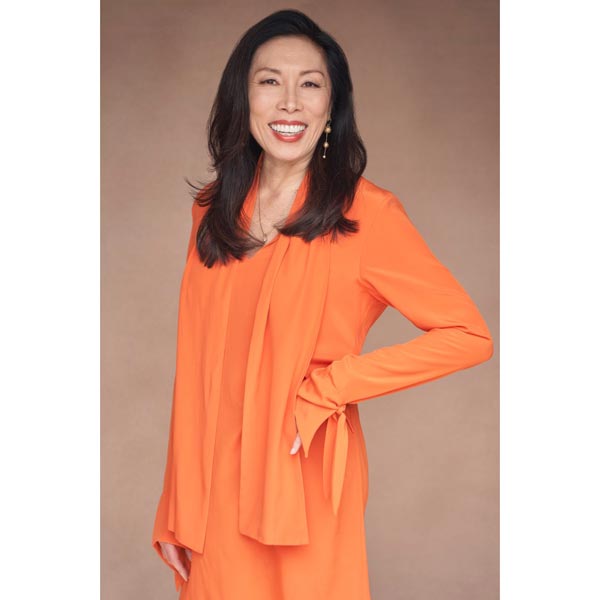 There is humor in the play, but a lot of talk about unfounded hate for Asians, too. Asians in the U.S. have always faced persecution, back to the Chinese in the 1840s and 1850s. Over the last year, hate crimes against Asian American have increased, alarmingly, by nearly 100%. Several Asian massage parlor workers in Atlanta were murdered last year. Tens of thousands of Asian Americans have protested and marched in the streets over the last few years to fight racism against them.

“Hey, my mom was put in a Japanese interment camp for over two years in Idaho just because she was Japanese in World War II. There were no internment camps for German-Americans, were there?” said Ms. Long “My family, all Asian Americans, have had difficult lives.”

She takes a long and deep breath, “Look, my parents had it tough. I had it tough, but we all had it tough. We’re all people, all Americans and we need to do more to help each other.”

That can be a challenge. She told me a harrowing story about the pandemic.

“In numerous polls, Americans said the COVID was Asian because it reportedly came from Wuhan, China. It has been seen as the major reason there is hatred against Asian-Americans. I got so scared of retribution by Americans against Asians that whenever I went out in public during the Pandemic I wore sunglasses and my hair up, a cap on my head and I avoided crowds. What did I, any Asian, do to advance the pandemic? Nothing. Discrimination against us is not right.”

Jodi Long is no stranger to show business. She made her debut on Broadway at age seven in Nowhere to Go but Up and continued to take on roles as a child, teen and adult.  She was in numerous Broadway shows, including Flower Drum Song and Getting Away with Murder She also appeared in numerous Off-Broadway productions over the years and starred in several films.

In addition to Dash and Lily, she has appeared on television in Sex and the City, as Okocha in TBS’s Sullivan and Son, AMC’s Falling Water, Margaret Cho’s mom in All American Girls, in Café Americain with Valerie Bertinelli and Miss Match with Alicia Silverstone.

“I’ve been a fan of Jodi Long since I first saw her on Broadway with Patricia Richardson and Kevin Kline in ‘Loose Ends’ in 1979. Jodi has a compelling story to tell that feels more pertinent today than ever before. We’re delighted to welcome the multi-talented director Eric Rosen to the Playhouse I am most grateful to Patricia Richardson for introducing us to this funny, insightful play,” said the Bucks County Playhouse’s Producing Director Alexander Fraser in a statement.

His partner, Robyn Goodman, thinks that play also hits family heritage and will appeal to everyone. “Jodi’s story is universal and anyone who has a family will identify with her search for understanding through ancestry,” she said.

The irony of Ms. Long’s career is that when she was studying acting at college, her professor told her that because she was Asian American she could not get work in show business. He told her to pursue modeling.

“I was just shocked that he said that to me,” she said. “I think remembrance of him made me work harder.”

She could not make it in show business? Boy, was he wrong.