Hailing from Kingston, Jamaica and currently based in Montclair, NJ, architect Nina Cooke John’s work includes a range of ventures - from remodeling homes and businesses, to designing interior and public sculptures, and teaching classes and community workshops.

Mayor Ras Baraka and the City of Newark have commissioned Cooke John to design and build a monument in the newly renamed Tubman Square (former Washington Park) which will honor the legacy of Harriet Tubman and the city's long fight for justice and liberation. Slated for installation in the Fall of 2022, the monument is set to replace a now-removed statue of Christopher Columbus and is a component of a larger revitalization of the park. 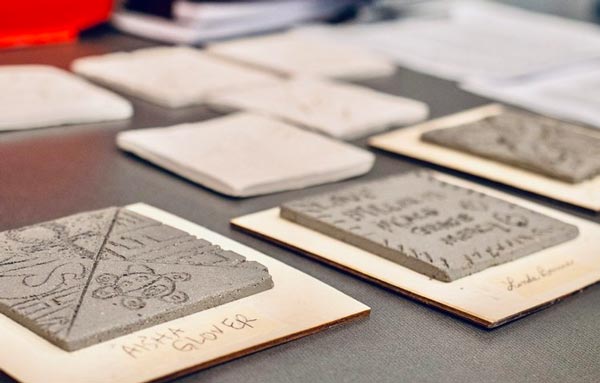 As a part of the development of the monument, children and community members are invited to participate in workshops to make mosaic tiles around the theme of “liberation.” The tiles will be fired, glazed, and incorporated into the monument’s ground and wall surfaces.

Concurrently, Audible is sponsoring an oral history project where stories of Newark residents can record their stories of liberation. The audio recordings will become a part of the listening experience for everyone visiting the monument.

We recently spoke with Cook John to learn more about the community engagement aspect of this project.

What brought you to NJ?

I am from Kingston, Jamaica and my parents are still there. I essentially was in Jamaica through high school and came here for college. I have lots of relatives here, including my grandmother and cousins, so every summer I used to come and spend my time between East Orange and Brooklyn and the Bronx.

Were you designing or making art at that time?

No. I stopped taking art classes in middle school when I was around 13. I was on a pre-med track, so I was mostly focused on sciences. There, when you go into a track, you are fully focused on that one track - you can't even do electives. Outside of school, I felt like I had only a few options available to me. It wasn't until my last year of high school that I decided to take art classes at Jamaica School of Art. In the evening after school, I took painting and ceramics classes.

When did you start considering architecture and design as a profession?

I made that decision in my last year of high school. I realized that being a doctor is not what I wanted to do, even though I'd been intensely studying math, physics, and chemistry. I don’t remember ever meeting an architect, but I really wanted to take art classes.

When I first came to the states, I started at City College. City College has a good program and didn't require a portfolio. One of my professors encouraged me to transfer, so I ended up finishing up my degree at Cornell.

How did your family react when you decided to study art instead of medicine?

They're always supportive. I don't remember getting any pushback at all.

Are there other artists in your family?

My mother is one of nine, and at least three of her siblings draw and paint. One of them has been working as an artist for a long time. Two others paint and produce art regularly, but don't necessarily identify as artists and have other professions. My younger brother is an architect as well.

Wow! So, creativity runs in the family. Do your children enjoy making art?

Yes. I have three daughters. The youngest one spends her free time drawing. I'm encouraging her to take a summer intensive drawing class in town, but she doesn’t want to. She says, “I just want to draw on my own.” I feel bad because in her middle school, the art teacher can be strict, so she doesn't want to take a summer class. I'm still trying to convince her. I hope she does go.

As an artist, architect, and educator, you have a broad range of projects. Do you have one central theme or philosophy that ties your work together?

I've been thinking about that a lot recently as my practice expands to include more public art and cultural institutions. An overarching theme in my work is belonging and the idea of being at home, whether in public or private spaces. Ultimately, in public spaces, belonging means that we either see ourselves reflected somehow, or we're giving the opportunity to connect with community and neighbors in a way that we understand. There is political power when we feel like we belong, because in community we take ownership and then we act.

Each project should be really site specific and grounded in the physical, social, cultural issues of a place. Whether it's on the scale of families and individuals, or larger scale cultural institutions, in the private realm or semiprivate, it’s important to understand how people are going to use a space with such specificity that things just feel right. Our ego must be put aside to listen and observe the way that people use their spaces. We must respond to the hopes and dreams of people.

How would you say that that translates in the design of the Harriet Tubman Monument in Newark?

I envision the monument as a gathering space. Neighbors, whether they are people you know or not, or even just sit alongside people where they interact or not. I think you're connecting to people. I think when we sit in a park, even if we're on a park bench across from someone, there's the act of being in the public space with other people is really powerful.

In the tile making workshops, people are given the opportunity to physically create a part of the monument, (which) I think is one more step in that idea of ownership where they really should feel like it belongs to them. Right? The space belongs to them. They can hang out with their friends. They can be loud if they want to. They can do whatever they want, but also by having one physical thing that they can point to and say “I worked on that.” Personal ownership can lead to community ownership of the place, but also see how one small piece can feed into the collective.

What does this project mean to you?

This monument will be one of my first permanent outdoor structures that serves as a cultural space in the public realm, so it means a lot to me and it is a really ambitious project for both me and the city of Newark. We are now materializing some of the ideas that up until now have been on paper, and it's an exercise in craftsmanship. Audible and other entities around the park are also vested in the park as a placemaking initiative as well. Beyond the monument itself, there is larger revitalization of the park.

Children and families are invited to the upcoming public tile making workshops:

* Saturday, May 21, from 12 to 5 pm. Community Day: Hip Hop Hooray will use the four major pillars of Hip Hop — MCing, DJing, break dancing, and graffiti art — to underscore the significant role that Newark holds in the legacy and future of the culture, there will be musical performances, art-making activities, dance presentations, and tile-making workshops throughout the day.

Thursday, May 26 from 6 to 8 pm: to contribute to the making of the monument, there will be a hands-on tile making and audio recording workshop