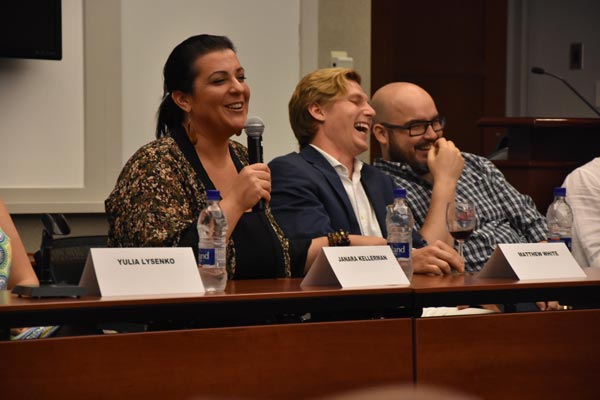 (PRINCETON, NJ) -- Princeton Symphony Orchestra’s Princeton Festival Guild presents its annual Artists’ Round Table on Thursday, June 2 at 7:00pm at the Princeton Public Library’s Community Room. The Guild invites anyone curious about what goes into putting on an opera to this round table discussion centered on Benjamin Britten’s only comic opera, Albert Herring. Moderated by Guild member and Princeton Symphony Orchestra Trustee Marcia Bossart, panelists will discuss the upcoming production of Britten's opera, preparing for a role, and the joys and challenges of being in the opera business.

Benjamin Britten’s comic opera Albert Herring is a humorous coming of age tale punctuated by the title character’s overly involved mother, precursor of today’s helicopter parent. Albert Herring is encouraged to wear the May crown when no virtuous maidens are to be found. Add in some celebratory spiked lemonade, and mayhem ensues.

Edward T. Cone Music Director Rossen Milanov has established himself as a conductor with considerable national and international presence. In addition to leading the Princeton Symphony Orchestra and the Princeton Festival, Mr. Milanov is the music director of the Columbus Symphony Orchestra, Chautauqua Symphony Orchestra, and chief conductor of the RTV Slovenia Symphony Orchestra in Ljubljana. Noted for his versatility, he is a welcomed presence in the worlds of opera and ballet. He has collaborated with Komische Oper Berlin (Shostakovich’s Lady Macbeth of Mtzensk), Opera Oviedo with the Spanish premiere of Tchaikovsky’s Mazzepa and Bartok’s Bluebeard’s Castle (awarded best Spanish production for 2015), and Opera Columbus (Verdi’s La Traviata). He has been seen at New York City Ballet and collaborated with some of the best-known choreographers of our time such as Mats Ek, Benjamin Millepied, and most recently Alexei Ratmansky in the critically acclaimed revival of Swan Lake in Zurich with Zurich Ballet and in Paris with La Scala Ballet.

Festival Director Gregory J. Geehern, D.Mus., is a multi-talented conductor, pianist, baritone, and scholar who has been called a "gifted new presence" for his work with full choirs, opera choruses, and chamber ensembles in repertoire from the Middle Ages to the present day. He is a recent addition to the Princeton Symphony Orchestra’s administrative staff, having served as acting artistic director of the Princeton Festival in 2021 following the departure of Richard Tang Yuk. Prior to that, he held the position of assistant to the artistic director for several years and served as assistant conductor and chorus master of Beethoven's Fidelio, Benjamin Britten's Peter Grimes, and John Adams' Nixon in China. He also conducted performances of masterworks such as J.S. Bach's cantata Der Herr denket an uns and George Frideric Handel's Dixit Dominus with The Princeton Festival's Baroque Chorus and Orchestra.

The Princeton Festival Guild is dedicated to introducing young and old alike to the joy and inspiration of great performances. The Guild supports the Festival’s many educational and community engagement programs designed to excite, inform, inspire, and invite discovery and engagement. Guild members play a critical role in the overall success of the Festival by supporting Festival events, organizing fund raisers, and providing hospitality.

The June 2 Artists’ Round Table is free and open to the public.

Health and Safety: The Princeton Symphony Orchestra is closely monitoring and adhering to the New Jersey Department of Health’s COVID-19 Requirements. Princeton Festival COVID policies are available on the PSO website at princetonsymphony.org/visit/health-safety.

Founded in 2004, The Princeton Festival has established a strong profile as a multi-faceted, summer performing arts festival attracting people from throughout the Mid-Atlantic region and beyond. The Festival has a reputation for artistic excellence, for growing the number and variety of its offerings, and for serving an audience of up to 8,000. The Festival promotes life-long learning in the arts, from children to seniors, through performance opportunities for children and young people in the piano competition and opportunities for young emerging professionals to perform principal and supporting roles. The Festival has long-standing partnerships with public libraries and local churches to offer its series of free educational lectures to a wide and diversified community.