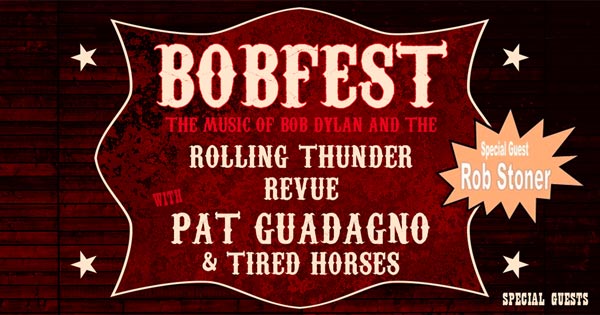 In 1975 Bob Dylan painted his face and drove a busload of musicians across North America on a 57-show tour they called the Rolling Thunder Revue. The circus-like expedition, recently documented by filmmaker Martin Scorsese, produced some of the most joyous music and critically acclaimed performances of Dylan’s career.

This year BobFest welcomes Rob Stoner, to the May 26th celebration. In addition to his work with Dylan, Stoner's recording credits include Don McLean’s American Pie. Rob joins Pat Guadagno, Rob Paparozzi, Steve Delopolous and All-Star Band to deliver the music of the Rolling Thunder Revue with passion and reverence befitting a Nobel Prize Winner.

In addition, there will be Pre-Show cocktails on the patio with music by one of New Jersey’s finest roots-rock songwriters, Anthony Walker. Doors open at 6:30pm.

Tickets range from $20-$45 and are available for purchase online. Count Basie Center for the Arts is located at 99 Monmouth Street in Red Bank, New Jersey.

The annual Tom Moog Production has been called "New Jersey’s hippest musical event" and with guest emcee “Big” Joe Henry of NJ101.5. you can expect a few surprises.