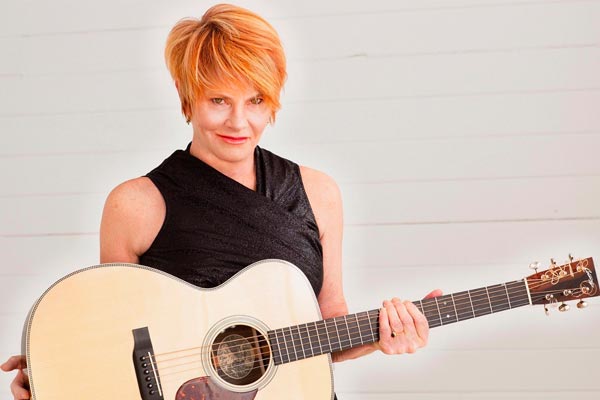 It’s a great night for live music in New Jersey this Saturday, April 30, 2022 evening at Toms River’s Grunin Center for the Arts. Tonight’s concert is a long-awaited performance by singer/songwriter Shawn Colvin, currently appearing on her Steady On 32nd Anniversary Tour.

Shawn Colvin was born in Vermillion, SD and started playing guitar in Carbondale, IL at the age of 10. She made her first public performance at the University of Illinois at age 15. After working as a member of a Western swing band in Austin, TX — the city she now calls home — she moved to New York City where she recorded her 1989 debut album, Steady On. The album earned her a Grammy for Best Contemporary Folk Recording and helped her to amass a loyal fanbase.

In 1996, Colvin released her breakthrough album, A Few Small Repairs, which contained the Top 10 hit, “Sunny Came Home,” and earned her two highly-coveted Grammy Awards — one for Record of the Year and one for Song of the Year. She published her autobiography, Diamond in the Rough, in 2012, and, in 2019, recorded an all-acoustic version of her debut album, Steady On, to commemorate the 30th anniversary of its initial release.

Inside the Grunin Center auditorium, Colvin’s opening act, singer/songwriter Clarence Bucaro, takes the stage. Looking somewhat reminiscent of a young James Taylor, he greets the audience, asking, “How are you guys doing?” Launching into his original composition, “Tragedy,” Bucaro’s clear tone fills the auditorium as he strums his guitar singing, “In your tragedy/That’s where you want me to be” on this gentle folk song.

Highlights of Bucaro’s set include “Let Her Fall,” a lullaby about the challenges of addiction, where repetitive fingerpicking underlies a legato vocal line. Other highlights include “Old Friend,” where Bucaro sweetly croons, “Nobody knows you like an old friend,” and “Watching You Grow,” a song in which he recalls the joy of experiencing the development of his child.

Following the inspirational “Love Like the Last Chance,” Bucaro publicly thanks the audience and Shawn Colvin for his appearance tonight. He concludes with “Where Do I Go?” a moving composition where he sings, “I know I only talk to you when I’m down/Could you help me turn this thing around?/Give me a sign and make it clear/ I gotta know/Where do we go from here?” The crowd whistles and cheers for Bucaro’s heartfelt performance.

Following a short intermission, Shawn Colvin takes the stage sporting a stylish haircut with long side bangs and wearing a dress with a ruffled bodice and skirt along with knee-high boots. After inquiring, “How are you? Are you ready?” Colvin tunes her acoustic guitar and opens with a poignant cover version of The Bee Gees’ “Words.” Her rich alto serenading the audience as she sings, “It’s only words and words are all I have/To take your heart away,” she gently thumps on her guitar while strumming to add a full-bodied beat to the arrangement.

Colvin refers to the pandemic’s two-year delay of her performance here at the Grunin Center when she explains, “This show was to be a celebration of the 30th Anniversary of Steady On, but there was a ‘little hiccup,’ so now it’s the 32nd Anniversary,” before announcing, “I’m going to play the whole record from top to bottom.”

Launching into the album’s opening number, “Steady On,” Colvin’s vocal inflection and vibrato punctuate her performance as she cries, “I’m gonna keep my head on straight/I just hope it’s not too late/Open up the gate/I go straight on/Steady on.” Her talent and artistry shine through while she strums and rhythmically thumps out the feel of the song’s funky groove on her guitar.

The crowd responds with avid applause and Colvin open-tunes her instrument for her next selection, “Diamond in the Rough.” With its twangy fingered guitar accompaniment, Colvin croons on the captivating chorus, “You’re shining/I can see you/You’re smiling/That’s enough/I’m holding on to you/Like a diamond in the rough” as the arrangement muscles forward like a freight train before ending to applause, hoots, and hollers.

Colvin talks to the audience about her songwriting process, revealing, “‘Diamond in the Rough’ was a launchpad for many songs that followed. I was a very reluctant songwriter. I wrote ‘Diamond’ just for guitar and then I took it and created the rest of the songs.” Adding,“The core of any singer/songwriter is the ‘miserable breakup song,’” Colvin jokes by acknowledging, “You love them and I do, too.”

Colvin’s full alto resonates on her breakup song, “Shotgun Down the Avalanche.” Chanting, “Sometimes you make me lose my will to live/And just become a beacon for your soul/But the past is stronger than my will to forgive/Forgive you or myself, well, I don’t know,” her poetry is accompanied by accomplished fingerpicking and deft guitar hammer-ons.

The crowd reacts with enthusiastic applause and Colvin jokes, “Let’s not stop there. This one is possibly more bleak than the last one.” Here, she performs the folk ballad, “Stranded.” Becoming one with her guitar as the music flows from her fingers and voice, Colvin presents a master class in the effective use of dynamics, pulling away from the mic as she sings and adding to the emotion of the song. She follows with “Another Long One,” the movement of the arrangement coming from the thumping and strumming of her guitar as she cries, “And it’s gonna be another long one tonight/It’s just me and my well-intentioned spite” on this rhythmic number.

“That was a pretty dismal song,” jokes Colvin, “but you’ll notice that it was perky in a major key.” Moving on to her next tune Colvin explains, “This is a song about friends. I’m blessed with people who ‘get’ me,” acknowledging, “Sometimes you gotta just hold somebody’s hand and cry.” Sliding up and down the neck of her guitar and tapping out the rhythm as she plays, Colvin performs the slow folk-rocker, “Cry Like an Angel,” on which she intones, “You can cry like angel/When there are no words.”

The crowd applauds and a woman in the audience shouts out, “I like your dress!” to which Colvin responds, “Thank you,” before gesturing a curtsy, ruffling her skirt, and peering out into the darkness of the audience to inquire, “You all OK out there?”

The audience replies with hearty applause and Colvin goes on to tune her guitar by ear, explaining, “I have an electronic tuner here, but I don’t like to use it. When you have a band, you want to be in tune with everyone, but in the absence of a band, it’s just you and me — no fourth wall — and if I’m engaging with the tuner, I’m cheating on you and it feels wrong.”

Colvin provides background to her next composition, revealing, “I was living in the East Bay Area and I got a job in a stained glass store.” Continuing, “I lived in an attic room which had a skylight that could open, and I would sit on the roof and look across the bay to San Francisco with a six-pack of beer,” Colvin explains, “There, I wrote the verse of this song, but when I got to New York, I came back to it, so it starts in the Bay Area and ends in New York City.”

Expertly fingerpicking the accompaniment, Colvin skillfully twangs single high notes on her guitar to perfectly punctuate “Ricochet in Time,” a number on which she sings, “Ricochet in time to the music/Just pick a day and I’m in/A new destination.”

The crowd reacts with avid applause and Colvin acknowledges, “This last song is a great album closer, but not a good concert closer, so I’ll do another song after it.” After an audience member calls out, “Thank you, Shawn, for all the years of great music,” Colvin graciously replies, “I am grateful forever.”

Talking about her time spent as a backup vocalist on a European tour with Suzanne Vega, Colvin confesses, “I had an affair — not the best idea in the world —and it left a hole in my heart. I returned to New York City deep in that nostalgic state and this song is what I came up with.”

Here, she performs her melancholy composition, “The Dead of the Night.” Engaging the audience with an emotional performance, Colvin sings, “Now all that burns is a candle/And the fog melts over the night/And it softens the edges/I begin to write/In the dead of the night,” to which the crowd responds with large applause, hoots, and hollers.

Colvin ends her set with “You’re Gonna Make Me Lonesome When You Go.” Deftly fingerpicking on the guitar, her crying vocal cuts through, making the audience feel as though she’s singing just to them on this apropos number which ends with the entire crowd standing on its feet and cheering.

“It was my pleasure performing for you,” says Colvin before taking leave of the stage. Audience members continue to stand and clap, wanting more from this seasoned performer who returns to take a seat at the grand piano for encores of “If I Were Brave,” a song from her breakthrough album A Few Small Repairs, along with a cover rendition of Tom Waits’ “Ol’ 55.”

Audience members continue to whistle and applaud, and Colvin quietly motions, “One more.” She takes a seat on a stool center stage and accompanies herself on guitar as she sings a cover version of Talking Heads’ “This Must Be the Place (Naive Melody).” Rhythmic strumming compliments her easy vocal, capturing the audience as she sings, “Say goodnight, say goodnight.” The crowd stands for another ovation and Colvin responds by exclaiming, “Thank you, everybody! Thank you for coming out,” before graciously motioning to the audience, bowing, and exiting the stage.

To learn more about Shawn Colvin, please go to shawncolvin.com. For further info on Clarence Bucaro, please click on clarencebucaro.com. For more information on upcoming performances at Toms River’s Grunin Center — including Amanda Anne Platt and The Honeycutters on May 27, NYC3 on June 3, and The Bronx Wanderers on June 26 — please go to grunincenter.org.