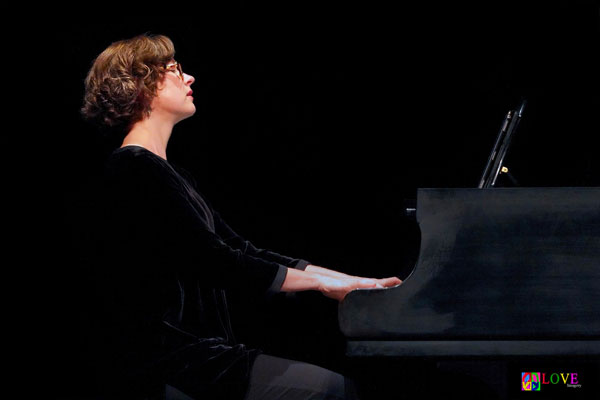 Music lovers are making their way inside Toms River, NJ’s Grunin Center for the Arts, located on the campus of Ocean County College, this April 15, 2022 afternoon for a Friday Afternoon Recital Series performance by musician Maria Yefimova.

Yefimova is an internationally-acclaimed concert pianist. A native of Russia, Maria graduated with honors from Moscow Tchaikovsky Conservatory. After receiving a scholarship, she moved to the United States to pursue her Master’s and Doctor of Musical Arts Degrees at NYC’s Manhattan School of Music.

As a concert artist, Yefimova has toured Italy, Spain, England, Slovakia, Croatia, and Russia, and has performed in the United States at such major venues as Carnegie Hall. She has been featured on the Bravo television network, as well as on major arts TV networks in Italy, Argentina, Brazil, Colombia, Venezuela, Mexico, and Chile.

Yefimova is also a featured artist in the film documentary, Women of Music, a classical music series that presents interviews and performances with top artists from around the world. 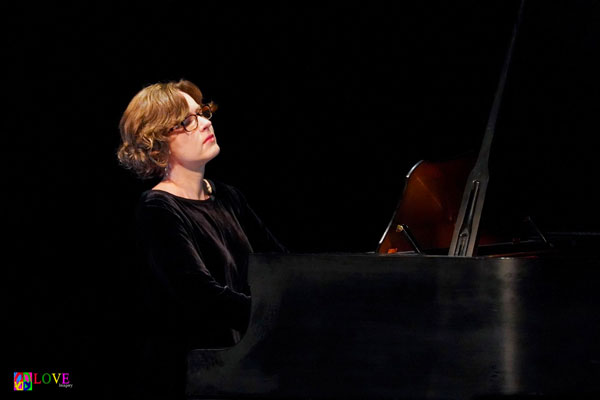 “Hello, everyone, and thank you for coming,” says Yefimova before beginning an informative talk about the subject of her program this afternoon, composer Alexander Scriabin.

Yefimova describes Scriabin as a turn-of-the-century Russian composer whose music evolved from tonality to atonality. In his “early period,” she says, Scriabin was influenced by Chopin, revealing that, as a youngster, Scriabin “even slept with a Chopin score under his pillow.” 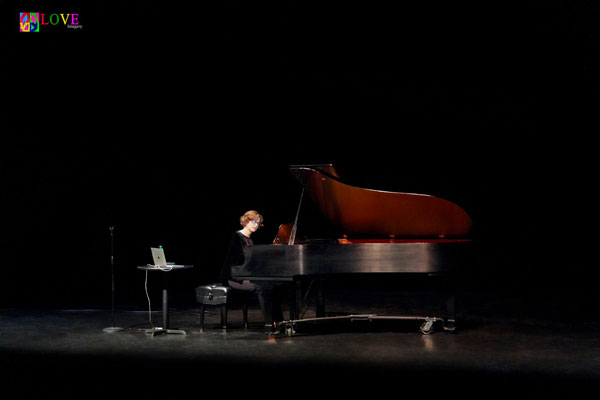 As she launches into this sad and rich composition, her fingers gently caress the keys of the piano and she plays with feeling. The pristine sound of the instrument sweetly wafts over the audience before the mood changes to one which is more melancholy. While she plays, Yefimova’s head gently moves in sync with the motion of her hands and the music. At the conclusion, when she lifts her fingers from the keyboard, the audience waits a moment, drinking in the experience before applauding.

Yefimova explains that after Scriabin’s mother died, he was raised by his aunt, an amateur pianist who became his first music teacher. As a child, Scriabin even built his own toy pianos, which he presented as gifts. He studied at Moscow Conservatory where he practiced several difficult pieces so often that he injured his right hand. As a result of the experience, he later composed pieces for the keyboard that required only the pianist’s left hand to play them.

Here, Yefimova performs Scriabin’s “Nocturne for Piano, left hand, Op. 9.” As she sits at the keyboard, her right hand remains motionless while her left hand spans the keyboard playing strong bass chords that move up to include higher notes. Dramatic bass lines are punctuated by treble passages which include intricate one-handed runs and trills. 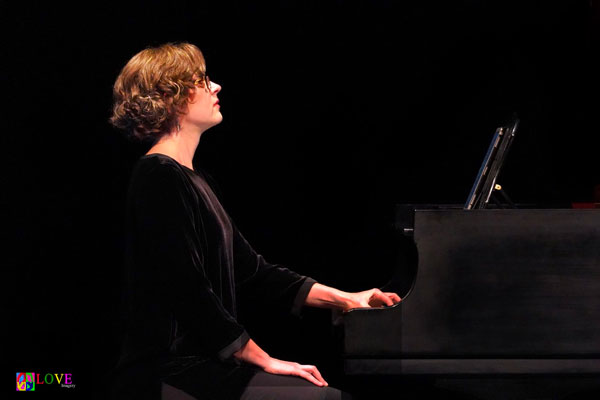 Her left hand walks — and then runs — over the keys, alternating playing with force and with a light and gentle touch, the agility and strength of her single hand impressing the crowd and inspiring avid applause.

Yefimova reveals that in 1894, Scriabin was introduced to a wealthy patron who agreed to publish his music and give him a monthly stipend. As a result, he was able to travel throughout Europe where he wrote a number of musical preludes which, as Yefimova explains, functioned like “postcards” of his trips.

After performing six of the composer’s “24 Preludes, Op. 11” — each a short piece with its own personality — Yefimova talks about how Scriabin married, had four children, and separated from his wife before finding the love of his life and entering his “middle period” of composition. It was during this period that he wanted his music to have a radiant, shining feeling to it and strove to express the sensation of light in music.

As Yefimova performs “Two Poèmes, Op. 32,” some dissonance can be heard, and there are lovely rubatos as the music ebbs and flows from the grand piano. 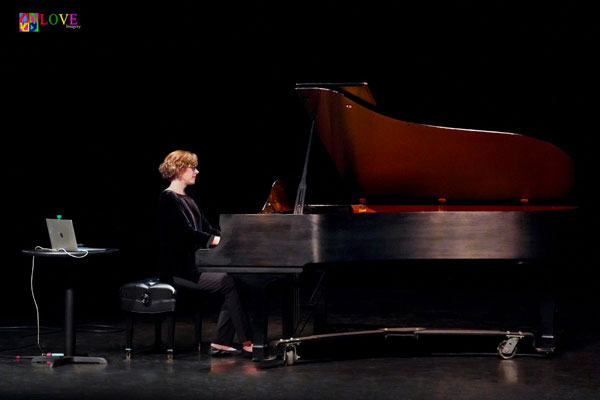 Whereas the first poem is light and lilting, the second is a forceful and rapid piece that contrasts nicely with the initial poem.

According to Yefimova, in 1907, Scriabin entered his “late period.” In this period, he often used a special chord he created which he called the “mystic,” or “Prometheus,” chord because of its use in his piece, “Prometheus: The Poem of Fire, Op. 60.” In this period, because he had synesthesia — a condition where a person sees colors upon hearing certain tones — Scriabin also wrote for the “color organ,” a mechanical device built to represent sound and accompany music in a visual medium. As Yefimova explains, this experience was “a kind of precursor to the modern rock concert.”

Yefimova performs two pieces from Scriabin’s late period, “‘Desire’ and ‘Dancing Caress,’ Op. 57,” written in 1908. Whereas “Desire” uses silence and arpeggiated chords to draw the listener in, the movement of “Dancing Caress” is evident as Yefimova’s hands dance while caressing the piano’s ebony and ivory keys.

For her final selection, Yefimova performs another piece from Scriabin’s late period, “Toward the Flame, Op. 72,” written in 1914. As the composition commences, Yefimova fills the auditorium with mournful, slow rich sounds. Her bass notes rumble slowly. As she increases the dynamics, the bass line rumbles like waves before Yefimova’s left hand crosses over her right with rhythmic runs. 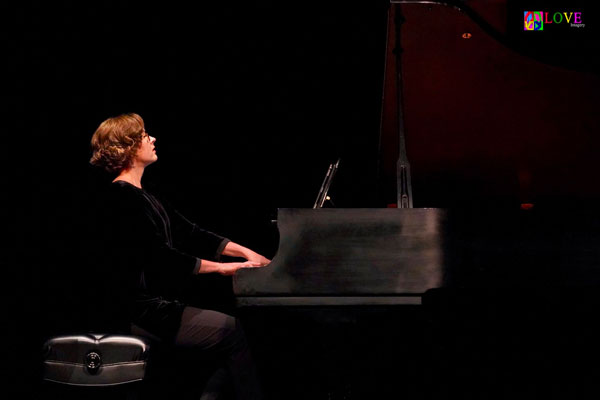 Moving forward, she drums the keys, running along rhythmically, the dissonance punctuating and fluttering. Yefimova’s two hands play musical lines which are independent of one another, their sounds melding together into one, eliciting animated applause for this gifted artist.

As members of the audience make their way out of the auditorium, we take a moment to chat with Maria Yefimova who tells us, “It was wonderful to perform here at the Grunin Center! The venue is beautiful and the sound is good,” explaining, “When I was practicing beforehand, I was happy with the responsiveness of the piano — I knew all the colors I wanted to play were all there.”

We also chat with Brian Gilmore, director of the Friday Afternoon Recital Series at Ocean County College, who says, “This concert was a beautiful journey that created the evocation of Scriabin’s music — a journey that made Scriabin more accessible to the listener.” Adds Gilmore, “For those who are interested in classical music, our final concert of the season will take place on Friday, May 20, 2022. It will be a Faculty Chamber Recital featuring Beomjae Kim on flute, Jee Sun Lee on violin, DoYeon Kim on cello, and myself on piano, and it will be free to the public.”

We additionally chat with several audience members who share their thoughts with us on this afternoon’s program by Maria Yefimova. Angie from Jackson calls Yefimova’s performance, “Really good!” and Liz from Jackson concurs, adding, “It was very informative, too.” Justin from Jackson declares, “The left-handed piece was very cool!” and Mary from Lakewood relates, “Maria Yefimova has dexterity and strength in her fingers, yet she can play softly too. Watching her, it seems like her fingers were floating sometimes.”

Jessica from Jackson tells us that this afternoon’s performance was her first classical music concert, disclosing, “It was absolutely beautiful! I liked closing my eyes and just relaxing to the music.” 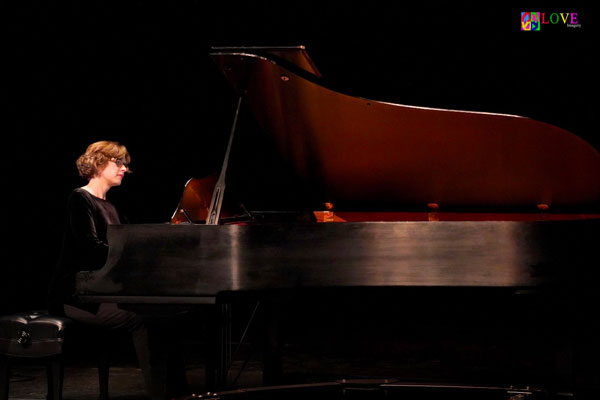 Julie from Toms River acknowledges, “I loved the pieces from Scriabin’s ‘early period’ — my six-year-old son did, too — and I also loved the lecture which took place between the pieces.” Denise from Toms River agrees, explaining, “It was really great having all the information about the music we were hearing.”

Janet from Spring Lake confesses, “Prior to today, I didn’t know much about Scriabin, so it was interesting to hear his life story,” before noting, “Maria Yefimova’s performance was wonderful. She’s very graceful — I just loved watching the way she used her hands as she played.” Her companion, Bill from Brick, exclaims, “It was fascinating to a non-musician like me to watch her play that piece with just her left hand!”

Lastly, we chat with Owen, an up-and-coming musician from Toms River, who describes today’s presentation as, “Very interesting!” Explaining, “It was my first introduction to Scriabin,” Owen concludes by declaring, “I found the music very moving, and Maria Yefimova gave one excellent performance!” 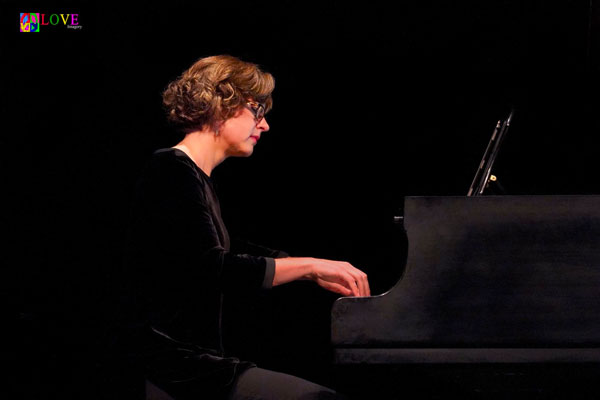 To learn more about Maria Yefimova, please go to mariayefimova.com. For further information on upcoming performances at the Grunin Center — including the free Faculty Chamber Recital on May 20, 2022 — please go to grunincenter.org.