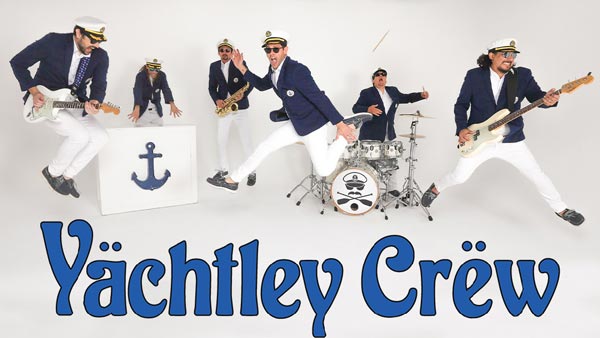 Los Angeles area-based yacht rock band Yächtley Crëw have set sail on their 2022 Anchors Up Tour and will perform May 2, Sony Hall, New York City; May 5, URSB Carteret Performing Arts & Events Center, Carteret, and May 6, Tropicana Showroom, Atlantic City. Known as “The Titans of Soft Rock,” Yachtley Crew encapsulate the feel-good, chart-topping soft rock hits of the late ’70s and early ’80s. Gushy love songs, whaling saxophone solos and memorable hooks will have you unabashedly singing along and donning a captain’s hat of your own as you’re taken on a trip down memory lane.

Yächtley Crëw perform timeless hits by Steely Dan, Michael McDonald, Boz Scaggs, Christopher Cross, Toto, Bee Gees, Hall & Oates, Styx and more! As evidenced during a residency at L.A.’s legendary Viper Room, the summer breezy band bring fun and showmanship to their performances while entertaining younger and older audience members alike. Whether you’re hearing these songs for the first time or remember singing along with them on your AM radio, you will love the look of their thematic nautical suits and highly entertaining choreography.

Yet, fear not, ye fans of hard rock. The band’s name was inspired by none other than the infamous L.A. outfit Motley Crue.  Please enjoy the following chat with vocalist Philly Ocean and drummer Sailor Hawkins.

What is it about Yacht Rock that is so appealing to the band members and their audience?

It’s impossible not to sing along and feel good when you hear this music. There’s so much nostalgia linked to these songs, and so many memories. They’re iconic, and known throughout the world. And they are really good songs! One of the best parts about what we do is seeing two hours of smiles on our audience.

Did you enjoy this kind of music as a kid or did you gravitate to it when you got older?

Both. Every single band member has childhood memories of these songs, cruising in the car with the windows down on a hot summer night. But the really cool thing has been to rediscover this music all over again as adults, and to endeavor to play it like the original recording. Again, this music is feel good and timeless. It makes it easy to fall in love with this music all over again.

For those who haven’t experienced it yet, what is the best part of a Yachtley Crew concert?

It’s not just a concert, it’s a show. As much as we love Yacht Rock, we love performing just as much. We bring that love to every single gig that we play, and we have a blast doing it. We think that the best part about a Yachtley Crew concert is that everyone is a part of it. People show up wearing captain’s hats and sailor outfits. They come ready to dance and sing and party, and they leave having had one of the most fun nights of their life.

Out of all the songs within your repertoire, which do you like to perform most and why?

We are gonna have to go with ‘Escape (The Pina Colada Song)’ on this one. Every single time we play this song, the crowd loses their minds and sings along. It’s the best.

Have you gotten any feedback from any of the acts you cover?

We actually have! Peter Beckett -- the voice of Player -- has joined us onstage a few times to perform his classic, ‘Baby Come Back.’ Also, Elliot Lurie -- voice of Looking Glass -- has sat in with us too to sing his hit song, ‘Brandy (You’re a Fine Girl).’

How did Yachtley Crew band together and get its name?

Like many great things, Yachtley Crew was born in a hot tub over a cold beer. Our founders, Baba Buoy (bass) and Sailor Hawkins (drums) have been lifelong friends and musicians, and carefully assembled the band over a year of jam sessions to ensure just the right chemistry. Now we are one big happy Yacht Rock family who love the genre just as much as our fans. The name Yachtley Crew is a nod to our love of hard rock, Motley Crue, and we like to think that we add just a little bit of “oomph” to the soft rock hits we play.

The band recently renamed the drummer Sailor Hawkins in honor of the recently deceased Taylor Hawkins, and also in honor of him, you’re covering Foo Fighters’ ‘Hero,’ which also isn’t yacht rock. Why is it important to Yachtley Crew to honor Taylor in this way?

What’s the most nautical experience the band has had?

Our most nautical experience ever is probably getting ferried out to Catalina Island to play at their Buccaneer Days event. Such a blast! Everyone dressed as captains and pirates marooned on an island for a weekend.