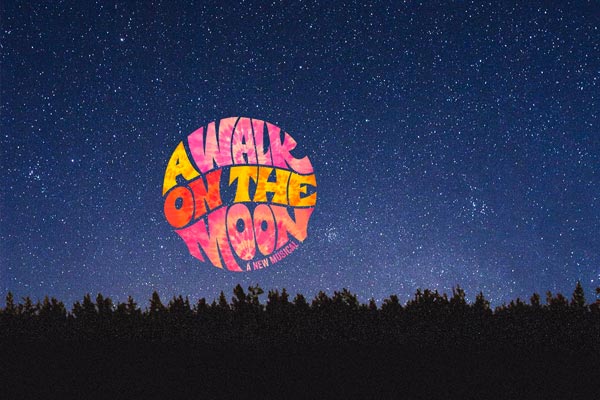 Like so many things, Gray’s response has to do with the COVID pandemic. The musical, based on Gray’s screenplay for the 1999 film of the same name, was supposed to open at George Street two years ago.

“I had already shipped my clothes to New York,” Gray said. “I was supposed to get on a plane the day after the world shut down”—meaning the day indoor gatherings, such as theater events, became verboten.

But the pandemic has waned enough to allow theaters to reopen, and A Walk on the Moon is being presented by George Street April 26 through May 21.

The play—perhaps the largest production in the history of the playhouse—is the tale of four working-class Jewish families who vacation annually at a bungalow colony in the Catskills and are doing so again in the summer of 1969, a setting Gray drew from her own experience. The adults in the play expect, in fact most of them want, this year’s vacation to be identical to last year’s. The women will play mah-jongg; the men, who commute from their jobs every weekend, will compete for the shortest travel time on Route 17.

But this summer, the deliberate sameness of these getaways is cast against two world-changing events—the Apollo 11 moon landing and the Woodstock Festival—and the anti-Vietnam War and pro-civil rights sentiment roiling the country.

One vacationer who is primed to scotch the yearly routine is teenager Alison Kantrowitz. She bristles at being forced to spend time with a gaggle of out-of-touch adults. She rails against the cost of a lunar landing while poverty persists on earth. She aches to join the public protests against the war. And that rock festival, not that far away in upstate New York—well that’s a siren song amplified by Alison’s new acquaintance, young guitar-playing Ross Epstein.

An adult in this party who becomes increasingly unsettled in the familiar surroundings of the bungalows is Pearl Kantrowitz, mother of Alison and wife of TV repairman Marty. For Pearl, the moon walk becomes a reminder that big things are happening, and she is not a part of them. She mourns a youthful dream that was smothered by a humdrum life. She is frustrated with Marty, who is too busy fixing TVs to spend time with her. She listens to Alison’s challenging ideas about war and social responsibility and to Bunny, a friend who has read The Feminine Mystique. And she meets Walker Jerome, an itinerant blouse salesman who pays attention to her, gives her his phone number, and is heading to San Francisco after Labor Day. “It’s 1969 there, too,” Pearl tells him. “Is it?” he asks.

A Walk on the Moon was staged by the American Conservatory Theater in San Francisco in June 2018. In the intervening time, Gray said, the play has evolved, not in terms of wholesale change but rather in terms of bringing to the surface themes that were there all along. Public events were catalysts for this evolution, she said, including the rising anti-Semitism during the Trump years, the murder of George Floyd, and the reaction—in the streets—to that crime.

“From the time I wrote the screen play,” Gray said, “my goal was to present a slice of working-class Jewish life that other people don’t know about, to remind the audience that Jews were in these places because they didn’t feel safe elsewhere. Nineteen sixty-nine was not that far from the Holocaust, and there had been so much antisemitism since then. In the first six months of 1969, seven temples were firebombed. A temple was demolished in Far Rockaway that wasn’t rebuilt until the 1980s.

“The bungalow colonies started in the 1930s. There was fun and love and camaraderie, but the Jews were there for a reason,” a reason that is alluded to in the play. In that respect, Gray said, the play dramatizes what it is like to be outsiders. “We don’t experience the horrors that black people and other people of color experience,” she said, “and yet we live with this inside of us.”

Another issue Gray and director Sheryl Kaller focused on after 2018 was the feminism that is inherent in the play. When Bunny explains that Betty Freidan writes in A Feminine Mystique that it’s a myth that women don’t want to go to college and have careers, and that someday they will have jobs and be paid as men are paid, Pearl’s mother-in-law responds, “As if that would ever happen.”

“We’re still fighting battles as women that we would not have expected to be fighting now,” Gray said. “Pearl is a woman who didn’t get to live her full life, who didn’t have choices. That’s still sadly relevant.”

Pearl has to make serious choices in this play, and Gray is passionate in her desire that the character not be regarded unfairly. Gray wants people to realize that Pearl represents all women who are not fully recognized and acknowledged as human beings.

“Even from the time I wrote the screenplay, I knew there are people who will judge her harshly and think she did something morally reprehensible. I want people to understand her, to know all the reasons this could happen to this woman that summer.”

Gray said that one more thing that she and her creative team noted was a resurgence of mass protests in the aftermath of George Floyd’s death. “So many times the press said, ‘Not since the ‘60s have we seen this,’” she recalled. “In ’69, young people were protesting in the streets. There was a sense that they had a voice, that they could change the world, that they felt responsible for changing the world because of the war in Vietnam and atrocities against blacks.”

In a pivotal moment in the play, Alison, whom Gray describes as “a girl who believes she can stop the Vietnam war if she fights hard enough,” joins Pearl watching a TV news report of civil rights leader Ralph Abernathy leading a peaceful protest outside the Kennedy Space Center on the eve of the launch. Mother and daughter listen, and hear, as Abernathy says, “We may go from this day to Mars and to Jupiter, and even to the heavens beyond, but as long as racism, poverty, war and hunger prevail on the earth, we as a civilized nation have failed.”

A Walk on the Moon, with music and lyrics by Paul Scott Goodman and AnnMarie Milazzo, is being presented on the Elizabeth Ross Johnson Theatre stage at the New Brunswick Performing Arts Center. Click here for ticket information.