On view through May 8, 2022 at Newark Museum of Art, Carlos Villa: Worlds In Collision presents 35 rarely seen works by Carlos Villa, a central figure in the San Francisco art community and a leader in the multicultural activism of the 1960s and beyond. Along with the exhibit and programs, the Museum has launched The Filipino Oral History Project with Rutgers University and welcome the community to share their histories.

When his professor at the San Francisco Art Institute suggested that “there is no Filipino art history,” Carlos Villa took it as a challenge. In a search for his own cultural roots, he began what would be a life-long exploration of his Filipino American background, as well as exploration of other artistic cultures that had been disrupted by colonization and war, including Asian, African, Indian, and Oceanic cultures.

On view through May 8, 2022 Carlos Villa: Worlds In Collision at the Newark Museum of Art, presents 35 rarely seen works by Villa, a central figure in the San Francisco art community and a leader in the multicultural activism movement of the 1960s and beyond. Remarkably, “Worlds in Collision” may be the first major museum retrospective dedicated to the work of a Filipino American artist in the United States. 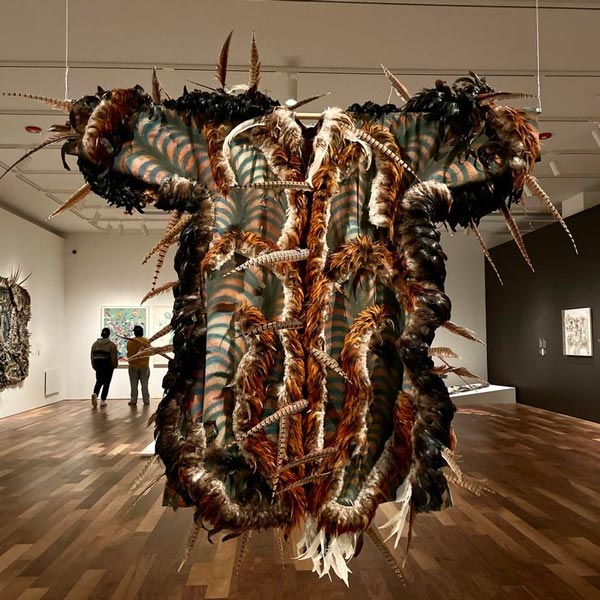 Among the most striking works in the exhibit are Villa’s dramatic capes and cloaks, embellished with feathers and lined with taffeta, referencing human adornment and ritual objects drawn from traditions of the Philippines and Pacific tribal art. These works demonstrate Villa’s interest in the idea of the artist as shaman, as well as his multicultural influences.

“He wasn't influenced by any one region, but he was incorporating all these different materials and traditions from many aboriginal sources to create his own style and visual language,” explains Elena Muñoz-Rodriguez, Curatorial Assistant at the Newark Museum. “The tattoo portraits for example are influenced by, but not specific to, the Philippines or any single region in the South Pacific.” Muñoz-Rodriguez worked closely on this exhibit with Newark Museum curator Tricia Laughlin Bloom, as well as San Francisco-based curators Trisha Lagaso Goldberg and Mark D. Johnson, who knew the artist personally.

A first-generation Filipino-American, Villa (1936–2013) was born and spent most of his life in the Tenderloin neighborhood of San Francisco, an area once known as Manilla Town due to the large population of immigrants from the Philippines. From 1964-69, he lived in New York, before returning to San Francisco. His works from this time include meditative drawings featuring vibrant, spiral patterns.

According to Muñoz-Rodriguez, drawing spirals may have started as a way for the artist to unwind during off hours from his bar-tending job. Eventually, spirals became an important motif in his visual language, appearing in many of his large-scale works from the 1970s including wall hangings and garments.

During the period when Villa was living in New York, the Newark Museum of Art presented a show of oceanic artworks titled Art of The South Sea Islands. The exhibit featured the type of ethnographic objects Villa soon began to reference in his work. The relationship between these objects and Villa’s work is so strong that the curatorial team believes that it is possible he visited the Museum in 1967. “There's no definitive proof, but the timing is extremely interesting.” explains Muñoz-Rodriguez. 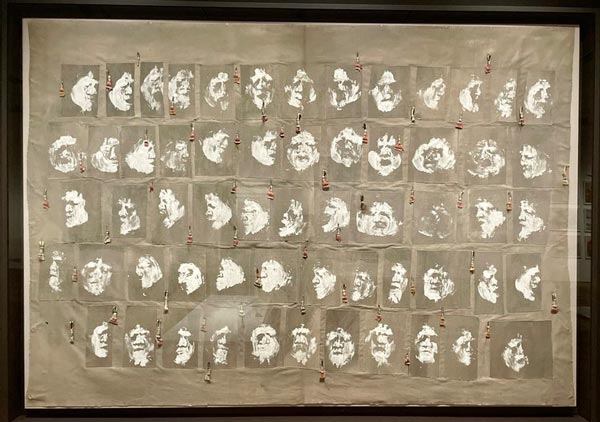 Around 1980, Villa expanded his exploration of identity by using his own body to create prints and plaster casts. The haunting work, “First Impressions,” is comprised of nearly 60 prints of the artist’s face. Created after the death of his mother, Villa said he often saw her face in this work.

In the 1990s, as his work became increasingly minimalistic, Villa focused on the experience of the Manongs, the Filipino immigrants of his parents’ generation. The Manong immigrant community was made up of mostly men, because of immigration laws in the 1930s. While the US offered Filipino men jobs in factories, farms, and railroads, immigration policies kept the workers from bringing their families over and stopped them from marrying white women. A photo from Villa’s baptism reflects this gender disparity as there appears to be only one woman present in a room full of men.

Many Manongs settled in the racially segregated city of San Francisco, forming a community on a 10 block stretch of Kearny Street. One of the most compelling works in the show, titled “My Father Walking Up Kearny Street for the First Time,” tells the story of their experience. A man – invisible except for his fedora – moves through towers made of slick, shiny black feathers. A tiny plaque at the vanishing point reads “desire,” as we see what the man is moving towards. Above, the sign “orient” holds double meaning, referring to the place of the Orient, as well as the action, meaning to familiarize oneself.

The title of the exhibit, Worlds in Collision, comes from a project that Villa founded and operated to highlight the work of forgotten or neglected art and artists. From 1976 until his death in 2013, Villa organized important exhibitions, performances, publications, and more as part of this comprehensive project. Worlds in Collision sought to exhibit work of women artists and artists of color from varied ethnic and cultural backgrounds, with the intention of shaping a more inclusive art world and art history.

MORE TO SEE AND DO:

In conjunction with Worlds in Collision, the Newark Museum of Art has launched an oral history project with Rutgers University and welcome the community to share their histories. To learn about upcoming opportunities for sharing your story as part of The Filipino American Oral History project contact emunoz@newarkmuseumart.org.

Thursday, April 21, 7pm, the Newark Museum offers a celebration of Carlos Villa’s legacy as a teacher in this multimedia presentation. Filipinx artists and writers share stories about a teacher that changed their life through a dynamic evening of storytelling, song, and movement.

A companion exhibition is on view in the Asian galleries. Worlds In Collision: Selections from the Asian Pacific Collection, presents the type of ethnographic objects Villa referenced in his work, was known to have studied and could even have seen at the museum. All works from the museum’s distinguished collection of Oceanic ethnographic and Filipino art. “It’s part of the significance of having Villa’s work exhibited here in Newark, in this venue,” says Muñoz-Rodriguez.

Everyone, including Members, Newark Residents, and affiliate partners, must reserve timed tickets in advance. There will be no on-site ticket sales. Membership cards and other applicable IDs will be verified upon entry.

Effective March 28, 2022, the Museum will no longer require proof of vaccination, negative COVID-19 tests, or temperature screenings. The use of masks will be strongly encouraged but not mandatory.

A virtual tour of the exhibit is available here.