Review of "The Wanderer" at Paper Mill Playhouse 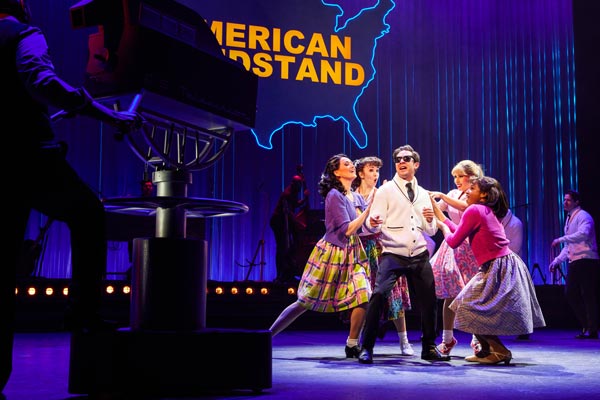 Biographical jukebox musicals follow an established path – heroic artist is especially talented; challenged by demons (bad relationships or addiction); defy barriers and the adoring crowd stands soaking in hit from a bygone time.  Michael Wartella firmly joins the pantheon of supremely talented theatrical performers who embody a real-life rocker and slays with an iconic performance.  At the Paper Mill Playhouse, he owns the theater as doo wop/rocker Dion in a new production “The Wanderer.”

Set in the Bronx, with beautifully rendered scenic design by Tony Award winner Beowulf Boritt.  The set has a church looming in the background with apartments and retail on each side.  Each side rotates to reveal the insides and balconies of apartments.  It’s a rich visual that perfectly sets the scene and serves the musical boldly. 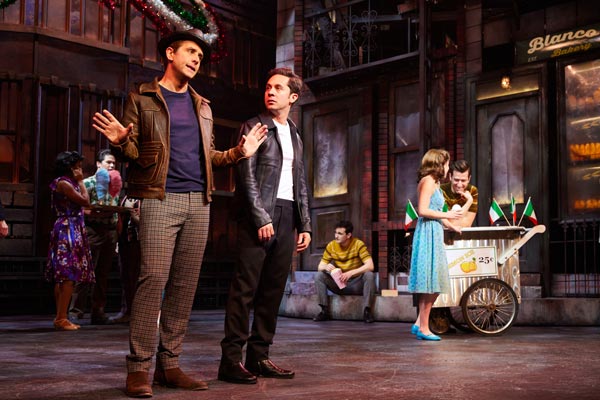 Dion is a teenager who loves music.  With a few pals, he quickly moves from street singer to recording artist. Dion & The Belmonts (named for their Bronx street) rack hits like “I Wonder Why,” “A Teenager In Love” and “Where or When.”  But Dion slowly develops a heroin habit enabled by Johnny (Joey McIntyre).  The habit gets worse after Dion avoids being aboard the plane carrying tour-mates The Big Bopper, Richie Valens, and Buddy Holly.  He luckily/wisely chaffs at paying the $36 ticket fee noting it’s the same amount as his parent’s apartment rent.

Act two veers into the mourning of his tour-mates, worsening addiction, and chaffing at being trapped as a doo wooper or crooner when he’s got the soul of a rocker.  The clunky book by Charles Messina is a character of its own straight out of the Bronx – filled with the wisdom of one who doesn’t read past the headlines of Wikipedia.

McIntyre (New Kids on the Block) plays a stock demon with cool Mephistophelean charm.  One wishes his big number wasn’t lost largely to an overwhelmingly bombastic aural choice.  He’s there to be a marketing hook for a certain audience demographic and he’s largely wasted as a wise enabler.  Smart casting, cringey character. 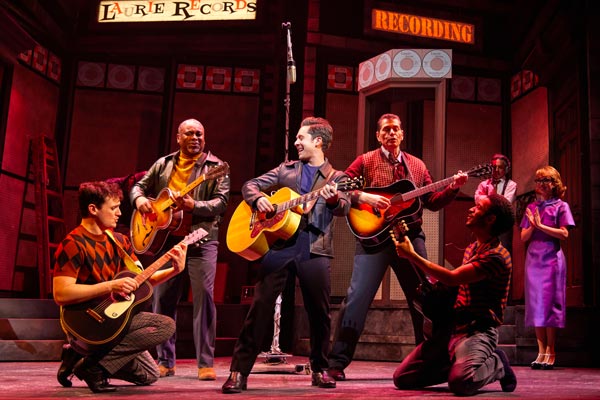 Aptly cast by The Telsey Office, “The Wanderer” features Christy Altomare (Anastasia) as Susan (Dion’s eventual wife) and Kingsley Leggs (Broadway’s The Color Purple) as Willie Green, Jasmine Rogers (Becoming Nancy) as Melody Green.  Here one wishes writer Messina had leaned into the real-life characters who battled their own demons in Dion’s life and given Leggs, Rogers, and Altomare much more to do.  These talents have some wonderfuly singing moments and add warmth swatting mightily at the cloying hackneyed cliches of the book.  No one real or imagined amazingly talented as this cast should be forced to utter amalgamations of Shakespeare and AA websites or clunkers like “Doo wop is what us Wops do.” McIntyre is forced to force out teen dream board trip aphorisms about wealth, honor, pleasure and power and “falling stars are precious rocks.”  There’s a priest on hand to note that “things don’t change, you do.”  The book dangles precariously into bio musical satire, redeemed by mightily realistic performances of note.

There’s clearly an authentic richness of characters in Dion’s Bronx neighborhood – from the joy buzzing loving record store owner to his own parents (mom in love with a dead fiancée and dad loving marionettes over his son, but still finding time to manage and benefit from Dion’s career).  Wartella and all these performers deserve so much more to play. 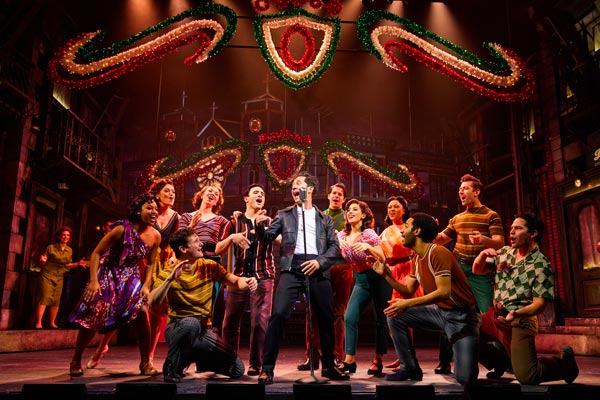 Altomare and Rogers sing beautifully.  Johnny Tammaro (Tony n’ Tina’s Wedding) as Pat DiMucci, and Joli Tribuzio (A Room of My Own) as Frances DiMucci wring pathos from the biographic crumbs they’re given as Dion’s parents.

Directed by Kenneth Ferrone the production has a zippy first act.  The second is weighed down by the pitfalls of bio musicals -- demons and redemption.  Sarah O’Gleby (Disney’s Frozen) has some beautiful athletic, richly wrought movements for group numbers.

But the night belongs to Wartella.  Here he unleashes full throttle charm, bombast, intelligence, and rock and roll.  He embodies Dion with ambition and passion for music beyond the times.  It’s a credible, full bodied award-winning, captivating performance that slays the book’s banality.  He enlivens the audience and gives pulsating life to a bio musical.  His renditions of “Runaround Sue” and “The Wanderer” resonate from Paper Mill all the way to the Rock And Roll Hall of Fame.

The show has Broadway ambitions.  With some prudent rewrites and sound design rethinking, Dion could truly rock.  See it now for the incredible cast.

Tickets and more information is available at papermill.org. The production runs until April 24, 2022.  Paper Mill Playhouse is located at 22 Brookside Drive in Millburn, New Jersey. 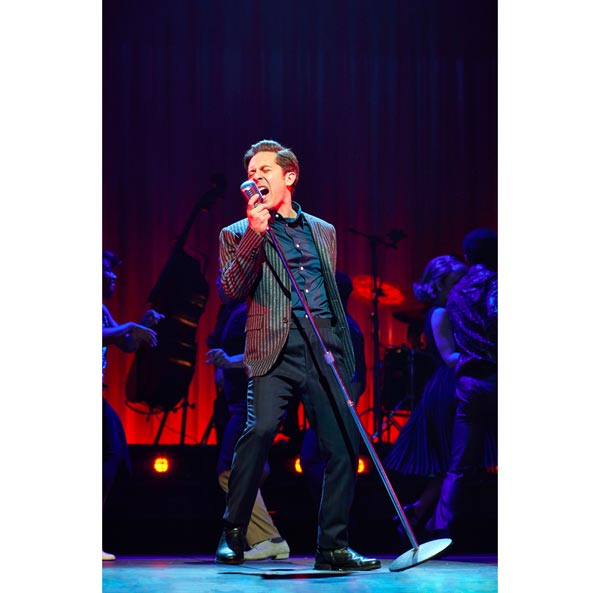 ALL PHOTOS BY JEREMY DANIEL