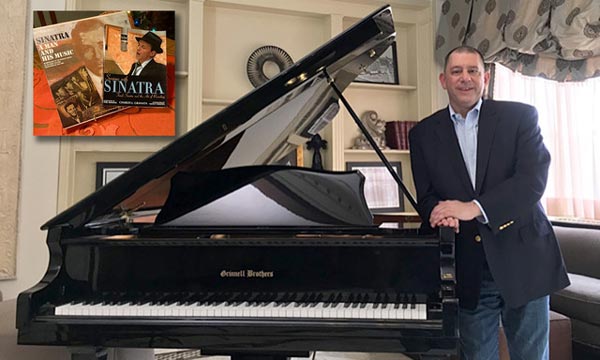 (AVON-BY-THE-SEA, NJ) -- A swingin’ nice and easy special event, featuring the music of Frank Sinatra, is being presented by producer Karen Morris of Sand Castle Communications on Sunday, May 1, 2022, beginning promptly at 12:30pm until 3:00pm, at The Avon Marina Building, 2 Main Street, Avon-By-The-Sea. The theme of the event is Nice 'n’ Easy, which is also the title of a 1960 album and song made popular by Frank Sinatra.

There will be a mix of live entertainment, a tasty buffet lunch and an informative, easygoing chat by two notable Frank Sinatra scholars, Charles “Chuck” Granata and Dana Polan. All happening alongside a delightful picturesque view of the marina.

This is the third event, in a special series produced by Ms. Morris, where Mr. Granata and Mr. Polan together have shared their fascinating insights and personal stories about Mr. Sinatra.

Charles L. “Chuck” Granata, a leading expert on Frank Sinatra, is a writer, record producer, music historian and archivist. Mr. Granata is the author of 4 books, including the award-winning book Sessions with Sinatra: Frank Sinatra and the Art of Recording, which has been identified as one of the most important studies of Sinatra the recording artist. He is also the producer of Nancy Sinatra’s weekly radio program “Nancy for Frank” on Sirius-XM radio.

Dana Polan is Professor of Cinema Studies at New York University. He has taught about Frank Sinatra at NYU and has lectured about him at Ohio State University and Notre Dame. He is the author of 10 books in film and media, including Dreams of Flight, The Great Escape in American Film and Culture, The Lego Movie, The Sopranos, and Scenes of Instruction: The Beginnings of the U.S. Study of Film. He is the former President of the Society for Cinema Studies, and in 2003 was selected as one of that year’s Academy Foundation Scholars by the Academy of Motion Picture Arts and Sciences.

The Nice and Easy afternoon event also includes a performance by Jazz vocalist Zack Alexander, who specializes in the style of Frank Sinatra and The Rat Pack. As the winner of the 2016 ‘Sinatra Idol’ competition in Hoboken, he is dedicated to bringing the Great American Songbook to life for current and future generations. Zack performs throughout the Tri-State area at a variety of venues, as well as with the 20-piece Swingtime Big Band ensemble, which Newsday hailed as “Long Island's leading professional big band...dedicated to the Great American Songbook.”

Event guests will have the option to sit outdoors as well as indoors, and listen to the music and discussion.

Advance tickets are required to attend. Tickets will go on sale on April 2nd, 2022.  A code number will be required to enter the ticket site to purchase. For more info, contact Karen Morris at  sand3737@gmail.com