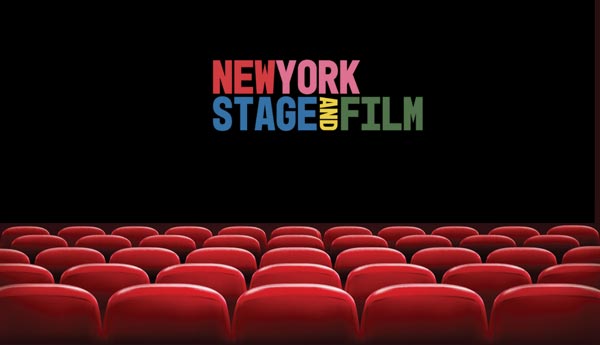 New York Stage and Film, called a “formidable breeding ground for new work” by the New York Times, is honored to welcome Mallom Liggon as the new Director of the Filmmakers’ Workshop. NYSAF is also announcing the 9 early-career film and TV writers who have been selected to participate in the 2022 Filmmakers Workshop.

“I am thrilled that Mallom Liggon is joining New York Stage and Film as Director of the Filmmakers’ Workshop,” said Award-Winning Producer Shelby Stone. "Having been a mentor and advisor in this program, I know the opportunity for screenwriters honing their projects.  Mallom is a remarkably talented artist and producer who will develop the program to its fullest potential.”

“The Filmmakers’ Workshop continues to provide a safe, nurturing, and creatively challenging environment for the next generation of filmmakers,” said Mallom Liggon. "I’m excited to serve our talented and driven cohort, and work with the team to expand our opportunity to give back in the future.”

The participants were selected by a panel of industry professionals and prior program participants. Comprising the final selection committee were former program participants Nichole Abshire and Guru Ramanathan; former program leaders Luis Castro and Marin Gazzaniga; and NYSAF Producing Director and Co-Founder Leslie Urdang.  The writers will be paired with professional mentors for a year-long program of intensive creative discussions, peer feedback, developmental readings, classes on pitching, TV staffing, editing, navigating the notes process and career strategies as well as industry networking. 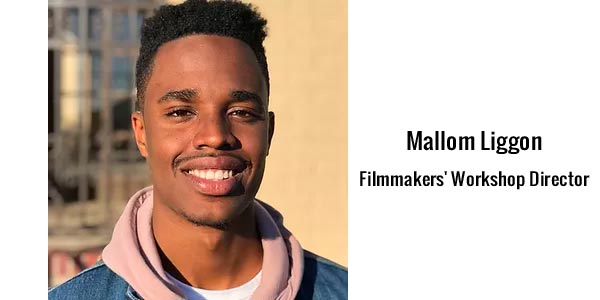 MALLOM LIGGON (Director of the Filmmakers’ Workshop) is a graduate of Loyola Marymount University, where he studied Screenwriting and African American Studies. During his time at LMU, he served as Director of Impact and Partnerships for Diverso, a student-run nonprofit that builds initiatives for diverse students to break into the entertainment industry. At Diverso, Mallom co-created and served as co-program director of Black Writers In Focus, the first-ever paid internship program for Black screenwriters. As a senior at LMU, Mallom led a successful fundraising campaign, with donors including Issa Rae and Deniese Davis's COLOR CREATIVE, Oprah Winfrey's OWN, WARNER MEDIA, and more to make the program a reality. As program director, Mallom coordinated a curriculum and marketing push that included mentors and speakers like Joe Robert Cole (Black Panther), Chloe Zhao (Nomadland), Barry Jenkins (Moonlight), and others. Mallom's passion for creating stories, and helping others, comes from his past as someone who overcame behavioral issues in his youth. As a storyteller and philanthropist, Mallom loves to give second chances to his characters, and to as many others as possible through his educational diversity work, just like his teachers and loved ones gave him one when he needed it most. 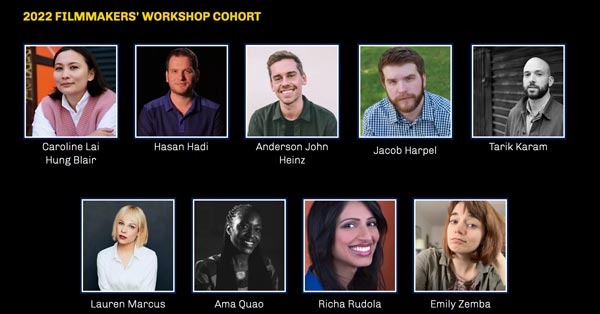 Caroline Lai Hung Blair is a television writer and filmmaker from Honolulu.  A fourth-generation Chinese and Japanese American, her writing explores the rage and desire of Asian American women through many genres, but with particular emphasis on romance and mystery.  She received her MFA in Film from Columbia University where she received several awards and fellowships including the Jack Larson Award for Collaboration and the Arthur Krim Memorial Award. She is currently a showrunner’s assistant at Universal Television.

Hasan Hadi is an Iraqi writer/director based in New York. His short, SWIMSUIT won an Oscar-qualified award at Urbanworld. Hasan’s recognitions include the Tisch Dean’s Fellowship, The Gotham-Marcie Bloom Fellowship, the Black Family Production Prize, the Sloan Foundation Award and the BAFTA Newcomers Program. Currently, Hasan is an adjunct professor at NYU's Graduate Film Program."

Jacob Harpel is a Los Angeles-based writer from Dallas, Texas. With an immense passion for horror, Jacob uses the ever-evolving genre to explore complex family dynamics, psychological repression and the endless terrors of growing up in the southern suburbs. His horror comedy pilot “Possessed!” has landed in the top 10% of several ScreenCraft contests while his thriller feature My Own Flesh and Blood recently placed as a second rounder in the Austin Film Festival Script Competition. Graduating from the University of North Texas with a Bachelor’s in Film and Television, Jacob’s writing career began on the Dallas-produced cable network docuseries Murder Made Me Famous where he received the opportunity to write two episodes after turning in a spec to his showrunner. Since his move to California, Jacob has had the great fortune to work as a synopsis writer for Netflix while developing his own projects for the screen.

Anderson John Heinz is a playwright, screenwriter and poet. His full-length plays include BEFORE THE DEVIL MADE ME RUN, PAINTED BRICK/WHITE HOUSES, RITA IN THAILAND and BABY ALLEN. Anderson's theatrical work has been presented at Joe’s Pub, The Flea, The Tank, The Brick, New York Theatre Barn, Tiny Rhino and several of Brooklyn’s most lavish living rooms. His serialized play SOUTH BEND <3 STORY, a comedic imagining of Chasten and Pete Buttigieg on the presidential campaign trail, won the Peoples Improv Theater’s inaugural Show of Shows competition. Anderson is a current member of the Dramatists Guilds writers’ group and a former member of the Project Y and Musical Theatre Factory writers’ groups. He currently serves as Office Manager/Executive Assistant with Daryl Roth Productions. He formerly served as Showrunners’ PA to Michelle and Robert King on their shows THE GOOD FIGHT and EVIL (both streaming on Paramount+).

Tarik Karam is an Arab-American filmmaker based in New York. After graduating from the American Film Institute, he co-produced and directed Second Unit on the Oscar®- nominated film Extremely Loud & Incredibly Close after working in a similar capacity on Oscar®-nominated The Reader. Since then, his short films have premiered at festivals such as Tribeca and Clermont-Ferrand while also being Vimeo Staff Picks. For Netflix, he has directed What They Left Behind, an award-winning gun violence documentary, as well as several episodes of a racing documentary series. Tarik has also produced The House of Tomorrow starring Oscar®-winner Ellen Burstyn, Nick Offerman, Asa Butterfield, and Alex Wolff. Tarik’s screenplays have been selected for Sundance’s Producing Lab, Film Independent’s Screenwriting Lab, awarded as quarter finalist in the Nicholl Fellowships, and finalist in American Zoetrope’s Screenplay Competition. On the commercial front, Tarik has directed award winning content for The New York Times, Johnson & Johnson, McDonald’s, The Wall Street Journal, and many others.

Lauren Marcus is an actor and writing living in NYC. She is currently developing her television pilot, Honest Living, as well as her new musical, Lauren and The Case of The Missing Hair (book/music/lyrics), which is receiving a 29-hour developmental reading from Two River Theater this winter. Lauren is a recipient of the 2021 Penn State New Musical Theatre Initiative Commission (alongside Alexander Sage Oyen, music, and James Presson, book). Lauren’s children’s musical, The Meanest Birthday Girl (book/lyrics), ran as part of the 2015 NY Children’s Theatre Festival at the Players Theatre. Love Letter (book and original music co-written by Joe Iconis), a hybrid cabaret/musical/rock show celebrating Johnny Cash and June Carter Cash, played sold out runs at Don’t Tell Mama’s and Feinstein’s/54 Below in 2017 and 2019. As a singer-songwriter, Lauren released her debut EP, Never Really Done With You, in 2016. She held residencies at Rockwood Music Hall in 2019 and 2021. Lauren made her 2019 Broadway debut in the original cast of Be More Chill. Her feature film debut recently occurred in Lin- Manuel Miranda’s tick, tick...BOOM! She is an alumnus of the Johnny Mercer Foundation Songwriters Project.

Ama Quao is a first-generation African American comedy writer who recently relocated to Los Angeles from New York. Originally from Murfreesboro, Tennessee, she studied playwriting and American Studies at Brown and received her MFA in Screenwriting from Columbia University. While at Columbia, she interned at A24 as a development intern and studied improv at UCB before working as a writers’ assistant on JJ Abrams’ Demimonde on HBO, Apple TV’s Shining Girls, and the upcoming Amazon Original, Outer Range. Ama won best screenplay at the 2020 Urbanworld film festival and was selected as a fellow for the 2021 Disney General Entertainment Writing program. This year, she worked as a staff writer on the upcoming Freeform show, Single Drunk Female and Hulu’s How I Met Your Father.

Richa Rudola is an NYC-based statistician-turned-filmmaker from India. Her films have screened at 45+ festivals around the world and won 10+ awards. Her work has been supported by The Future Of Film Is Female, Stowe Narrative Lab, Tasveer, and Diverse Intelligence Summer Institute.  Current projects include a TV series in development about neuroscience which won Best Hour Pilot at the 2020 Nashville Film Festival and is currently on the Coverfly RED List for Top TV Dramas for 2021, and a genre anthology piece for the 2022 Open Door Film Project. Her work has been profiled in Women & Hollywood, Brown Girl Magazine, several podcasts, and more. Richa is a strong proponent for increasing diversity in storytelling and serves as the Vice President of Development for NYC Women Filmmakers, a non-profit organization dedicated to supporting women in film. She is drawn to stories of courage, even more as a new mother.

Emily Zemba is a Brooklyn-based playwright, screenwriter, and occasional puppeteer. The recent production of her play Superstitions – as part of The Pool 2021 – was praised by New York Magazine as “elegant and weird” and “a return to what Off-Off was originally for.” Some of Emily’s other plays include Deer and the Lovers (First Floor Theater), Clockwork (Local Lab), On Loss and Mice and Monsters and Love (LPAC), and Have You Been There (Rattlestick F*ck!ng Good Plays Festival). Her work has been developed with places like Boston Court Pasadena, ANT Fest, Exquisite Corpse, Theater Masters, Adam Mickiewicz Institute (Poland), Two River Theater ... and also at places not like them at all. She is an affiliated artist with New Georges and The Playwrights Center. Emily’s short film Out of Office was an official selection of the 2021 Chattanooga Film Festival (co-directed with Emma Wiseman). This spring Emily will be co-creating an original audio tour for Oklahoma City as part of OKC Rep’s “Reboot Season.” Her newest play The Strangers Came Today, created with joint-stock collective SOCIETY, will be produced June 2022 in rep with a world premiere by Mona Mansour.

NEW YORK STAGE AND FILM (Christopher Burney, Artistic Director; Thomas Pearson, Executive Director; Mark Linn-Baker, Max Mayer, Johanna Pfaelzer, Leslie Urdang, Producing Directors) is a not-for-profit company dedicated to both emerging and established artists in the development of new works for theater and film. Since 1985, New York Stage and Film has played a significant role in the development of new plays, provided a home for a diverse group of artists free from critical and commercial pressures, and established itself as a vital cultural institution for residents of the Hudson Valley and the New York metropolitan region.