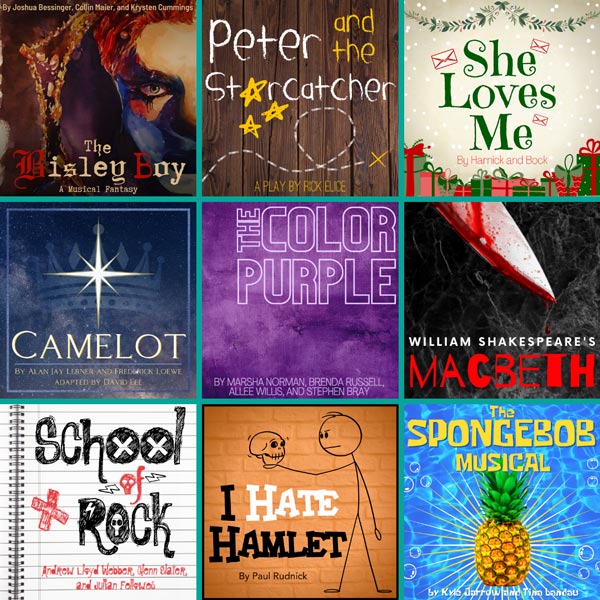 (HADDON TOWNSHIP, NJ) -- Following a triumphant “Grand Reopening” back in September and amid a booming return season, The Ritz Theatre Company aims to make a giant splash in the months ahead, officially announcing a new season that reinforces the organization’s ongoing commitment to “embracing diversity in our stories and those who share them.”

“If you can’t tell from my own pronouncements online and on social media, I am absolutely thrilled about our 2022-2023 season and the response it’s received thus far,” says Producing Artistic Director Bruce A. Curless. “It’s just what we wanted: a vibrant, all-inclusive, multifarious season with something for virtually every theatregoer. We have everything from an original musical fantasy to a summer blockbuster starring a certain sponge!”

Leading off the 2022-2023 season for The Ritz is the world premiere production of The Bisley Boy, a gothic musical fantasy written by Ritz alumni Joshua Bessinger, Collin Maier, and Krysten Cummings that follows the private life of Bram Stoker, theater manager and author of Dracula. Inspired by his book Famous Imposters, Stoker proposes a legend that Queen Elizabeth I was actually a male decoy. While exploring the timeless topics of revenge, inner demons, and lost love, The Bisley Boy also explores contemporary themes of gender identity, sexuality, and the artificial creation of one’s persona. The show runs from September 16, 2022 to October 2, 2022.

Up next in the autumn is Peter and the Starcatcher, the Tony Award-winning play by Rick Elice that upends the century-old story of how a miserable orphan comes to be The Boy Who Wouldn’t Grow Up, Peter Pan. From marauding pirates and jungle tyrants to unwilling comrades and unlikely heroes, Peter and the Starcatcher playfully explores the depths of greed and the bonds of friendship. Featuring a dozen actors portraying more than 100 unforgettable characters, this family-friendly romp uses ingenious stagecraft and limitless imagination to bring the story to life. The play runs from October 21, 2022 to November 6, 2022.

For the holiday season, The Ritz is proud to present the musical romp She Loves Me, written by Joe Masteroff, Jerry Bock, and Sheldon Harnick. Considered by many to be the most charming musical ever written, She Loves Me is a warm romantic comedy with an endearing innocence and a touch of old-world elegance. The Mikos Lazlos play Parfuemerie, on which it is based, has inspired many adaptations, including the beloved film You’ve Got Mail, starring Meg Ryan and Tom Hanks. An ideal Christmas-time show, this delightful gem of a musical runs from December 2, 2022 to December 18, 2022 and will be sure to warm your heart from the winter’s cold.

The Ritz ushers in the New Year with a Black Box production of Alan Jay Lerner and Frederick Loewe’s Camelot, the award-winning, soaring musical revolving around the legendary love triangle of King Arthur, Guenevere, and Sir Lancelot. Newly adapted by David Lee, this intimate cautionary tale of idealism, hope, and love is vitally reimagined to feature a small ensemble of storytellers. Presented “in-the-round,” Camelot runs from January 13, 2023 to January 29, 2023.

The month of February has a special treat in store for theatre and literature enthusiasts, as The Ritz will present a stirring production of The Color Purple. This musical adaptation of Alice Walker’s Pulitzer Prize-winning novel follows Celie, a downtrodden young woman whose personal awakening over the course of her life forms the arc of this instant classic. Nominated for eleven Tony Awards, including Best Musical, Best Book, and Best Original Score, The Color Purple is an inspiring story of hope, a testament to the healing power of love, and a celebration of life featuring a joyous score of jazz, ragtime, gospel, and blues. The show runs from February 11, 2023 to February 26, 2023.

To kick off spring, The Ritz is set to stage an immersive and riveting production of “The Scottish Play,” better known as Macbeth. One of the most transcendent tragedies in the history of theatre, this William Shakespeare masterpiece dramatizes the damaging physical and psychological effects of political ambition on those who seek power. A brave Scottish general named Macbeth receives a prophecy from a trio of witches that one day he will become King of Scotland. Consumed by ambition and spurred to action by his wife, Macbeth finds himself in a rapidly-rising ascent of murder and deceit. Macbeth runs on The Ritz stage from March 17, 2023 to April 2, 2023.

Before the school year is out, The Ritz will invite audiences across the region to rock out to School of Rock. Based on the hit movie, this Andrew Lloyd Webber musical follows Dewey Finn, a failed, wannabe rock star who decides to earn an extra bit of cash by posing as a substitute teacher at a prestigious prep school. There he turns a class of straight-A pupils into a guitar-shredding, bass-slapping, mind-blowing rock band. School of Rock runs from May 12, 2023 to May 28, 2023.

The Ritz Black Box returns in June to welcome in a rumbustious production of Paul Rudnick’s I Hate Hamlet. Laughter, sword fights, and hijinks ensue in this classic comedy that follows successful television actor Andrew Rally as he struggles with taking on the dream role of Hamlet. Dealing with a girlfriend who is keeping a firm grasp on her chastity, Andrew plays host to the ghost of John Barrymore, who, clothed as Hamlet, has come back to convince Rally to play the part. This sidesplitting show runs at The Ritz from June 9, 2023 to June 25, 2023.

Doubling as the season’s “Finale Ultimo” and big “Summer Blockbuster” is Nickelodeon’s SpongeBob the Musical, a dynamic stage musical perfect for the entire family. Chaos erupts and lives hang in the balance as SpongeBob and all of Bikini Bottom face the total annihilation of their undersea world. Just when all hope seems lost, however, a most unexpected hero rises up and takes center stage, proving that the power of optimism really can save the world. Nominated for twelve Tony Awards, this tech-theatre marvel is sure to dazzle audiences of all ages. This final show of the season runs from July 14, 2023 to July 30, 2023.

Subscriptions to the new Ritz season are on sale now, with the organization offering more options than ever before for theatre aficionados. The new premium package, for example, bestows theatregoers with tickets to all nine shows, free snacks at the concession stand, plus additional discounts and bonuses.

“We are over-the-moon excited for the season ahead,” says Mr. Curless. “Many of you have been with us from the very beginning, many of you are just joining the ride, but we appreciate all of your time and passion about our historic theatre. I hope you join us for every scene and for every song!”