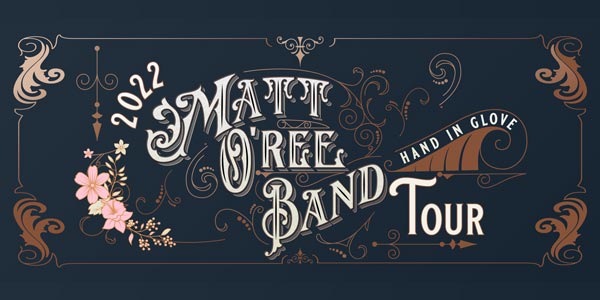 (ASBURY PARK, NJ) -- The Matt O'Ree Band will be hitting the road in support of Hand In Glove, a new album expected to be released in the Spring.  Highlights include include Daytona Bike Week from March 6th-13th and the Sturgis Motorcycle Rally from August 5th – 12th. Shows in thirteen states have been announced so far with one local date - July 31st in Long Branch.

On the new album, Matt and Eryn O'Ree are joined by singer Layonne Holmes, keyboardist Matt Wade, drummer John Hummel and bass guitarist Lex Lehman on the recorded tracks. The album ushers in a new era for the band while still keeping to their blues and rock sound. This is the first project that was co-written and produced by Matt O'Ree and Eryn together with Eryn singing vocals on half of the album's songs.

All of the band members have had a hand in crafting the upcoming record.

Matt and Eryn are both veterans of the Jersey Shore music scene who each had great solo careers before teaming up on stage. Matt is  a veteran on the blues-rock scene. Gaining national exposure in 2006, he won the Guitar Center King of the Blues Award, at Guitarmageddon, hosted by BB King and John Mayer. O'Ree joined Bon Jovi as a guitarist on the 2015 Bon Jovi Live! Southeast Asian tour. Then in 2016, O'Ree was inducted into the NY/NJ Blues Hall of Fame along with his wife, Eryn.

Eryn has won awards such as the BELK Southern Musician Showcase/Blues Artist as well as Asbury Park's Top Female Vocalist and Top Blues Band. She is also the youngest artist to be inducted into the NJ/NY Blues Hall of Fame and one of only three females who have been inducted. She has performed with or opened for artists such as Don McLean, Gregg Allman, Johnny Winter, Robert Cray, Dr. John, Shemekia Copeland, The Gin Blossoms, Little River Band, Marcia Ball, Walter Wolfman Washington, Eric Lindell, Sonny Landreth, The Radiators, Johnny A and so many more. She also sang backup vocals with the Smashing Pumpkins on the Late Show with Stephen Colbert.