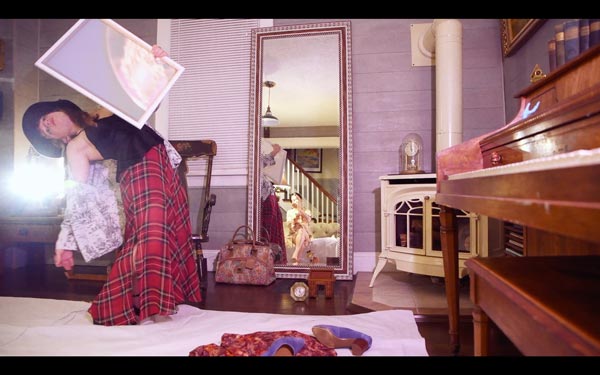 Mise En Abyme is a short experimental animation film by Charly Santagado that will be playing at the New Jersey Film Festival on Friday, January 28, 2022. The entire film is set in one room where two women interact with each other in a very specific way. One of the women is an artist that appears to be using the other as her muse, while the other woman [the muse] is only visible to the audience by way of reflection; there is a mirror placed next to the artist that acts as a window into what the woman across from her is doing.

This is a very particular film that seems to be interested in forcing its’ audience to question pretty much everything. Some of the questions I had while watching were: What does the artist want her muse to do? What can the muse do to inspire the artist? Who is the muse? Is she even a muse? The only sound that can be heard is an instrumental tune playing on loop that sounds similar to something you would hear at a circus. The lack of verbal communication between the two actors forces the audience to come up with our own relations as to how the visual information is being presented to us.

Another question I had while watching was “what is this film trying to say?” and that’s only because I ask myself that same question about pretty much every piece of media that I consume. However, this short film is unlike anything I’ve ever seen before. The answer to that question does not only lie in the interactions between actors, but in every single aspect of the scene as well. Santagado uses everything from the piano that is out of focus, to the Mona Lisa painting above the artists desk, and even the music being played on loop [that seems to be progressing with the scene] as crucial components that all tell different parts of this particular story.

Something that I tried to use to help answer the age-old question of ‘what does it all mean?!’ was to focus on a part of the film when the Mona Lisa painting was being manipulated. It was done in such a way that I hadn’t much time to figure out what was happening. This is interesting to me because it forces the viewer to pay close attention to a scene that is forever changing. While all of Mise En Abyme takes place in one room, it is somehow in constant motion. Even in the milliseconds where all objects in the room are stationary, there is a constant fire burning in a fireplace in the corner.

One last thing that I think should be taken into consideration when watching this film are the stairs that are being reflected in the mirror. The fact that they are only visible to us through the mirror shows us that the space that these two women have access to in this scene is actually much larger than we may think, all while keeping us at arms-length.

Each time that this film is watched, it is likely that the viewer will notice something that they hadn’t before and that concept in itself is interesting. It seems to be a sort of commentary on the things we miss out on [even in the most intimate of spaces] if we aren’t paying close enough attention. Watch Mise En Abyme and see for yourself what you can find.

Here is the EBTV Interview Professor Al Nigrin did with Charly Santagado to support the screening of Mise En Abyme at the Spring 2022 New Jersey Film Festival.

Mise En Abyme screens at the Spring 2022 New Jersey Film Festival on January 28 as part of the Experimental Film Program! To buy tickets to see it click here.