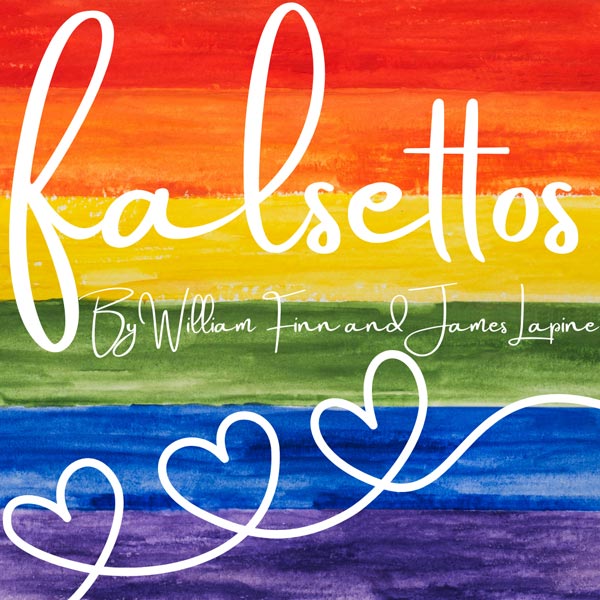 (HADDON TOWNSHIP, NJ) -- The Ritz Theatre Company presents its first musical production of 2022, Falsettos, a hilarious and achingly poignant look at the infinite possibilities that make up a modern family, written by William Finn and James Lapine. The show runs at The Ritz from January 14th through January 30th.

“This season, I believe, embodies our company’s commitment to diversity and inclusion more than any season we’ve previously presented,” says Producing Artistic Director Bruce A. Curless. “This musical is a piece of LGBTQ+ history. It takes place during a time when AIDS threatened the existence and emotional state of various communities.”

A seamless pairing of March of the Falsettos and Falsettoland, two acclaimed Off-Broadway musicals written nearly a decade apart, Falsettos is the tale of a neurotic New Yorker named Marvin, who leaves his wife Trina and young son Jason to live with his lover, Whizzer. In time, Trina marries his psychiatrist, Whizzer leaves him, and Marvin ends up alone. Two years later, Marvin and Whizzer reunite on the eve of Jason’s bar mitzvah, just as AIDS is beginning its insidious spread. With the help of their neighbors, Dr. Charlotte and Cordelia, Marvin and his entire family learn to grow up and face their future with love and dignity, conveying to the audience, in turn, that “love can tell a million stories.”

“The show examines a family that doesn’t fit the ‘prototypical’ structure of an American household,” says Mr. Curless. “It is a musical about love and acceptance, a story that teaches us to look at things through a different lens—and to listen to and learn what the universe is saying to us.”

Falsettos premiered on Broadway at the John Golden Theatre in 1992, under the direction of James Lapine, and went on to win two Tony Awards, for Best Original Score and for Best Book of a Musical. March of the Falsettos, Falsettoland and an earlier chapter in the story of Marvin, In Trousers, all premiered separately at Playwrights Horizons Off-Broadway. In 2016, a revival production opened on Broadway at the Walter Kerr Theatre, again directed by James Lapine.

At the helm for this Ritz production of Falsettos is director Al Fuchs, who has been involved at The Ritz both on and off the stage for the past 30 years. Joining Mr. Fuchs on this project are music director André Vermeulen, choreographer Jenn Colleluori, costumer Mandi Chiaro, set and lighting designer Matthew Weil, sound engineer Matthew Gallagher, and stage manager David Mooney-Todd. In terms of the cast, the production features John Baccaro as Marvin, Erica Scanlon Harr as Trina, Thomas Smith as Whizzer, Craig Hutchings as Mendel, Corey Apelt as Jason, Missy Baldino-O’Brien as Dr. Charlotte, and Jodi Lawrence O’Connor as Cordelia. All are extremely excited to bring this hilarious, heartbreaking, and utterly unique musical to life on the Ritz stage to kick off the New Year.

Performances take place Fridays and Saturdays at 8:00pm, and Sundays at 2:00pm. Tickets are: General Admission — $30; Artist/Student Rush — $15. Tickets are available for purchase online, over the phone, and at the box office.

**Please be advised that all audience members ages 5 and up will be required to show proof that they are fully vaccinated against COVID-19 when entering The Ritz. Full vaccination status means that, on the date of the performance, a guest is at least 14 days removed from their second dose of an approved two-dose COVID-19 vaccine OR at least 14 days removed from their sole dose of an approved single-dose COVID-19 vaccine. Exceptions will be made for unvaccinated individuals who bring ONE of the following items upon arriving at the theater: (1) A negative COVID-19 PCR test performed by a medical provider within 72 hours of the performance start time. (2) A negative COVID-19 rapid antigen test taken within 6 hours of the performance start time. The test results must clearly show the date and time of the test. Children under the age of 5 are exempt from the aforementioned vaccination/test result requirements. Masks will continue to be required for all audience and staff members inside the theater, except while actively eating or drinking.**