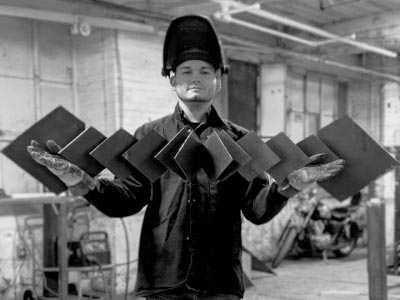 
Join us for a Walk + Talk with the artist and curator of the current exhibition in The Herb + Milly Iris Gallery. Gain a deeper understanding of these “metal origami” works through a guided exploration of the display. This event is free and open to all.

It’s the 10th anniversary of The Herb + Milly Iris Gallery! Through January 30, please consider donating to the Iris Gallery in support of this special milestone.

The Herb + Milly Iris Gallery at SOPAC celebrates its 10th anniversary with a special exhibition. “L’Dor V’Dor: Carrying the Torch” by Jeremy Iris-Williams (Herb and Milly’s grandson) is the first metal art exhibition by this emerging artist.

L’dor V’dor is a Hebrew expression meaning “from generation to generation.” This phrase encapsulates the notion of honoring one’s predecessors by passing on wisdom, traditions and stories.

The Iris family perfectly embodies the significance of this expression.

Milly established the Iris Gallery in 2011 to honor her late husband, Herb. Once Milly passed in 2014, the couple’s daughters, Roreé and Kerry, honored their parents through continued support of the Iris Gallery. Now, Roreé’s son Jeremy is exhibiting in the art Gallery.

“Jeremy Iris-Williams is a torch bearer, both figuratively and literally,” says Iris Gallery curator Jeremy Moss. “He continues the creative lineage of his Nona, Milly Iris, who inspired him to become the artist he is today.”

Milly was a pioneer of the American crafts movement, opening a one-of-a-kind crafts gallery, Whichcraft Studio, in South Orange in 1970. Later, Milly served on the first SOPAC Board of Governors, which was responsible for cultivating the vision for SOPAC. A steadfast believer in “living with art,” Milly passed that passion for creativity on to her grandson, Jeremy. She fostered his curiosity in the arts and encouraged him to pursue his talents. She encouraged him, challenged him, and most importantly, believed in him.

Ten years ago, in celebration of Milly’s 80th birthday, Jeremy unveiled his first sculpture— a large, striking wooden piece—at SOPAC. Six years later, Jeremy enrolled in the University of the Arts in Philadelphia. His application concluded with a heartfelt dedication “…in honor of Nona, who made me believe I could be an artist.”

In college, Jeremy quickly discovered a talent and affinity for metal sculpture and immersed himself in welding and metal fabrication. Most of Jeremy’s work is abstract and unpredictable. He is interested in using metal in unexpected ways.

“I see a sheet of steel as my blank canvas,” says Jeremy Iris-Williams. “There are no rules or restrictions. I have full freedom to think and create. With my metalworking, the possibilities are endless.”

About two dozen of his pieces are on view in “L’Dor V’Dor: Carrying the Torch.” These works were created in the artist’s Kensington, Philadelphia studio over the last year and a half.

“I would describe them as ‘metal origami’ with a twist,” says curator Jeremy Moss. “Whether they be decorative or functional, his sculptures are fascinating, thought provoking and elegant.”

Milly fueled her grandson’s creative flame and Jeremy is proud to “carry the torch.” His return to The Herb + Milly Iris Gallery honors his Nona and recognizes the ways in which art binds people together. May their intergenerational bond and dedication to the arts inspire a creative spark in other’s lives.