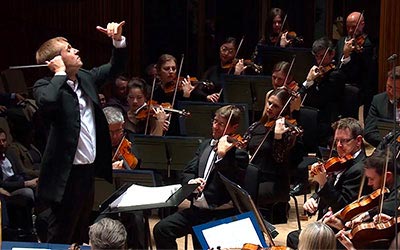 The Royal Philharmonic Orchestra (RPO)—celebrating its 75th anniversary this year—performs 200 concerts each season to a worldwide audience of more than half-a-million people. The RPO embraces a broad repertoire that enables it to reach the most diverse audience of any British symphony orchestra. The RPO collaborates with the most inspiring artists, including its new Music Director, Vasily Petrenko, who will be leading the RPO for this STNJ performance. The program includes Four Sea Interludes from Benjamin Britten’s opera, Peter Grimes; Symphonic Dances, Rachmaninoff's last major composition; and Shostakovich's Cello Concerto No. 1 in C Minor, Op. 35, performed with cello soloist, Kian Soltani.

The 42-year-old Russian conductor, Vasily Petrenko, began his tenure as the Music Director of the RPO in August 2021. His appointment stands as a major landmark in the Orchestra’s history, signaling its determination to broaden the audience for orchestral music while enhancing its reputation as one of the world’s most versatile ensembles.

Described by Gramophone as “sheer perfection,” cellist Kian Soltani’s playing is characterized by a depth of expression and technical mastery, alongside a charismatic stage presence, and ability to create an immediate emotional connection with his audience. Rave reviews and invitations to perform at the world's leading concert halls have propelled the 25-year-old musician from rising star to one of the most talked about cellists performing today. Kian Soltani made his international breakthrough at the age of 19 with acclaimed debuts in the Vienna Musikverein's Goldener Saal and at the Hohenems Schubertiade.