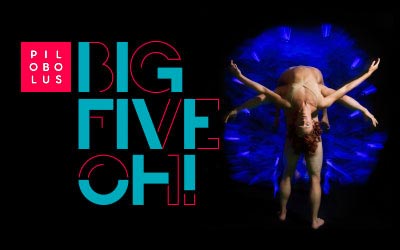 This show is part of STATE THEATRE NEW JERSEY’S CENTENNIAL SERIES, celebrating our 100th Anniversary in the newly renovated theater! Learn more about the renovations and other Centennial Series shows here »

For its 50th anniversary celebration, internationally renowned dance company Pilobolus questions its own “givens,” turns its traditions sideways, and brings its past into the future—in a thoroughly engaging new way. As fresh and vibrant as ever, Pilobolus puts the “Oh!” in BIG FIVE-OH!, and continues to morph its way thrillingly into audiences’ hearts and minds. The program includes the vintage classic, Untitled; the high-voltage Megawatt; signature shadow works; and a few concepts that have never been seen before!

For 50 years, Pilobolus have tested the limits of human physicality, exploring the power of connected bodies. The group performs internationally for 300,000+ people each year and creates custom performances, digital content, movement experiments, and live events. You've seen them at the Oscars, the VMAs, and the Olympics, and they've collaborated with OK Go, the NFL, Hyundai, RadioLab, Penn & Teller, and more. Honors include a TED Fellowship, a Grammy® Nomination, a Primetime Emmy® Award, and several Cannes Lion Awards.