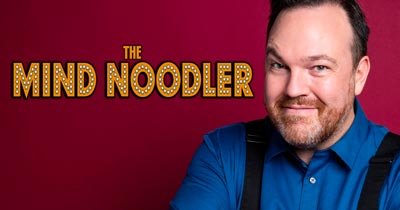 The Las Vegas Review Journal recently named Matt Donnelly, “Las Vegas’s Best Up and Coming Comedy Magician”. His act, The Mind Noodler has been dazzling audiences across the North America with his unique and hilarious brand of magic and one of a kind story. Many years ago while working as head writer on Penn & Teller Fool Us, Penn Jillette challenged Matt to learn one trick. He said “It’s harder that you think…but you might be better at it than you think”. So he did learn one trick…from 7 different magicians! He put all 7 tricks together and made his first show.

Matt spent years on tour opening for “Piff The Magic Dragon” with his unique take on magic. Now, he tours with his own Mind Noodling show, amazing audiences across North America at prestigious magic venues like LA’s Magic Castle, The Chicago Magic Lounge, and Nashville’s House of Cards while also headlining at the Second Bell Comedy Festival in Tennessee. Offstage. Matt is the cohost’s of Penn Jillette’s award winning podcast, Penn’s Sunday School as well as magic podcast, Abracababble and just wrapped his 9th season as head writer of Fool Us for the CW.

Long before he ever thought of dipping his toes into magic, Matt crushed the Las Vegas comedy world. He played the Las Vegas strip alongside Wayne Brady in the smash-hit improv comedy show “Making It Up” at the Venetian, he played Christian Grey in the ridiculously funny “50 Shades the Parody” at Bally’s, and he hosted the innovative and hilarious show, “Executive Monkeys” at The Palms.