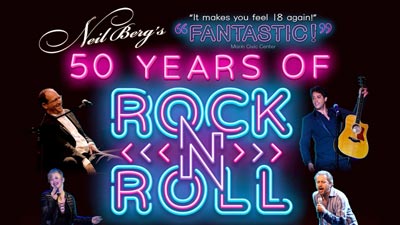 With a cast consisting of both stars from Broadway’s greatest rock musicals, as well as incredible Rock & Roll singers, Neil Berg shares the often unknown stories from the fifty-year history of the music that changed the world forever!

Neil Berg is the composer/co-lyricist of the HENRY award-winning, Broadway-bound musical THE 12, written with Pulitzer Prize/Tony-winning playwright, Robert Schenkkan, which premiered at The Denver Center. He also composed Grumpy Old Men: The Musical, which opened to rave reviews for its U.S. Premieres at The Ogunquit Playhouse in Maine, and La Mirada Theatre in LA, and can now be seen all across the country. His other musicals include the hit Off-Broadway musical The Prince and the Pauper, Tim and Scrooge, which ran at the Westchester Broadway Theatre in NY, Never Grimm, and The Man Who Would Be King. Neil is the creator/co-producer of the #1 Broadway touring concert in America, Neil Berg’s 100 Years of Broadway, as well as Neil Berg’s 50 Years of Rock & Roll and Neil Berg’s Pianomen. He is the co-producer of the Off-Broadway Alliance Award-Winning revival of Closer Than Ever.