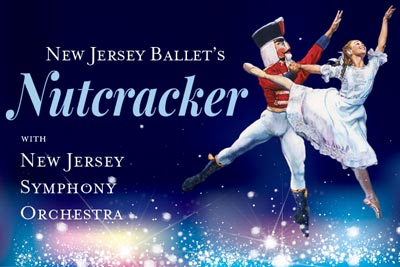 This year marks the 50th anniversary of New Jersey Ballet’s Nutcracker, making it the longest running original professional production in the state. The production debuted in Millburn in 1971 with international star of New York City Ballet Edward Villella as the Cavalier. Since then, the company has given approximately 800 performances in theatres throughout New Jersey, with more than 5,000 dancers and children, and over a million viewers. Many in the audience who saw the production as children now bring their own children and grandchildren to see this cherished holiday tradition.

New Jersey Ballet’s Nutcracker at MPAC will feature the New Jersey Symphony Orchestra under the baton of Gary S. Fagin. When the curtain rises, audiences in Morristown can expect the eye-popping special effects, brilliant dancing, glorious costumes, and the magic and pantomime that has inspired critics to call it “A spectacle that never seems to age…magic that should go on and on,” and “One of the best…as good as it gets.”

About THE NEW JERSEY SYMPHONY ORCHESTRA

Named “a vital, artistically significant musical organization” by The Wall Street Journal, the New Jersey Symphony Orchestra embodies that vitality through its statewide presence and critically acclaimed performances, education partnerships and unparalleled access to music and the Orchestra’s superb musicians. Since 2016 NJSO has been under the direction of Music Director Xian Zhang. The Orchestra presents classical, pops and family programs, as well as outdoor summer concerts and special events. Embracing its legacy as a statewide orchestra, the NJSO is the resident orchestra of the New Jersey Performing Arts Center in Newark and regularly performs at the State Theatre in New Brunswick, Count Basie Theatre in Red Bank, Richardson Auditorium in Princeton, Mayo Performing Arts Center in Morristown and bergenPAC in Englewood. Partnerships with New Jersey arts organizations, universities and civic organizations remain a key element of the Orchestra’s statewide identity. In addition to its lauded artistic programming, the NJSO presents a suite of education and community engagement programs that promote meaningful, lifelong engagement with live music. For more information about the NJSO, visit www.njsymphony.org.