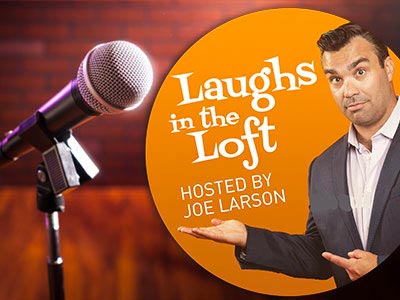 Join us for Laughs in the Loft, a monthly series featuring stand-up comics from our own backyard, Brooklyn and beyond. You never know who might drop in!

Each Laughs in the Loft event features several comedians in a New York City-style showcase. The talent is announced approximately two weeks prior to each show.

“A comedy cure for the midweek blues”

Intended for mature audiences. Recommended for ages 18 and up.

Lineup up for Wednesday, December 14

LeClerc Andre– LeClerc Andre was first featured at Just for Laughs Comedy Festival as one of the New Faces of Comedy. This appearance quickly spring-boarded him into his TV network debut on The Tonight Show Starring Jimmy Fallon in October of 2018, as well as on NBC’s Bring the Funny in 2019.

Ayanna Dookie– Ayanna Dookie is not only a hilarious comedian, but she also has the absolute craziest dating story ever (Google it!) Ayanna has been also seen on NBC, Comedy Central, Gotham Comedy Live and 2 Dope Queens Podcast.