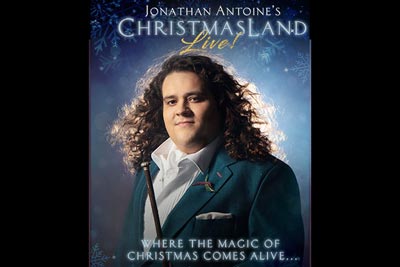 Chart-topping  British Tenor, Jonathan Antoine is putting the finishing touches on his highly anticipated new Holiday Collection, ChristmasLand Platinum Edition.  The project will be released on November 19th via Loki Recordings.  Following the release of the new album, Jonathan is set to perform a run of shows with several dates in North America beginning on December 1st and running through December 23rd. Jonathan said “I have missed you all so dearly. For almost the last 2 years I have taken every opportunity to avoid human contact in the midst of a global pandemic but each of you have occupied every free moment in my thoughts, and there have been quite some free moments. I am more excited to see you and perform for you than I could possibly explain to you in the simple communication method of mere words – I hope to let the music do the talking. I’ll see you there, be safe until then.”

Late last year Jonathan released two singles off his first Holiday Album,  a stunning version of ‘Amazing Grace’ which eloquently demonstrated Jonathan’s extraordinary vocal mastery and can be heard here and viewed here, as well as an exquisite recording of  ‘These Are The Special Times (Momenti Splendidi)’ which can be heard here and viewed here. The song was originally recorded by Celine Dion in 1998 and was especially rewritten for Jonathan by legendary American songwriter Diane Warren, and features a remarkable new Italian lyric by Grammy nominated composer Marco Marinangeli.

In late 2020, following the release of the original ChristmasLand, Jonathan performed an intimate virtual concert from the Union Chapel in London. The joyful event was a huge success that was streamed across three different time zones and included  a unique  live virtual Q&A with Jonathan directly after the show.

Reflecting on the holiday season, Jonathan says “I have had the luck to spend the last 26 Christmases with my family, surrounded by people who love me. It has been a constant throughout my life, and I feel equally as excitable about it now as I did 20 years ago.   Christmas doesn’t just mean Christmas, it also means every other day of the year. Please remember this as we move forward, and treat every day as though it were Christmas – perhaps we can all meet in ChristmasLand.”

ChristmasLand Platinum Edition includes a magnificent selection of universally beloved Christmas classics, promising to be a family favourite during the festive season and for years to come.  The album is Jonathan’s second 2021 release,  the first was a reimagined version of Diane Warren’s 2021 Academy Award®-nominated and Golden Globe®-winning song, “Io Sì (Seen)”  from Netflix’s 2020 film, The Life Ahead. Enjoy the video, here. In August of 2020 he released Lieder, an EP featuring 4 operatic pieces including Nessun Dorma from Turandot. The aria was popularised by Luciano Pavarotti, to whom Jonathan has often been compared.

Jonathan became a global sensation at the age of 17 following an astounding performance on Britain’s Got Talent, which went on to become the world’s most viewed television audition of any performer in history. He later released two best-selling albums with his singing partner, Charlotte Jaconelli, before going on to have further success as a solo artist and becoming the youngest tenor to achieve a #1 classical album.

An outspoken supporter and ambassador for the rights and well-being of young people, Jonathan co-authored a published children’s book, “Jonathan the Porcupine” helping children to overcome the effects of bullying, and is also featured in the upcoming documentary Anxious Nation.