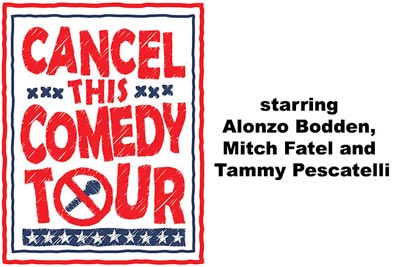 A brand new comedy tour that is going to bring back the number one and seemingly forgotten rule of comedy, be funny! Outspoken and un-cancelable veteran comedians Alonzo Bodden, Mitch Fatel and Tammy Pescatelli take on cancel culture without politics, race or religion getting in the way! Laugh-it’s just jokes!

A regular panel member on NPR’s Wait Wait…Don’t Tell Me, Alonzo Bodden has been making audiences around the country laugh for more than 20 years.

In August 2019, Alonzo starred in his fourth stand-up special, Alonzo Bodden: Heavy Lightweight, which premiered exclusively on Amazon Prime Video. In the special, he touches upon a range of topics from slavery, cell phones and the #MeToo movement, to millennials, Kanye West and Taco Bell.

Alonzo’s first big comedy break came when he was on the “New Faces of Comedy” showcase at the Just for Laughs Festival in Montreal. However, it was as the season three winner of NBCʼs Last Comic Standing, where Alonzo was first introduced to America. Since then, he has starred in two comedy specials for Showtime: Historically Incorrect and Who’s Paying Attention. His television appearances include ABC’s Dr. Ken and Fresh Off the Boat, Dr. Phil, The Tonight Show with Jay Leno, Late Night with Conan O’Brien, Comedy Central’s The Nightly Show with Larry Wilmore and Californication.

A car and motorcycle aficionado, Alonzo hosted Speed Channel’s 101 Cars You Must Drive and America’s Worst Driver on the Travel Channel. He’s also joined Jay Leno for several off-road trips on his CNBC series Jay Leno’s Garage. Alonzo was a field correspondent on Animal Nation with Anthony Anderson, and a contributor on the Science Channel’s How to Build Everything.

Alonzo released his fifth comedy CD titled Man Overboard in 2018. He currently hosts the podcast Who’s Paying Attention? (part of All Things Comedy) where he gives his unique take on what’s going on in the world.

Is that a sparkle in his eye or is he just confused? With his innocence and friendly demeanor mitch quickly engages the audience and then catches them off guard with his mixture of mischievous dialog and off color comments. While laughing at observations only mitch can get away with we are left wondering if he truly understands what he just said. We never really know.

Mitch has been showcasing his talent to rave reviews for the past 15 years. Since then both appreciative audiences and comedy executives have made the same observation about Mitch零 rise to stardom, “It’s just a matter of time.” Well his time has come. The number one requested comedian on Satellite Radio, Mitch has appeared numerous times on both the “Late Show with David Letterman” and the “Tonight Show with Jay Leno”. In 2006 he took home honors as “Best Comedian” at the prestigious HBO Aspen Comedy Festival and in April of 2007 his half hour stand up special debuted on Comedy Central and was ranked #6 all time by viewers. Mitch’s’ new DVD “Magical” will be debuting in September 2009 which will be tied in to his first one hour special on Comedy Central. Catch this innovative comedian, clearly about to make the jump to bona fide Superstar, while you still can.

Arguably one of the hardest working women in comedy today, Tammy Pescatelli brings brassy sexiness with a bold voice of witty sarcasm to her audiences, holding her own on the topics of sports, television, dating and family life using tongue-in-cheek humor. She is relatable to every audience member-male & female. After seeing Tammy perform, nearly everyone wishes she was their best friend or sister!

“Tammy Pescatelli’s :Way After School Special”, her new special, is a highly anticipated follow up to Tammy’s award winning one hour Netﬂix (now both on Amazon Prime) special, “Finding the Funny.”

Tammy appeared on the highly acclaimed Showtime Comedy Special, “Women Of A Certain Age 2”.  Recently, she had a guest star role on “Blue Bloods” and was also chosen to be one of the few hosts of a new network, Circle TV’s standup show called “Standup Nashville: Live From Zanies”.

The clip from Tammy’s appearance on the “Just For Laugh’s Gala with Sebastian Maniscalco”, continues to climb in views on the JFL Facebook and Youtube page garnering close to 50 million views collectively. Signed to Git R’ Done Records, Larry the Cable Guy’s label, Tammy took funny back in time with her successful album release, “#TBT: THROWBACK TAMMY”. #TBT debuted at the coveted number 2 spot on the iTunes and is in continuous play on SiriusXM, Pandora and many others.

Tammy has had recent big appearances on The View, Guy’s Grocery Games:Comics Compete and The Howard Stern Show and her being chosen by Jenny McCarthy & Donnie Wahlberg to be a part of their Dirty, Sexy, Funny franchise that included a hilarious all-female slate of standup comedians comedy special on EPIX/ Hulu, a touring show and a pilot for A&E.

With a slew of other accolades under her belt – including co- creating, executive producing, writing and starring in her own reality show, A Stand-Up Mother, on the WeTV Network – Tammy has appeared on a number of television shows like The Tonight Show with Jay Leno (4x), A&E’s Donnie Loves Jenny(twice), Bravo’s Rocco’s Dinner Party, CBS’s The Talk, NBC’s Last Comic Standing: The Best of the Best, her own Comedy Central Present Special that won that year’s Comedy Central’s Standup Showdown, and many, many more. Tammy’s career jumpstarted after appearing – and being one of the Final 5 – on NBC’s Last Comic Standing. Her season played out to more than 18 million viewers, garnering her a mass of loyal new fans that found themselves alongside the others she had created by years of touring the comedy clubs.

It solidiﬁed her as one of the sharpest comics in the comedy world!

Pescatelli also guested a number of times on the syndicated Comics Unleashed show and was chosen for their “Best of the Best” that was a world-wide top selling DVD. Internationally she also was featured on the Best of the Just For Laughs, in Montreal, Quebec Canada and The World Stands Up & The Laugh Factory in Europe and Australia.

Tammy recently starred as the ﬂawed, yet lovable lead in in “That’s Amore”- an independent “grown up rom-com” that is available Amazon Prime. Her ﬁlm credits include: Made in Brooklyn, I Am Battle Comic, Single: A Documentary Film and Everybody Wants to Be Italian. Also a regular on USO Comedy tours, Tammy is honored and humbled to have been privileged to have entertained our troops all over the world.

She currently continues to tour and sell-out shows around the country.