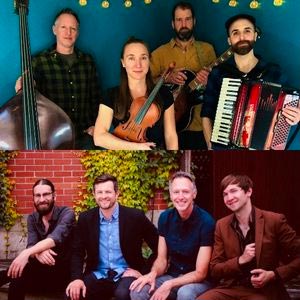 Pyrenesia is an acoustic swing quartet founded on the banks of the Delaware River, combining original compositions and singer-songwriter melodies with the Django Reinhardt-inspired tradition of gypsy jazz.

Pyrenesia and Alex Radus are bringing their combined musical talent to Hopewell Theater this December.

Day of Show Ticket Price: $30 plus taxes and fees

Pyrensia has performed at some of the area’s top venues and their album “Off-Beat Symphony” was named one of 2019’s top ten albums by NJ Spotlight. Prolific composers and performers, Pyrenesia released a follow-up EP “On and On” in 2021 and continues to deliver foot-stomping, dress-swirling, hand-clapping experiences to lift spirits and transport listeners to a musical landscape as vast as the Pyrenees mountains are high.

Alex Radus has toured the country extensively, recorded multiple albums, and earned awards, nominations, and critical acclaim for his songwriting, recording, and performing. Radus’ music has been featured on radio, TV, and film, including Adolescence, directed by Ashley Avis (Black Beauty). A staple of the eastern PA music scene, Radus is a frequent performer at the region’s best festivals and venues, including Musikfest, Zoellner Arts Center, Godfrey Daniels, Steelstacks, Hopewell Theater, World Cafe Live, and more.