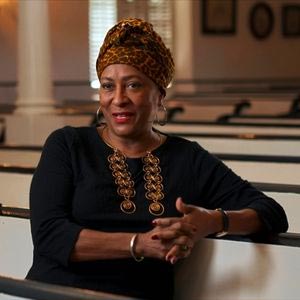 New Jersey, the Garden State, is known for its produce, but not for the enslaved people who tilled the soil. In this two-part documentary, descendants and historians tell their stories and why it was the last northern state to end the institution of slavery.

Dessert will be served at an intermission between the two episodes of The Price of Silence, included with every ticket. Dessert details to come.

Stick around after the film for a panel discussion with filmmaker Ridgeley Hutchinson, authors Beverly Mills and Elaine Buck (If These Stones Could Talk), Isabela Morales, Kristal Langford, and Danielia Cotton.

Watch the forgotten story of New Jersey's enslaved people in the two-part documentary that aired on NJ PBS, The Price of Silence: The Forgotten Story of New Jersey’s Enslaved People, followed by dessert and a panel discussion with filmmaker Ridgeley Hutchinson, co-authors Beverly Mills and Elaine Buck (If These Stones Could Talk), Isabela Morales, Kristan Langford, and international singer-songwriter Danielia Cotton.

Part One of the film offers an overview of the state’s history of enslaved people and shares the poignant family stories of its earliest freed slaves.

Part Two looks at the Lost Souls Project, which is working to remember and identify African Americans who were forcibly removed from New Jersey and taken to Louisiana, and explores the lasting impact of slavery in the state. It also interviews Hopewell singer Danielia Cotton, who discusses her journey as an African American entertainer.

Enslavement was prolific from the very founding of New Jersey in the 1600s as a colony and eventual manufacturing hub that supplied southern states with leather goods and other products. Its eye on production and profit created a demand for the cost-effective services of the enslaved, a demand that only grew as New Jersey developed into a major maritime port.

The film treks across New Jersey to bring stories of the enslaved to life, from the Harriet Tubman Museum in Cape May and the Stoutsburg Cemetery in Mercer County to the Bainbridge House at Princeton University, Perth Amboy where slave ships docked, and Hopewell, an area where Black families were among its founders.

“I never learned about this in school,” says Beverly Mills, author of If These Stones Could Talk, regarding the history of slavery in New Jersey. “If anything, we were taught to feel shame. And today… I feel nothing but pride and I feel empowered.”