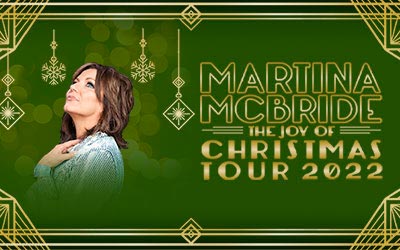 See country superstar Martina McBride live this holiday season in The Joy of Christmas Tour 2022! Enjoy hits like “Independence Day,” “A Broken Wing,” “Wild Angels,” and “This One’s for the Girls” along with holiday favorites.

The multiple Grammy® nominee has sold over 23 million albums to date, which includes 20 Top 10 singles and six #1 hits. McBride has earned more than 15 major music awards, including four wins for Female Vocalist of the Year from the Country Music Association and three Academy of Country Music Awards for Top Female Vocalist. She has been awarded 14 Gold Records, nine Platinum honors, three Double Platinum Records, and two Triple Platinum Awards.

McBride was awarded the Covenant House Beacon of Hope Award and Music Business Association’s prestigious 2015 Harry Chapin Memorial Humanitarian Award for her philanthropic efforts on behalf of domestic violence. She has released two cookbooks—the first, Around the Table, a full-color illustrated collection of her favorite recipes, hosting tips, practical menu planning advice, and themed décor inspiration. She released her second book, Martina’s Kitchen Mix: My Recipe Playlist for Real Life, in October 2018. Most recently, McBride was honored with the Cliffie Stone Icon Award at the ACM Honors event for her impactful contributions to country music.

When McBride isn’t in the studio, she focuses her time on charitable causes dear to her heart through her Team Music Is Love charity initiative.