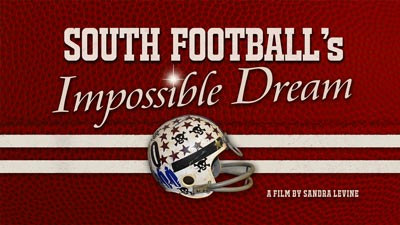 South Football’s Impossible Dream explores the rise to glory of a team that competed in an epic battle known at the Jersey Shore as “The Greatest Game Ever Played.” On a bitter cold day in November 1969, No. 1 ranked Toms River High School South faced No. 2 ranked Middletown High School before thousands of fans for a mythical state championship. Rare film footage from the game will be shown publicly for the first time.

The film uncovers the techniques used by former Toms River South Head Coach, Ron Signorino, Sr., in the 1960s, to turn a losing football program into a powerhouse that racked up a 19-game winning streak. Coach Signorino is a local legend known for his deep understanding of the game, his ability to motivate his players, and his knack for analyzing game films to better understand his opponents.

Years later, his son, Ron Signorino, Jr., became head coach at the same high school in Toms River. The film examines the Signorino family’s deep passion for the sport, as the third generation takes the helm.

Archival photographs and film footage combine with interviews with coaches, former players, and sports insiders to create captivating stories about Coach Signorino, Sr. and Hitting Indians Football. Alumni speak about the influence he had on their lives, and how their relationships continue more than 50 years later.

The film is produced by Sandra Levine Productions. Company founder, Sandra Levine, a Toms River native, was a producer at NJN Public Television (PBS) for 23 years. Her work has been nominated 10 times for regional Emmy Awards. She also was the host of The Best Years on Ocean County College’s television station.