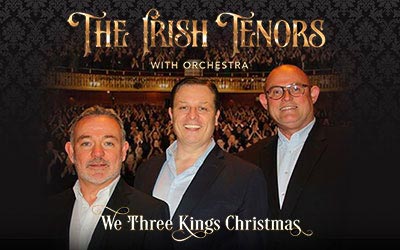 See the beloved group The Irish Tenors live in a Christmas concert with a full orchestra! The evening will feature holiday favorites such as "I’ll Be Home for Christmas," "Hark the Herald Angels Sing," "Winter Wonderland," "White Christmas," and more. Other songs in the program include "Danny Boy," "When Irish Eyes Are Smiling," "Toorah Loorah," and all the classic Irish songs for which they are known.

The Irish Tenors have been the acknowledged Celtic music kings since they burst upon the scene during a 1998 special. With 10 best-selling CDs to their credit, they share company with the likes of The Three Tenors and Andrea Bocelli as the biggest money makers PBS has presented. The Irish Tenors rekindled the love of all things Irish in America, and opened the door for countless Irish music groups to hit the United States.

The Irish Tenors have performed all over the world, including the best venues in America, from Radio City Music Hall, Madison Square Garden, and Carnegie Hall to The Hollywood Bowl in California—they have blazed a trail from coast to coast stopping in nearly every city in between; thrilling audiences at every single stop with their enchanting Irish repertoire, sweeping secular selections, and dynamic holiday fare.