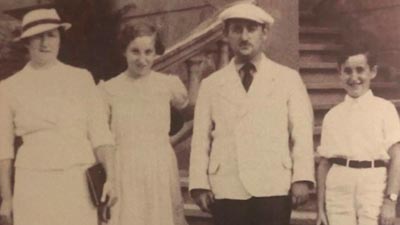 At age 12, Fred Behrend’s life was ripped apart. He was living 65 miles from home with the family of Cantor Max Baum so he could attend a secular Jewish school after the Nazis banned Jews from public school. In November 1938, he witnessed the horrors of Kristallnacht (Night of Broken Glass), seeing synagogue after synagogue torched in the city of Cologne. Fred did not know that back home, his father, like 30,000 other Jewish males, had been arrested for transport to a concentration camp. All Fred knew was that his idyllic time with the Baum family and his friend Henry was over. His mother frantically sent a car to pick him up. Fred’s family lost most of its material possessions. But they escaped to Cuba and, eventually, America. Fred would turn the tables in 1946 as an American GI. He was part of a little-known denazification initiative called the Intellectual Diversion program at a Virginia military base. Selected for his ability to speak German and his counterintelligence training, Fred was taught by elite professors to give crash courses to German POWs about American-style democracy. In his later years, Fred began to speak to schoolchildren about his Holocaust past. In 2018, he was speaking to students at a Jewish day school on the 80th anniversary of Kristallnacht about that fateful day and his friend Henry Baum. The head of the school left the room for 10 minutes and returned later holding a cellphone. He handed it to Fred. On the line was Henry Baum. Soon they would meet—in one more powerful victory over Hitler and the Nazis. 2022; 40 min.

This film was shot in the last days before the full-scale Russian-Ukrainian war. Natalia has been living in peaceful Kharkiv for a long time, she considers it her home. Her mother wants to return to Luhansk, which is occupied by militants, because she was born there. So Natalie makes her way to her native city to check on her parents' house. But the area is already strange to her. And not strange at the same time. In Ukrainian and Russian, subtitled. 2022; 15 min.

Saving Strays is a short documentary film about Lauren Dragun who details her emotional journey of saving stray cats. 2022; 10 min.