SINATRA: A MAN AND HIS MUSIC STARRING MICHAEL MARTOCCI 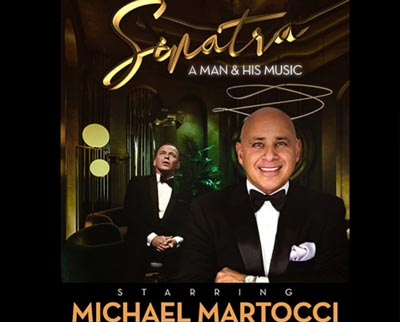 SINATRA A MAN AND HIS MUSIC

Sinatra A Man & His Music is a musical tribute to Frank Sinatra featuring a multi-media presentation celebrating Mr. Sinatra’s career. In this show, Michael will be debuting some of the original arrangements by Quincy Jones from the legendary album, Sinatra at the Sands with Count Basie & his Orchestra. These are one of a kind, never heard in public, arrangements as well as all the Sinatra Classics.  The show will also feature lots of photos and a never-before-seen video! Of course, all the iconic Sinatra hits take center stage in Sinatra A Man and his Music.

Opening the show will comedienne TAMMY PESCATELLI.  Arguably one of the hardest working women in comedy today, Tammy Pescatelli brings brassy sexiness with a bold voice of witty sarcasm to her audiences, holding her own on the topics of sports, television, dating and family life using tongue-in-cheek humor. She is relatable to every audience member-male & female. After seeing Tammy perform, nearly everyone wishes she was their best friend or sister!