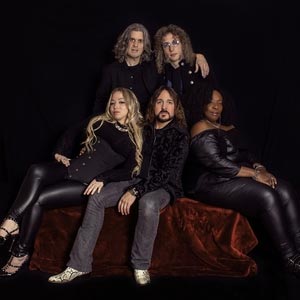 Over the past few years, The Matt O'Ree Band has done what most area bands do. They've played their shows, developed their sound, released their records and very quietly built a massive fan base in the process. What makes this band different from all the others is that their local fan base includes Bruce Springsteen, David Bryan, and Steve Cropper, all of whom have volunteered to perform on the band's album, Brotherhood.

Prior to Brotherhood's release, Matt's talent was recognized globally when he got the nod to join rock legends Bon Jovi as their guitarist/backing vocalist on their 2015 stadium tour of the Far East. When some of your biggest supporters have sold over 200 million units, you know you're doing something right.

In addition to being a creative songwriter, Matt O'Ree was recognized by the industry as a guitar great after winning a national guitar contest hosted by B.B. King and John Mayer through Guitar Center and Guitar World magazine. Matt beat out over 4,000 competitors to win the grand prize which consisted of multiple guitars, an endorsement from Gibson, a shopping spree at Guitar Center and a new car from Scion. This major accomplishment was the spark that jumpstarted his career and gave his band momentum for their future success.

Matt's writing is inspired by many life experiences and years of study from the ones that have written the book on how to play real guitar rock music. Not as a photocopy, but in a new light that hasn't been seen in quite some time. Now is the time for real music and real musicianship to make a resurrection.

Recently, the band has been promoting two new singles "Without You" and "Through Time With You" co-written and produced by John Ginty, B3 Organ player for the Allman Betts Band and the Dixie Chicks. The songs are an indication that the band is moving in a new direction forming a powerhouse team, blending Eryn's soulful vocals with Matt's gritty vocals and unparalleled guitar. Together these two front an incredible sound where the audience can feel the sparks between them. The chemistry on stage is unstoppable.

Eryn is an accomplished artist in her right. She won awards such as the BELK Southern Musician Showcase/Blues Artist as well as Asbury Park's Top Female Vocalist and Top Blues Band. She is also the youngest artist to be inducted into the NJ/NY Blues Hall of Fame and one of only three females who have been inducted. She has performed or opened for artists such as Don McLean, Gregg Allman, Johnny Winter, Robert Cray, Dr. John, Shemekia Copeland, The Gin Blossoms, Little River Band, Marcia Ball, Walter Wolfman Washington, Eric Lindell, Sonny Landreth, The Radiators, Johnny A and so many more. She also recently sang backup vocals with the Smashing Pumpkins on the Late Show with Stephen Colbert.

Together, the band takes their fans on a ride that hasn't been heard or seen at this level since the '70s. Their live show is like revisiting a Zeppelin concert at the Garden, and with Lex Lehman's smooth soulful bass, John Hummel's Bonham-esque drums, and Eryn's angelic and gutsy lead and backing vocals, Matt and company have built a foundation that can hold up the biggest house on the block.