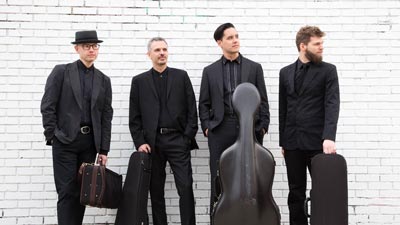 The idea of four core elements – Earth, Air, Fire, Water – as the physical world’s foundation was a shared belief across numerous ancient cultures, including those in Greece, Egypt, Persia, Babylonia, India, and beyond. In myriad combinations, these four elements were thought to be capable of both infinite creation and powerful destruction. In parallel, the unique musical ecosystem of the string quartet is a delicate balance of four unique human elements, collectively capable of voicing the profound beauties of our world as well as its potential for violent change.

In their latest project, Brooklyn Rider convenes a musical discussion trained on the future of our planet. In part a celebration of Earth’s wondrous mysteries, this project is more importantly designed to raise attention to the powerful forces of climate change which, taken together, represent the single greatest challenge of our time. Brooklyn Rider’s intrepid program concept, The Four Elements, gathers music either broadly representative of or directly inspired by the classical elements of earth, air, fire, water. Some of the works are drawn from the last one hundred years, a century marked by unprecedented planetary change, while others are newly commissioned scores penned by composers with unique global perspectives that more urgently reflect current realities and serve as a musical call to action.