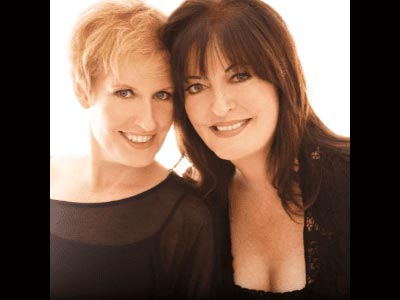 Ann Hampton Callaway is one of the leading champions of the Great American Songbook, having made her mark as a singer, pianist, composer, lyricist, arranger, actress, educator, TV host and producer. Voted recently by Broadwayworld.com as “Performer of the Year,” and “Best Jazz Vocalist” Callaway is a born entertainer. Her unique singing style blends Jazz and traditional Pop, making her a mainstay in concert halls, theaters and jazz clubs as well as in the recording studio, on television and in film. She is best known for her Tony-nominated performance in the hit Broadway musical Swing! and for writing and singing the theme song to the hit TV series “The Nanny.” Callaway is a Platinum Award-winning writer whose songs are featured on seven of Barbra Streisand’s recent CDs. She has also performed her award winning show “The Streisand Songbook” with over 100 symphonies. Her latest CD Jazz Goes To The Movies debuted at #12 on the Billboard Jazz chart.

Liz Callaway is a Tony nominee and Emmy Award-winning actress, singer and recording artist. She made her Broadway debut in Stephen Sondheim’s Merrily We Roll Along, received a Tony Award nomination for her performance in Baby, and for five years, won acclaim as Grizabella in Cats. She has also starred in the original casts of Miss Saigon, The Three Musketeers, and The Look of Love. Liz sang the Academy Award nominated song “Journey to the Past” in the animated feature Anastasia and is also the singing voice of Princess Jasmine in Disney’s Aladdin and the King of Thieves and The Return of Jafar. Other film work includes the singing voice of the title character in The Swan Princess, The Lion King 2: Simba’s Pride, Beauty and the Beast, Lyle, Lyle the Crocodile and The Brave Little Toaster Goes to Mars.