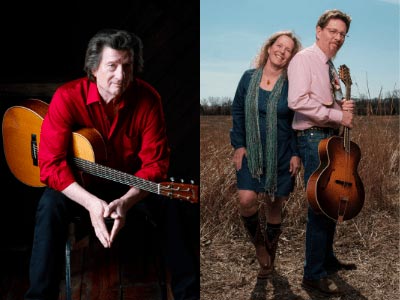 A master of acoustic Folk/Blues, Chris Smither creates a singular guitar sound – a beat-driven finger-picking, layered over his ever-present rhythmic, tapping feet (always mic’d in performance). A lifelong devotee of Bluegrass, Tim O’Brien is skilled on guitar, mandolin, fiddle and banjo. He often performs with his wife, vocalist Jan Fabricius.

Born in Miami, during World War II, Chris Smither grew up in New Orleans where he first started playing music as a child. The son of a Tulane University professor, he was taught the rudiments of instrumentation by his uncle on his mother’s ukulele. “Uncle Howard,” Smither says, “showed me that if you knew three chords, you could play a lot of the songs you heard on the radio. And if you knew four chords, you could pretty much rule the world.” With that bit of knowledge under his belt, he was hooked. “I’d loved acoustic music – specifically the Blues – ever since I first heard Lightnin’ Hopkins’ Blues In My Bottle album. I couldn’t believe the sound Hopkins got. At first I thought it was two guys playing guitar. My style, to a degree, came out of trying to imitate that sound I heard.”

In his early twenties, Smither turned his back on his anthropology studies and headed to Boston at the urging of legendary Folk singer Eric von Schmidt. It was the mid-60s and acoustic music thrived in the streets and coffeehouses there. Smither forged lifelong friendships with many musicians, including Bonnie Raitt who went on to record his songs, “Love You Like A Man” and “I Feel the Same.

What quickly evolved from his New Orleans and Cambridge musical experiences is his enduring, singular guitar sound – a beat-driven finger-picking, strongly influenced by the playing of Mississippi John Hurt and Lightnin’ Hopkins, layered over the ever-present backbeat of his rhythmic, tapping feet (always mic’d in performance).

By the early 90s, Smither’s steady nationwide touring and regular release of consistently acclaimed albums cemented his reputation as one of the finest acoustic musicians in the country. Smither is best known for his great songs, like “Love You Like a Man” and “I Feel the Same,” both of which have been recorded by Bonnie Raitt.

Born in Wheeling, West Virginia in 1954, Grammy-winning singer-songwriter and multi- instrumentalist Tim O’Brien grew up singing in church and in school. After seeing Doc Watson on TV, became a lifelong devotee of old time and Bluegrass music. Tim started touring nationally in 1978 with Colorado Bluegrass band Hot Rize. His songs “Walk the Way the Wind Blows” and “Untold Stories” were Bluegrass hits for Hot Rize, and Country hits for Kathy Mattea. Soon more artists like Nickel Creek, Garth Brooks, and The Dixie Chicks covered his songs. Over the years, Tim has collaborated with his sister Mollie O’Brien, songwriter Darrell Scott, and noted old time musician Dirk Powell, as well as with Steve Earle, Mark Knopfler, Dan Auerbach and Sturgill Simpson.

Living in Nashville since 1996, O’Brien’s skills on guitar, mandolin, fiddle and banjo make him an in-demand session player. He tours throughout the US and abroad, most often with his partner Jan Fabricius on mandolin and vocals. His regular band includes Fabricius along with Mike Bub (bass) and Shad Cobb (fiddle). The International Bluegrass Music Association awarded him song of the year in 2006 and named him best male vocalist in 1993 and 2006. He was inducted into the West Virginia Music Hall of Fame in 2013.  A voracious reader who loves to cook, he has two sons, Jackson (born 1982) and Joel (born 1990).

Notable O’Brien recordings include the Bluegrass Dylan covers of “Red On Blonde,” the Celtic-Appalachian fusion of “The Crossing,” and the Grammy-winning Folk of “Fiddler’s Green.” His duet recording “Real Time” with Darrell Scott is a cult favorite, and he won a Bluegrass Grammy as part of “The Earls Of Leicester.” His 2017 release “Where the River Meets the Road” paid tribute to the music of his native West Virginia. O’Brien formed his own record label, Howdy Skies Records, in 1999, and launched the digital download label Short Order Sessions (SOS) with his Fabricius in 2015.