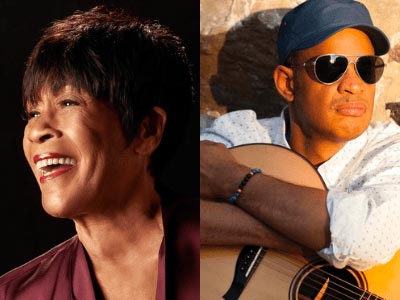 Soul singer-songwriter Bettye LaVette has been called the High Priestess of R&B. Her “pure Blues growl” and commanding presence have earned this Grammy-nominated performer comparisons to Aretha Franklin and Tina Tuner. Blind since birth, Raul Midón lives in a world of sound. His easy tropical groove, lyrical sophistication, silky voice and flowing electric guitar are his signature.

Hailed by the New York Times as “one of the great Soul interpreters of her generation,” Bettye LaVette is a vocalist who can take any type of song and make it completely her own. Bettye is one of very few of her contemporaries who were recording during the birth of Soul music in the 1960s and is still creating vital recordings today. To quote the late, great George Jones: “Bettye is truly a ‘singer’s singer’.”

Born in Michigan, her family moved to Detroit when she was six years old. Her parents sold corn liquor and her living room was oft-times visited by The Soul Stirrers, The Blind Boys of Mississippi, and many other traveling Gospel groups of the day. Unlike many of her contemporaries, Bettye did not get her start in the church, but in that very same living room, where there was a jukebox, filled with the Blues, Country & Western, and R&B records of the time. The “5” Royales, Dinah Washington, Bobby “Blue” Bland, Red Foley, …these were her roots.

By 16, Betty become enamored with showbiz. Singer Timmy Shaw brought her to Johnnie Mae Matthews, a notorious Detroit record producer. Bettye’s first single was My Man – He’s a Loving Man, in the fall of 1962. The record was quickly picked up by Atlantic for national distribution. The record charted #7 R&B and put her on her first national tour, with Ben E. King, Clyde McPhatter, and another newcomer, Otis Redding.

“Bettye has always had big ears and a wide open mind, preferring to fulfill the role of a song interpreter, rather than attempt to write her own material. Bettye’s near mystical ability to get inside a song’s lyric, melodic line and harmonic implications, in the process invariably making anything she covers her own, stems from the tutelage and guidance of her late manager Jim Lewis. A veteran of the big band era having played with the screaming and stomping Buffalo-based Jimmie Lunceford Orchestra, Lewis managed LaVette for ten years beginning in 1968 and constantly harped on her to listen to master song interpreters such as Sarah Vaughan and Frank Sinatra, pointing out the intricacies of phrasing and timbre manipulation that are part and parcel of the sonic art of any truly great vocalist.” – producer Rob Bowman

Detroit’s Soul singer-songwriter Bettye LaVette had a few hit records in the 1960s and then disappeared — sort of. As NPR puts it, “Bettye Lavette’s career has been a slow burn. It’s allowed her to fully develop her astonishing vocal gift and granted her artistic license to sing whatever she pleases.” The outlet continues, “[she] has a buoyancy to her, a positive attitude you can feel just through her voice. It’s an attitude that’s kept her making music through all the ups and downs of her almost 60-year career, and one that seems to keep her from ever slowing down.”

In 2018, the Rhythm & Blues Hall of Famer and six-time Grammy nominees released an album of Bob Dylan songs, Things Have Changed, and in 2022, she was back with Blackbirds, an album of her reinterpretations of songs popularized by some of her favorite Jazz singers like Dinah Washington and Nina Simone.

Singer-songwriter and guitarist Raul Midón is on an undeniable roll. After Grammy nominations for his two previous releases – Bad Ass & Blind and If You Really Want, each for Best Jazz Vocal Album – he returns with his 11th studio album: The Mirror, released in March 2020. The Mirror finds Midón breaking new ground for himself, including two entrancing solo spoken-word pieces. The album also features studio meetings with such veteran Jazz colorists as vibraphonist Joe Locke (“A Certain Café”), as well as a songwriting collaboration with top pianist Gerald Clayton, “Deep Dry Ocean.”  As NPR set the stage before his captivating edition of its “Tiny Desk Concert” broadcast: “Raul Midón lives in a world of sound. Blind since birth, Midón’s interpretation of his surroundings is borderless. He sings with the passion of the best classic Soul singers, and his instrumental chops stand alongside the most accomplished Jazz musicians.”

Along with his 11 studio albums as a solo artist, Midón – dubbed “an eclectic adventurist” by People magazine – has collaborated with such heroes as Herbie Hancock, Stevie Wonder and Bill Withers, along with contributing to records by Queen Latifah and Snoop Dogg and the soundtrack to Spike Lee’s She Hate Me.

Midón’s signature is his combination of silky voice and percussive guitar. His playing is a syncopated wonder in which bass, harmony and melodic lines fly from the fretboard in a way that belies the fact that all the music is being produced by just two hands.

The title of Midón’s Bad Ass & Blind album came from an apt description of its maker that Soul icon Bill Withers endorsed; the 2017 release saw Midón collaborating with such top Jazz players as trumpeter Nicholas Payton, pianist Gerald Clayton and drummer Gregory Hutchinson. NPR noted that the disc continues Midón’s “streak of records that cross boundaries with ease and head-turning musicality.” Midón’s 2018 follow-up, If You Really Want, found Midón’s voice and guitar riding the waves of the Metropole Orkest, the Grammy-winning Dutch ensemble that has collaborated with artists from Al Jarreau and Elvis Costello to Laura Mvula and Snarky Puppy. Midón worked hand in glove on If You Really Want with another renowned Grammy winner: arranger and conductor Vince Mendoza. Relix magazine said about the album: “Throughout, there’s that voice – passionate and confident – with Midón giving each word his full attention so that you know he means it.”

Ever since being told by some when he was a child that his blindness meant that “you can’t do this, you can’t do that,” Midón has lived a life devoted to beating the odds and shattering stereotypes. “As someone who has never seen, I’ve always felt at a disadvantage in that lyric writing is usually very visual,” he says. “People really relate to images and I’ve never seen images. But what I realized early on is that you have to write from what you know, and I hear, touch and feel intensely – and those are sensations and experiences that everyone can relate to.”